Generation Y is the leading edge.

February 2004 survey results indicate that 62% of Gen Y internet users have ever used IM.  This figure is significantly higher than any proportion of internet users in other generations.  By contrast, the next largest group of instant messengers fall within the Gen X category at 37%.  However, older Americans log on to IM in substantial numbers, too.

Although most instant messengers still use email more frequently than IM, the disparity between email and IM use varies greatly between generations.

Of those who rely on instant messaging more often than email, Gen Yers lead the pack at 57%, compared to 16% of Gen Xers, 18% of Trailing Boomers, 18% of Leading Boomers, and less than 1% of the Matures and After Work populations.

Meanwhile, of those who email more than instant message, Gen Yers come in third at 19%, behind Gen Xers and Trailing Boomers (both 24%).

Younger generations tend to stay on IM longer once they have logged on.

In the February 2004 survey, Pew Internet found that among the different generations of Americans, there are no major differences in frequency of logging onto instant messenger programs.  However, once logged on, younger IM-ers are more likely than their older counterparts to instant message for longer periods of time, which perhaps may be explained by the great numbers of peers in this cohort who also use IM, suggesting that there simply may be more people for those in this age group to talk to over IM. 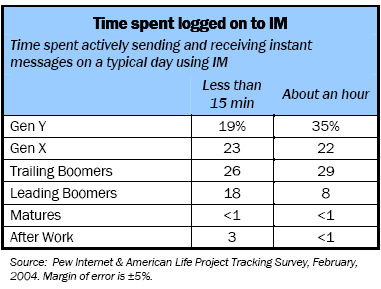 Gen Y instant messengers manage their buddy lists much more actively than other IM users. Fourteen percent of Gen Y-ers add someone new to their buddy list at least once a week, an activity that 2% or less of every other generation engages in. Gen Y-ers are also more likely to engage in several separate IM conversations at the same time. Nearly a third (29%) do so everyday – a percentage that is more than double the next highest proportion.

Gen Y-ers who use IM are also more likely to take advantage of the away message feature, posting messages daily and employing them as canvases for creative self-expression.  Gen Y-ers are least likely to use the standard away messages provided by IM software programs, opting instead to creating their own messages. Finally, Gen X and Gen Y-ers are more likely than older Americans to multitask by carrying out other computer-related tasks or non-computer activities, such as talking on the phone or watching television.

Gen Y and Gen X are the most zealous practitioners of alternative IM activities.

In the February 2004, Pew Internet asked IM users if they ever used IM to carry out five other tasks.  Y and X generation IM-ers reported doing so in greatest numbers.

Next: Part 4. IM at work: Instant messaging has become a familiar reality in some offices
← Prev Page
Page1Page2Page3Page4You are reading page5Page6Page7Page8
Next Page →

Internet ActivitiesWork and Employment
Defining generations: Where Millennials end and Generation Z begins
25% in U.S. see at least some truth in conspiracy theory that COVID-19 was planned
Are you in the American middle class? Find out with our income calculator
Americans Who Mainly Get Their News on Social Media Are Less Engaged, Less Knowledgeable
Americans Fault China for Its Role in the Spread of COVID-19