Americans use IM and its many special features for a variety of purposes in their lives. In addition to conducting conversations, IM users post profiles and add people to buddy lists to expand their social circles.  IM users also take advantage of features such away messages to not only make themselves perpetually accessible to their buddies, but as a form of personal expression as well.  The following discussion is based on analysis of the 511 adult internet users in our sample who use instant messaging. 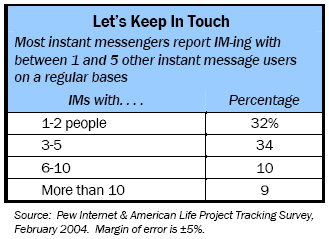 In response to the question, how often do you log onto instant messaging, 36% of IM users said they login once a day or more frequently. Twenty-seven percent login a few times a week and 37% use IM less often.

In a typical session, IM users generally spend just a few minutes instant messaging. Forty-seven percent of IM users say they actively IM for 15 minutes or less during their usual IM sessions; another 26% IM between 15 minutes to an hour on an average session. The remaining IM users (22%) are the hardcore users who actively send and receive IMs for more than an hour during their sessions on a typical day.

Many create online identities through IM.

IM users also take advantage of the features in some IM programs, most notably AIM and ICQ (owned by AOL), to reach out to others beyond their immediate acquaintance. A third of IM users (34%) have posted a profile for their IM screen name that others not on their buddy list can see.  Other instant messengers using the same IM program can conduct random searches, locate an individual, and contact them.

These profiles have included information like contact information (such as email addresses or phone numbers), important personal news, inspirational quotes or funny sayings, links to interesting or compelling web sites, and links to personal photos at online photo web sites.

Funny quotes or other sayings are the most popular form of profile content, with 42% of profile creators including them in their online space.  Contact information is also included by a third of profile holders.  Fewer profile creators have links to interesting or funny web sites (18%) or links to personal photos hosted on other public sites (12%). An even smaller number (9%) of profiles include important personal news.

In addition to establishing an online persona through a personal profile associated with a particular IM user name, other IM users simply create multiple screen names used to communicate with different people from different parts of their lives. 17% of instant messaging users use different instant messaging handles for school, work and personal use.

A contact list, a.k.a. buddy list, is an instant messaging feature that allows the IM user to see who among his self-selected set of “buddies” is online and who is not.  The list owner creates a file of other IM users with whom he or she would like to communicate.  Unless other privacy features are installed, a user will always be able to track his buddy’s presence, and vice versa.

The blocking feature available on most IM software programs allows an IM user to control who can see and communicate with them.  The user can “block” other buddies or any other unrecognized members from detecting their presence online.

Most IM users do not take advantage of the blocking feature.  78% of instant messengers report that they block someone less than every few months or never.

How users experience unsolicited IMs and SPIM, and the protective measures they take.

Half of all IM users (51%) have received an unsolicited instant message from someone they did not know. A little bit less than half (47%) of IM users have used the IM program to block someone from sending them instant messages. And just over half of IM users (54%) have ever removed a buddy from their buddy list. Users have tools they can employ to protect themselves.  Most instant messaging programs allow users to set up different levels of security from allowing any Instant message through, to pop up windows announcing the IM of someone not on a buddy list, to exclusive, or “white list” settings, that only allow instant messages from people already loaded into the buddy list of recipient.

Instant message buddy lists allows other users in your IM network to know when you are on the network or not. But because many users may remain logged into the network, but not actually physically in front of their computers (or able to answer their wireless devices), many users have begun to take advantage of the “away” message function available on some instant messaging programs. The away message function allows users to post either a pre-set or customized message to tell other contacts where they are, something about themselves, or any other short message.  Around 18% of adult IM-ers post away messages every day or almost everyday.  More than a third of this group are full-time or part-time students.

Among these fervent users of away messages, the messages they post don’t always contain information about their whereabouts. Research by Naomi Baron at American University outlined a number of categories of overt purposes for away message use by college students. In some cases, the messages are simply conveying “I’m Away,” but other messages are intend to initiate contact or help plan a social event, to send messages to particular other people, to convey personal information about the message poster or to entertain others who might be reading them.3

Recent Pew Internet Project data supports Baron’s findings. Of those IM users who post away messages, 63% have used the standard messages provided by their IM program, while 45% of away message users post a specific message about what they are doing or why they are away.  It is important to note that some programs do not allow for customization of away messages, confining their users to 6 or 7 options.

Twenty-one percent of IM users post a quote or a thought for the day in their away message, and 12 percent use it to switch communication media by posting a phone number where they can be reached.

It should be noted that a little more than half (53%) of all instant message users never use the away message function. Most users of the away message feature generally almost never or never use it (14% use less than every few months, 53% say they never use it), or they use it all the time (18% say everyday or almost everyday.)

Other uses of IM

IM is more than a forum for dialogue.  Users enhance the interactive experience of IM by transmitting files in real-time, allowing others to experience “instant” gratification.

Next: Part 3. The IM gap: How different people use IM
← Prev Page
Page1Page2Page3You are reading page4Page5Page6Page7Page8
Next Page →

How Americans Use Instant Messaging
The advent of spim
Teens and Technology
Surprising, strange, and wonderful data
Teenage Life Online
Defining generations: Where Millennials end and Generation Z begins
The 2020 Trump-Biden matchup
What We Know About Gen Z So Far
U.S. Image Plummets Internationally as Most Say Country Has Handled Coronavirus Badly
How Trump compares with other recent presidents in appointing federal judges