53 million American adults use instant messaging and its appeal is especially apparent among young adults and technology enthusiasts.1

Recent Pew Internet & American Life surveys reveal that more than four in ten online Americans instant message (IM). About 11 million of them IM at work and they are becoming fond of its capacity to encourage productivity and interoffice cooperation.  At the same time, IM usage varies widely across different age groups.   Instant messengers utilize IM not only as a way to expand and remain connected their social circle, but also as a form of self-expression.

Although most IM users still use email more frequently than IM, a significant number are turning to IM more often than they do email.

Although most internet users favor email over IM as a form of communication, nearly a quarter of IM users say they instant message more than they email:

IM is moving into the American workplace.

Is IM a distraction at work that keeps people away from their tasks? When asked who they contact most often during IM sessions at work, 40% of at-work IM users indicated they generally instant message coworkers, 33% reported friends and family, and 21% interact with both groups equally.

At-work IM users report feeling positively about how instant messaging improves workflow and the quality of the work-day. But some think that the use of IM encourages gossip, distracts them, or even adds stress to the workplace.

In July, this is how the IM universe broke down, according to comScore Media Metrix measurements:

The July figures from comScore also show that women as a group spend significantly more time online than men. During the month, the average woman IM user spent 433 minutes trading instant messages and the average man spent 366 minutes. In addition, the figures indicated that those living in lower income households were more ardent users of IM than those in upscale homes. That was also the case for households with children in them. They were more active users of IM than those that had no children.

A majority of IM users say they do other things on their computer and online at the same time they are participating in IM sessions.

Instant messengers often utilize special features to enhance their ability to communicate and stay connected with other IM users. Yet, they do not spend a great deal of time using the exclusionary features, such as blocking and removing buddies.

About 45% of IM users – close to 24 million people – post “away” messages on their IM programs that allow those who access their accounts to get information about where they are, what they are doing, or read a message of some kind, such as an amusing quotation. In addition, 34% of IM users have created profiles that others can see.

In addition to chatter, IM users are becoming fond of the other features IM programs offer.

Below are some other key findings. 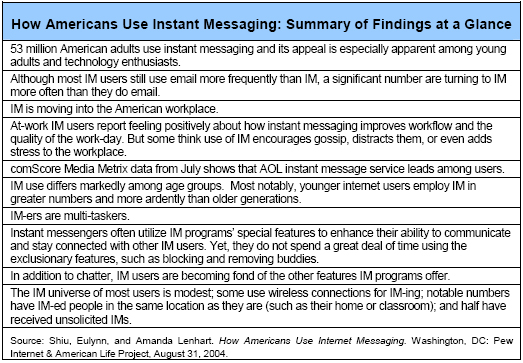 How Americans Use Instant Messaging
53 million adults trade instant messages and 24% of them swap IMs more frequently than email. IM also gains a following in U.S. workplaces
Acknowledgements Part 1. Introduction: The basics of instant messaging Part 2. Patterns of IM use: What IM users do online Part 3. The IM gap: How different people use IM Part 4. IM at work: Instant messaging has become a familiar reality in some offices Part 5. Other ways people use IM Methodology