A fact that continues to stun the technology community, its adherents, and many online Americans is that more than half of non-Internet users – 56% of them – say they probably or definitely will not ever go online.

In April 2000, we asked non-Internet users whether they wanted to go online or not—and only 16% said yes. When we asked the question again in May 2002, the response was the same, with a mere 14% of non-users saying that they would like to go online. Then we asked, “How likely do you think it is, if at all, that you will start using the Internet or email someday?” Forty percent thought they definitely or probably would go online. Most of the rest do not have any interest in using the Internet.

What are the differences between those non-users who say they think they will go online some day and those who think they will not? Those who believe that they will some day go online are generally non-white, urban or suburban residents, and they are younger than non-users as a group. They are evenly divided between men and women. And they are somewhat more likely than their adamantly not online counterparts to be parents. Those who say they will never go online are as a group more white, poor, elderly, rural residents and Southern.

Older Americans are less likely to be online and less interested in taking the plunge than younger Americans.  Among those who say they will never go online, 71% are over 50, and 41% are over 65. The relatively small number of those age 18-29 who do not now use the Internet overwhelmingly believe that they will go online eventually. A mere 6% of those who say they won’t go online are young non-users.

Workforce participation has major bearing upon whether or not non-users think they will ever use the Internet. Non-users who are employed are almost three times more likely than retirees to say they think someday they will go online. These adamant non-users are also more likely to be disabled and unable to work. 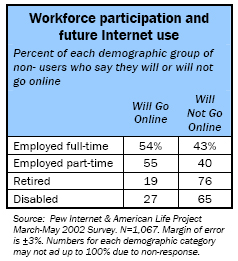 Non-users who believe that they will go online eventually are more likely to be black or Hispanic than other non-Internet users. Sixty-two percent of whites who do not now use the Internet say they will never go online, compared to only 39% of offline black Americans and 38% of offline Hispanics.

As a group, parents of minor children living at home are generally more likely than non-parents to be Internet users. The parents who do not now use the Internet are relatively more likely than offline non-parents to say they plan to start going online eventually. Some 56% of parents who don’t go online think they will go online some day. Non-parents are the reverse with barely a third (34%) saying they will go online some day.

The poorest non-users are also the most pessimistic about an online future. Only 38% of them believe they will ever go online. Next are the wealthiest users—44% of them believe that they will go online someday. In the middle-income ranges are the most positive users, with more than half (51%) of those living in households earning between $30,000 and $75,000 annually saying they will use the Internet someday.

The more formal education a non-user has, the more likely she is to believe that some day she will go online. Of those without a high school diploma, only a quarter (25%) believe that they will eventually go online. The percentage steadily climbs as educational attainment grows: 45% of offline high school graduates think they will use the Internet, and 52% of offline college graduates say the same.

Next: Part 5. A new understanding of Internet use
← Prev Page
Page4You are reading page5Page6Page7Page8Page9Page10Page11Page12Page13Page14
Next Page →