In our survey we tried to explore several other aspects of people’s lives that might be related to whether they go online or not. The results indicate there are several other factors that influence or relate to going online or staying offline.8

First, a person’s sense of efficacy can make a difference in her decision to go online or not. Those who say they are in control of their lives are more likely to be online than those who feel they have less control over things. While it is not possible to assert causality definitively, it seems reasonable that those who have convenient access to a great deal of information and those who have multiple ways to communicate with others would feel more in control over their lives.

Second, a person’s media use is related to Internet use. People who on a typical day read a newspaper, watch television shows or television news are more likely to be Internet users. It is unsurprising that those who seek information, content and entertainment in other media, would also be attracted to the Internet.

Third, technology adoption also affects Internet use. Americans who own a cellphone, and/or a Personal Digital Assistant or other handheld computer, are, independent of all other factors, more likely to be Internet users. 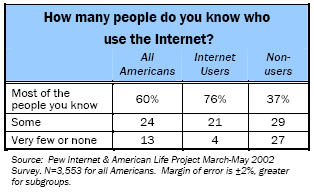 Fifth, a person’s social “nearness” to the Internet matters. Non-users are less likely than users to know many Internet users.

Sixth, physical access is still a problem for some. Much of previous research on the digital divide has focused on questions of access: Could a person get somewhere where he can use the Internet, and at a reasonable cost? With the e-Rate wiring schools and libraries, and the expansion of community technology centers, that initial concern about physical access has mostly been mitigated. Still, non-users are less likely than Internet users to know of a public place to access in their communities. Fully 22% of non-users say they do not know if there are public access sites to the Internet in their community.

In addition to the factors discussed above, the Pew Internet and American Life Project investigated other possible factors that might relate to people’s use of the Internet. However, we found no compelling evidence that several other hypotheses were valid. For instance, we found no support for the idea that extroverts were more likely than introverts to use the Internet. Similarly, there was nothing in our data to suggest that a person’s basic level of trust in other people and institutions was tied to Internet use. We also tried to probe whether people’s community involvement was connected in some way with Internet use. The results are inconclusive. Some types of community involvement show a negative effect with Internet use, meaning that people who are involved in some kinds of community activities are less likely to be online. Other kinds of community activities show the opposite effect, predicting that those who do these activities are more likely to be online. The effect of community involvement on Internet use is not clear, and is a likely location for future research by the Project and others.

Next: Part 7. The Disabled: A Special Analysis
← Prev Page
Page4Page5Page6You are reading page7Page8Page9Page10Page11Page12Page13Page14
Next Page →