We asked non-users why they do not go online – an admittedly difficult question because people often find it hard to talk about something they do not do and find it hard to articulate the reasons they do not do it. Many non-users simply said they did not want or need to access the Internet, that they were not interested, and did not have the time to use it. A number of respondents have severe disabilities (blindness, stroke, head traumas), which render them unable to use the Internet, and others say they lived with someone who either monopolized the machine so they could not get access or who could look up and access information for them if they needed something online.

Other non-users were concerned about the cost or about becoming addicted to the Internet. Still others had had their fears realized; one respondent’s identity was stolen online, and another’s “wife used it to talk to other guys.” 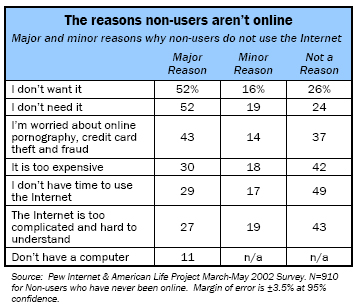 Several respondents felt they were too old to learn something new, or believed that their hardware was too old to connect to the Internet. Others felt that they lacked the skills to use the computer or the Internet, or reported that they did not like computers much, including the respondent who had “enough problems with [my] answering machine.”

“I don’t want or need the Internet”

More than half—52%—of non-users said that lack of need or desire was a major reason why they were not online. Older Americans, women, rural and suburban non-users and whites were among the most likely to cite their lack of interest or need to be online.

In some cases, people have a clear idea of what the Internet is like, and they just aren’t interested in it. In other cases, people harbor misconceptions about the content of the Internet. One of our focus group participants told us that she had avoided the Internet in the past because she thought it was “just for businesses.” In yet more cases, respondents’ lack of desire often accompanies a sense that “the Internet isn’t for people like me.”

Concern about safety and unsavory content online are major reasons a plurality of non-users are offline. Forty-three percent of non-users said that worries over online criminal activity and pornography kept them off the Internet. Women, parents, Americans over age 30, and those with high school diploma or less education were more likely to report concern over online content. Whites were more likely to express worry over online content and crime than black or Hispanic non-users.

A number of focus group participants mentioned that fear for their own or their children’s safety made them reluctant to go online. In many cases, these users were unaware of ways they could safeguard themselves and their families (using filters, not giving out information, installing technological solutions, educating themselves about how to avoid what they do not wish to encounter online) and held misconceptions about the level of risk for things like credit card fraud.

Other new users reported they did not want to venture into chat rooms specifically to avoid unpleasant or worrisome interactions. “I was concerned about the chat rooms…something came on [the screen] that said ‘chat room’ and I just shut the whole thing off,” reported one group member of one of her initial forays online. Another female group participant said, “The only thing I worry about is about bad people who get on the Internet and lie to you, especially for kids…I mean, my daughter might be using this computer and someone decides to take advantage of her because she doesn’t know what she’s doing. That’s the only thing I’m afraid of.”

Thirty percent of non-users say cost is the major reason they remain offline, and close to a fifth of non-users say cost plays a minor role. Forty-three percent of non-users agreed with the statement “Internet access is too expensive,” up a tick from 40% in 2000. As in 2000, a very high number of respondents chose not to answer this question; 28% did not respond in the current survey. Women, Hispanic and African-Americans, poorer Americans and those who live in rural or urban areas are most likely to point to cost pressures as a major reason why they aren’t online.

“I don’t have time to use the Internet”

A little less than a third (29%) of non-users said that lack of time was a major impediment to Internet use, though close to half (49%) of users said that lack of time was not a factor at all.  Time crunches are more likely to affect younger Americans, and those earning greater incomes, those with less education, as well as those who live in rural areas. Parents are slightly more likely than non-parents to cite lack of time as a reason why they do not use the Internet. For some non-users, including several members of our focus groups, their disinterest in going online is not just a matter of the time squeezes in their own lives. They also report that they do not believe that use of the Internet is a good use of their time.

“The Internet is too complicated and hard to understand”

Some non-users made it clear they thought the Internet was hard to use. A little more than a quarter said that the Internet’s complexity was a major reason why they did not use it, and another 19% said it was a minor reason. Two in five (40%) non-Internet users agreed with the statement “the Internet is confusing and hard to use.” Those non-users with lower education and income levels, and women are more likely to report believing that the Internet was too complicated and hard to understand. Whites and blacks were more likely than Hispanics to say that difficulties with use and comprehension were major reasons why they weren’t online. Hispanic non-users tended to cite this as a minor reason.

Related to this concern is the worry of some non-users that they will not be able to learn how to use the Internet. One woman expressed her reservations this way: “I’m mostly concerned that I won’t catch on to certain areas of it. Because when I did take [computer class] in high school, I felt it was very hard…so I didn’t really like it. But now I’m interested in it again, so…I might stick with it if it’s a smaller class…I figure that we can get more attention here [at the community technology center] than we could in a big class.”

Embarrassment and worry about breaking the technology: “The Monster in the Basement”

Though we did not pick up direct evidence of embarrassment as a factor in our survey, it was something people discussed in our focus groups. Respondents told us that they were discomfited by their lack of computer skills, and some were worried that they would need to acquire certain skills, like typing, before they could learn to use the Internet. A novice user told the story of going to get his haircut and being told by the woman behind the counter at the hair salon to sign in on a computer terminal in the waiting area. He was embarrassed when he could barely figure out how to use the keyboard to punch in his name, and resolved then to come to the Community Technology Center in his apartment complex to learn to type, use computers and the Internet.

Others said they had been afraid to use computers prior to coming to the community center because they were afraid that they might break the computer, or accidentally ruin a document or program. Some feared the machine itself. An interviewee told us of how she had purchased a computer at the urging of her neighbor (a government IT professional) and how she was so intimidated by it that she left in untouched for more than a year, referring to it as “The Monster in the Basement.”

“I don’t have a computer or Internet connection”

Eleven percent of our respondents said that the lack of a working computer or functional Internet connection kept them from going online. These non-users are more likely than other non-users to live in the suburbs, more likely to be female and are slightly more likely to come from households with lesser amounts of income. Overall, 31% of Americans say they do not use computers.

Two men we interviewed said that among their circle of friends, it was the wives who used the computers to email each other, and that the men did not use the Internet. Men in their social circle do not use the Internet, they said, often because their wives knew more about the Internet than they did. They noted that they did not want to be embarrassed or told what to do by their spouses or children. One male participant said, “They [men] feel embarrassed that their kids, their wives know more than they do.”

Poor language skills also impede some non-users. One novice user, whose first language was Spanish, told of his difficulties with reading and writing in English: “If I read it, I know what it is…But if I have to write something, I don’t know how.” He explained that his lack of proficiency in English writing made typing a big challenge. The National Adult Literacy Survey by the U.S. Department of Education estimates that up to 23% of the U.S. population struggles enough with literacy that they have difficulty completing everyday tasks.

Next: Part 3. What non-users think about the online world
← Prev Page
Page1Page2You are reading page3Page4Page5Page6Page7Page8Page9Page10
Next Page →