Non-users and users have different ideas of what the online world is like. Generally, non-users agree that the Internet has positive attributes such as connecting people to others and helping them to find information easily. But these favorable views are held by significantly fewer non-users than by Internet users. In addition, the positive attitudes of many non-users are tempered by fears that the Internet is a dangerous place, that its cost is beyond their reach, that its content holds little of meaning for them, and that they do not want to waste precious time online. Some non-users doubt their ability to master the complexity of computers and the Internet. In the end, the disadvantages of going online outweigh the advantages for the majority non-users, while a smaller group of other non-users feel positively about the Internet but are currently frustrated by other obstructions that keep them offline.

We asked all respondents in the survey their reaction to a variety of statements about the Internet. The table below reports the results of non-Internet users. Invariably, Internet users have a more positive view about the Internet than non-users. Levels of agreement and disagreement have remained stable since Pew last surveyed on this subject in 2000. 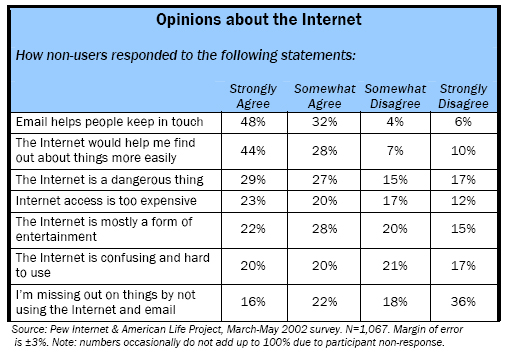 Opinions about the internet

“The Internet would help me find out about things more easily.” Almost three quarters (72%) of non-users believe this is true. The greatest portion of respondents (44%) said they “strongly agreed” with that statement.

What non-users would do if they went online

Many non-Internet users think of the Internet as large library, a place or tool for research. Thirty-one percent of non-users who thought that they would eventually go online, felt that they would use the Internet primarily for general research, searching for things as disparate as comparisons of prices on plane tickets or DVD players or looking for information about favorite historical figures or hobbies.

Others emphasized the communications functions of the Internet. Eleven percent said if they went online, they would email, instant message or talk to others in chat rooms. Smaller groups said they would shop online, or just surf the Web to see what it offered. Others would read up on news, sports or weather, play games and do specific research–like on genealogy. 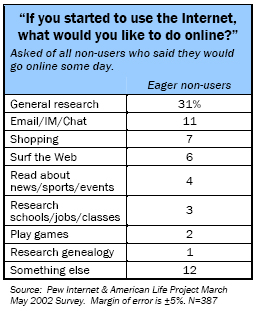 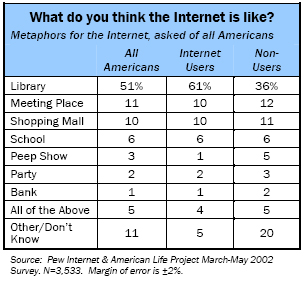 Next: Part 4. The intentions of non-users
← Prev Page
Page1Page2Page3You are reading page4Page5Page6Page7Page8Page9Page10
Next Page →