Close to 13 million teenagers use instant messaging and this techno-communication has a key place in many of their lives. Talking to buddies online has become the information-age way for teens to hang out and beat back boredom. For most online teens, instant messaging has not replaced the telephone as the principle communications tool they use with their friends. But a fifth of online teens do say that IM (instant messaging) is the main way they deal with friends. A typical IM session for a teenager lasts more than a half hour, involves three or more buddies, and often includes friends from outside her community. And significant numbers of youth have used instant messages for serious kinds of communications such as telling their friends unpleasant things or starting and ending relationships.

Many teens manage and play with their online identities

Most online teens use different screen names and email accounts to manage their communications and the information that comes to them. Significant numbers also say they pretend to be different people and that they have been given false information by others. A quarter of online teens have built their own Web pages.

At times, parents and teens don’t see eye to eye about the Internet and their family

At times, the role of the Internet at home generates struggles.

Some 57% of parents worry that strangers will contact their children online. These worries are well grounded. Close to 60% of teens have received an instant message or an email from a stranger and 50% report emailing or instant messaging with someone they have not met before. Despite this, teens themselves are not particularly worried about strangers online; 52% of online teens say they do not worry at all about being contacted online and only 23% express any notable level of concern.

In addition to checking up on their children and sitting down with them on occasion while they are online, parents have tried to take other precautions.

The Internet helps at school

A tenth of American teens (11%) get their primary or only access to the Internet through their school. There is strong agreement among parents and teens that use of the Internet helps youth at school.

Online material is a teaching tool outside school, too

In addition to being a key resource for school, material on the Web teaches children in other ways. It helps establish their tastes and fills in their gaps of knowledge on sensitive subjects. 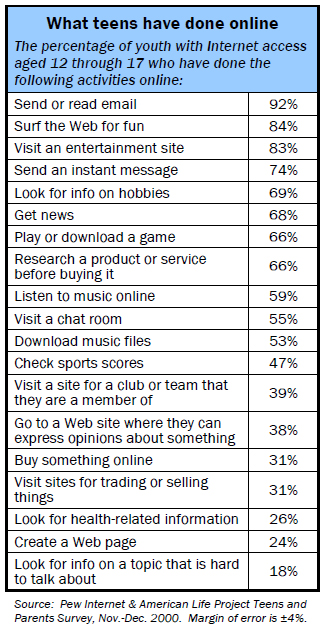 Not all teens use the Internet in the same way

Next: Acknowledgements and About Us
← Prev Page
You are reading page1Page2Page3Page4Page5Page6Page7Page8
Next Page →