The number of U.S. Hispanics eligible to vote (U.S. citizens ages 18 years and older) is estimated to reach a record 27.3 million, up by nearly 4 million since 2012 alone. Yet, the Pew Research Center survey reveals that the share of Hispanic registered voters who say they are “absolutely certain” they will cast a ballot this year is smaller than the share of those who said this in 2012. The new poll also shows that planning to vote among Hispanic registered voters once again trails that of the overall registered voter population.

Compared with 2012, the share of each major demographic subgroup of Latino registered voters that say they are absolutely certain they will vote is down. This decline was marked among English-dominant Latinos (12 percentage points), Millennials2 (13 points) and those with some college education or more (10 points).

The new survey asked this group of Hispanic eligible voters, too, if they plan to cast a ballot in November. With the election date fast approaching, just 30% of unregistered Hispanics say they are absolutely certain they will vote this year. 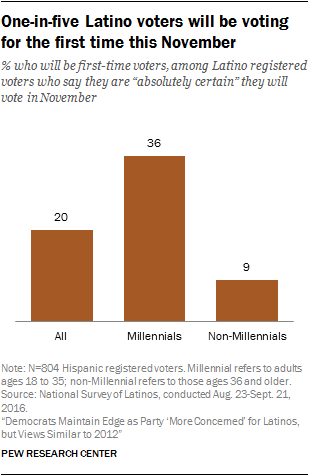 Among Latino registered voters who are “absolutely certain” they will vote in the coming election, 20% will be voting for the first time. As would be expected, Millennial Latinos are more likely to say they will be first-time voters (36%) than non-Millennial Latino voters (9%). Some 3.2 million young Latinos entered adulthood between 2012 and 2016, accounting for three-quarters of the growth in the Latino electorate.

Additionally, there are other Latino demographic subgroups that have large shares of first-time voters.

About a quarter (26%) of Latino voters who speak Spanish as their primary language are first-time voters this year. By comparison, 16% of English-dominant Latino registered voters are voting for the first time in 2016. And Latino registered voters with a high school degree are more likely than those who have some college education or more to say this year will be their first time voting (31% vs. 16%).

In the last few years, many states either have passed or considered passing laws that would require potential voters to show official photo identification before casting a ballot on Election Day. Currently, according to the National Conference of State Legislatures, 16 states – Alabama, Florida, Georgia, Hawaii, Idaho, Indiana, Kansas, Louisiana, Michigan, Mississippi, Rhode Island, South Dakota, Tennessee, Texas, Virginia and Wisconsin—have such laws in effect for 2016. These developments could have an impact on Latino voter turnout. Together, these states hold 37% of all Latino eligible voters.

Among Latinos who are not voting this year, dislike of the candidates is top reason cited

Latino voters have long had one of the lowest turnout rates of any group in past presidential elections, with 52% of those eligible to vote not casting a vote in 2012, for example. Among Latino eligible voters who say they will not vote, dislike of the candidates is the main reason given by 33% of them, while 22% say they are not interested in the election or feel their vote will not make a difference.

Next: 2. The Latino vote in the 2016 presidential election
← Prev Page
Page1You are reading page2Page3Page4Page5Page6Page7Page8
Next Page →

Democrats Maintain Edge as Party ‘More Concerned’ for Latinos, but Views Similar to 2012
1. Latino voter interest and engagement in 2016
2. The Latino vote in the 2016 presidential election 3. Views of the nation’s direction and 2016’s top issues 4. Latinos and the political parties Acknowledgements Methodology Appendix A: References