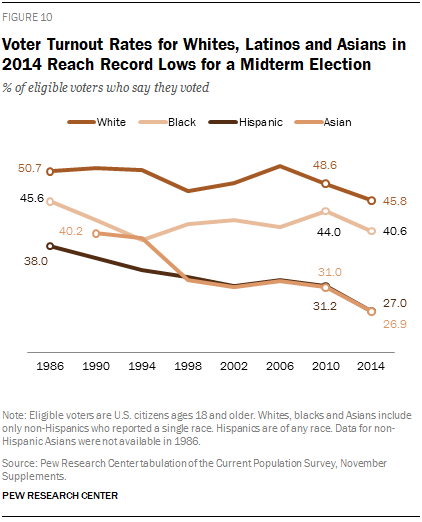 Nearly 6.8 million Hispanics voted in the 2014 congressional election, a record total. But the voter turnout rate among Hispanics fell to 27%, the lowest rate ever recorded for Hispanics in a midterm election. 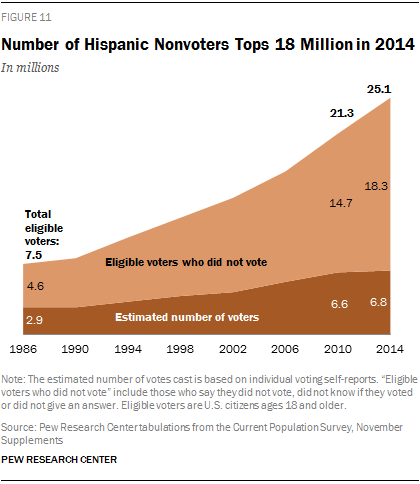 While a record number of Hispanics voted in 2014, another new high was reached. In 2014, the 18 million Hispanic eligible voters who did not cast a ballot—i.e., nonvoters—outnumbered those who did by nearly three-to-one.

The Hispanic electorate’s participation in midterm elections continues to be below what might be expected given the rapid growth of the group’s overall population and number of eligible voters. In 2014, the number of eligible Hispanic voters reached 25 million, up from 21 million in 2010. Much of this growth is due to the coming of age of 3.8 million U.S.-citizen Hispanics between 2010 and 2014. But it is this very group of young people, millennial Hispanic eligible voters, that has the lowest voter turnout rates among major Hispanic demographic subgroups—15.2% in 2014, down from 17.6% in 2010. 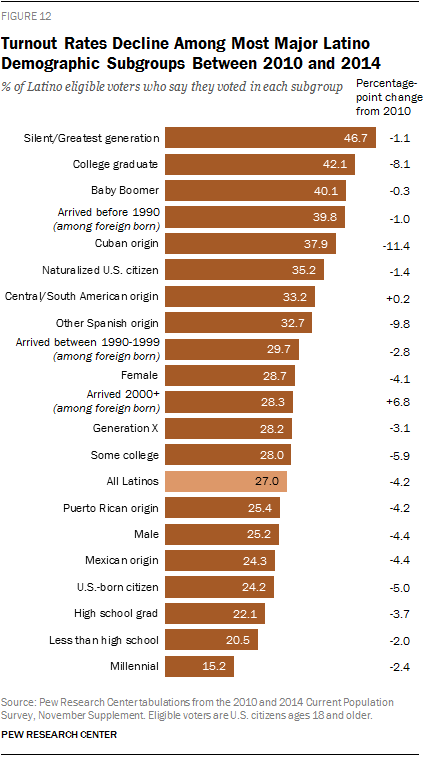 While Hispanic voter growth in 2014 was up just slightly relative to 2010, the number of registered Hispanic voters grew at a faster pace. In 2014, the number of Hispanic registered voters reached 12.9 million—a record for a midterm,[ 7. The estimated number of Hispanic registered voters is based on self-reports from the November Voter Supplement of the 2014 Current Population Survey.] up 1.9 million, or 17.1%, between 2010 and 2014. Among registered Latino voters, the voter turnout rate was sharply lower in 2014 compared with 2010—52.7% versus 60.5%.

Why Latino Registered Voters Did Not Vote in 2014 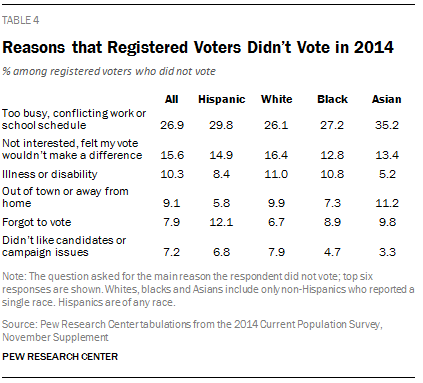 The Census Bureau’s survey of voters asks those who registered to vote but did not cast a ballot why they did not vote. Among all registered voters who did not vote in 2014, the most common reason given was “too busy, conflicting work or school schedule.” This reason was cited by 26.9% of respondents. The second-most common reason given, at 15.6%, was “not interested, felt my vote wouldn’t make a difference.”

“Too busy, conflicting work or school schedule” was the top reason given for not voting among all racial and ethnic groups, with 35.2% of Asians, 29.8% of Hispanics, 27.2% of blacks and 26.1% of whites citing it. The second-most common reason given across all groups was “not interested, felt my vote wouldn’t make a difference,” with 16.4% of white nonvoting registered voters, 14.9% of those who are Hispanic, 13.4% Asian and 12.8% black giving that reason.

One other reason offered for not voting was “forgot to vote.” Overall, 7.9% of all registered voters who did not vote cited this as the reason. But among Latinos, 12.1% cited this reason, making it the third-most common answer among the group. 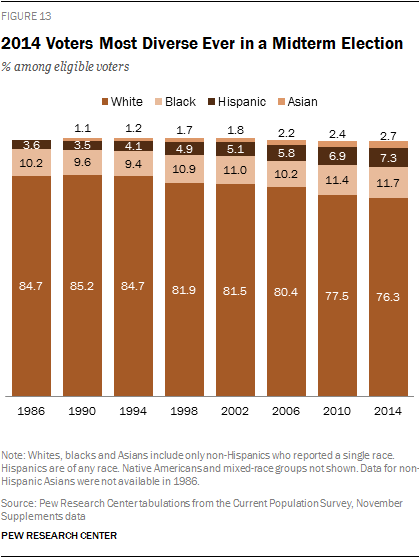 In 2014, Latinos supported Democratic candidates over Republican candidates in congressional races 62% to 36% (Krogstad and Lopez, 2014b).

The Census Bureau’s biannual Current Population Survey November Voting and Registration Supplement is the best survey of voting behavior available because of its large sample size and its high response rates. It is also one of the few data sources that provides a comprehensive demographic and statistical portrait of U.S. voters (official voting records often do not contain voters’ full demographic details).

But estimates based on the CPS November Supplement often differ from official voting statistics based on administrative voting records (Lopez and Taylor, 2009). This difference may come from the way the CPS estimates voter turnout—through self-reports (which may overstate participation) and a method that treats non-responses from survey respondents as an indication that the survey respondent did not vote (which may or may not be true).

For example, tabulations using this adjustment and reported by Michael McDonald of the University of Florida (http://www.electproject.org/home/voter-turnout/demographics) produce a Hispanic national voter turnout rate of 21.1% for 2014, nearly 6 percentage points below the Census Bureau’s official estimate of 27%. For non-Hispanic whites, the adjusted voter turnout rate is 40.8% in 2014, 5 percentage points lower than that reported by the Census Bureau. Similar differences are seen among non-Hispanic blacks (36.4% versus 40.6%).

No matter the method used, voter turnout rates in 2014 were among the lowest measured using the November Voting and Registration Supplement. Under both measures, voter turnout in 2014 for Hispanics dropped to a record low.

Next: References
← Prev Page
Page1Page2You are reading page3Page4Page5Page6Page7Page8
Next Page →