Democrats maintained a large edge among Latinos voting in Tuesday’s midterm elections, but in some states, Republican candidates won more than 40% of the Latino vote, according to a Pew Research Center analysis of National Election Pool exit poll data as reported by NBC News. Though Democrats comfortably won the Latino vote in nearly all states that had key Senate or gubernatorial races (and for which exit poll data is available), Republican candidates won many of those contests, and will take control of the U.S. Senate for the first time since 2007.

In congressional races nationally, Democrats won the Latino vote by a margin of 62% to 36%. This is comparable to the last midterm cycle four years ago when six-in-ten (60%) Latinos voted for a Democratic candidate, but down from 2012 when Democrats took 68% of the Latino vote.

The national exit poll shows Latinos made up an estimated 8% of voters this year.1 The share of Hispanics who voted remained unchanged from their estimated share in 2010 and 2006 despite the growing share of eligible voters (U.S. citizens ages 18 or older). This year, 11% of all eligible voters are Hispanic, up from 10.1% in 2010 and 8.6% in 2006 (Lopez, Krogstad, Patten and Gonzalez-Barrera, 2014).

The unchanged Hispanic share of voters suggests that the Hispanic voter turnout rate may not have changed much from 2010, when 31.2% of Hispanic eligible voters cast a vote.2 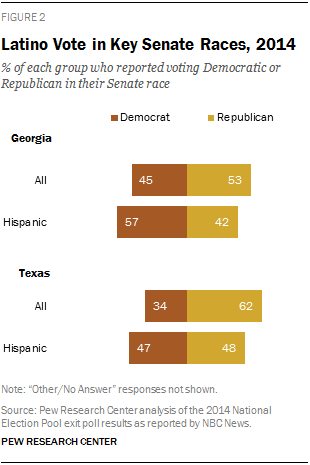 In several states where exit polling data for Hispanic voters is available, Democrats generally won the Hispanic vote in Senate and gubernatorial races. But in some states, Republicans did well among Hispanics, securing 40% or more of the vote.

This held true for two Senate races. In Georgia, Democrat Michelle Nunn won 57% of the Latino vote to Republican David Perdue’s 42%. But Perdue won the election. In Texas, the Latino vote was split between incumbent Republican John Cornyn (48%) and Democrat David Alameel (47%), as Cornyn won support from nearly half of Latinos. Exit poll data is not available for the Latino vote in Colorado or North Carolina, two key states in this year’s election.

In races for governor, the three states with the largest number of Latino voters had contests — California, Texas, and Florida. In Florida, Gov. Rick Scott won re-election despite losing the Hispanic vote to Democrat Charlie Crist by a margin of 38% to 58%, according to the state exit poll. That’s a marked decline from 2010, when 50% of Hispanics voted for Scott and from 2006, when the Latino vote was split 49%-49% between the two parties.

In the Texas race for governor, Democrat Wendy Davis won the Latino vote 55% to 44% but lost the election to Republican Greg Abbott.

In two other states with exit poll data for gubernatorial races, Latino voters gave their support to Democratic candidates. In New York, incumbent Democrat Andrew Cuomo defeated Republican Rob Astorino among Latino voters by a margin of 69% to 27%. And in Georgia, Republican Nathan Deal defeated Democrat Jason Carter in the race for governor. But Carter won a greater share of the Latino vote than Deal, by a margin of 53% to 47%, according to the state’s exit poll.

Several Hispanic candidates won elections to statewide offices and Congress this year. Two Hispanic Republicans who won races for governor in 2010—Susana Martinez in New Mexico and Brian Sandoval in Nevada— comfortably won re-election. Martinez won with 57% of the vote, and Sandoval 71% (exit poll data on the Hispanic vote in each state was not available).

Nationally, Democrats won majorities of the Hispanic vote across many demographic subgroups in congressional races. For example, Hispanic women favored Democrats over Republicans by a margin of 66% to 32%, compared with 57% to 41% among Hispanic men.

Asked about a variety of pressing national priorities, 49% of Latino voters identified the economy as the most important issue facing the country, followed by health care (24%) and illegal immigration (16%). That ranking is similar to that of all U.S. voters, among whom 45% named the economy, 25% heath care and 14% illegal immigration.

Exit poll results for this report were obtained from NBC News and CNN 2014 election websites on November 6, 2014 and are based on national and state exit poll surveys of voters as conducted by Edison Research for the National Election Pool. In addition to an analysis of the national Latino vote, the Latino vote in five states was examined. These states are California, Florida, Georgia, New York and Texas.

Latino Support for Democrats Falls, but Democratic Advantage Remains
Latino Voters and the 2014 Midterm Elections
The Latino Vote in the 2010 Elections
Latinos and the 2006 Mid-term Election
Latinos and the 2010 Elections: Strong Support for Democrats; Weak Voter Motivation
Social Media Use in 2021
What the data says about gun deaths in the U.S.
Defining generations: Where Millennials end and Generation Z begins
Key facts about U.S. immigration policies and Biden’s proposed changes
Views on Race in America