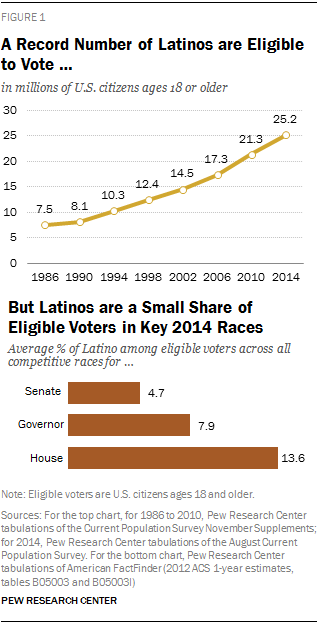 A record 25.2 million Latinos are eligible to vote in the 2014 midterm elections, making up, for the first time, 11% of all eligible voters nationwide. But despite a growing national presence, in many states with close Senate and gubernatorial races this year, Latinos make up a smaller share of eligible voters, according to an analysis of Census Bureau data by the Pew Research Center.1

Since 2010, the number of Hispanic eligible voters has increased by 3.9 million. Their share among eligible voters nationally is also on the rise, up from 10.1% in 2010 and 8.6% in 2006 (Lopez, 2011), reflecting the relatively faster growth of the Hispanic electorate compared with other groups. 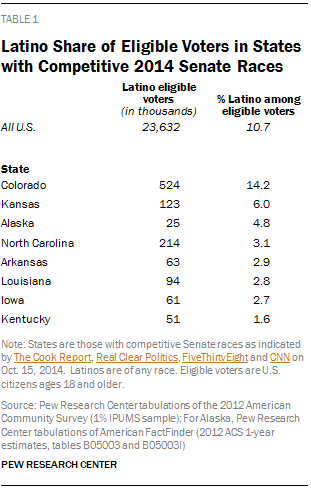 In the case of this year’s 14 competitive House races, the share of eligible voters that are Hispanic is, on average, 13.6%‎—slightly exceeding Hispanics’ 10.7% share nationwide.4 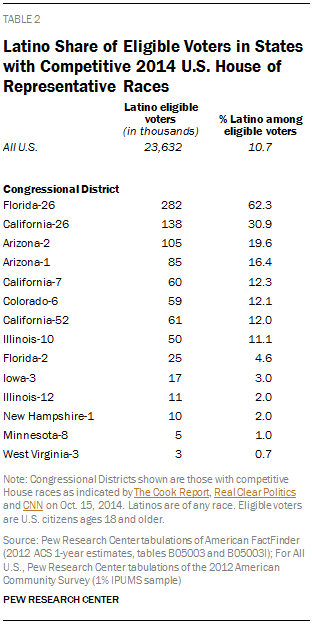 Republicans currently hold 233 seats in the U.S. House of Representatives and appear unlikely to lose control of the House. Among this year’s 14 toss-up races, most incumbents are Democrats.

In the 36 states with gubernatorial races this year, nine have close races.5 Just as with competitive U.S. Senate races, Hispanics on average account for a smaller share of eligible voters in these races than they do nationally. Overall, 7.9% of eligible voters in these states are Hispanic, compared with a 10.7% share nationally. Among these states, three have Hispanic eligible voter shares above 10% (Florida with 17.1%, Colorado with 14.2% and Connecticut with 10.3%) and three have voter shares below 5% (Wisconsin 3.2%, Michigan 2.9% and Maine 1.0%).

In each midterm election since 1974, the number of Latino voters reached a new record high, largely reflecting the community’s fast population growth.6 However, the share of those Latinos who actually vote on Election Day—the voter turnout rate—has lagged significantly behind other racial and ethnic groups. 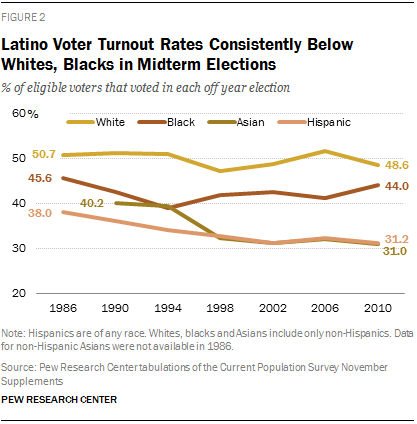 During the 2010 midterm election, a record 6.6 million Hispanics voted, representing a turnout rate of 31.2%. But more than twice as many Hispanics—14.7 million—could have voted but did not (Lopez, 2011). By comparison, voter turnout rates were higher among blacks (44%) and whites (48.6%).

Low voter participation rates among Hispanics are due to many factors. First, the relative youth of the Hispanic population may impact overall Hispanic voter turnout rates. Young people turn out at rates lower than that of older eligible voters. This is true among Hispanics (Lopez, 2011; Lopez and Gonzalez-Barrera, 2013) just as it is among other racial and ethnic groups (CIRCLE, 2013).

For Hispanics, however, young people are a larger share of eligible voters than they are among other groups. In 2014, 33% of Hispanic eligible voters are ages 18 to 29. By comparison, among white eligible voters, 18% are in that age group. And, among blacks, that share is 25%. Among Asians, 21% are between ages 18 and 29.

Registered Voter Population: Persons who say they are registered to vote.

Voter Population or Voter Turnout: Persons who say they voted.

Voter Turnout Rate: Share of the voting eligible population who say they voted.

Hispanic youth will also be the main driver of growth in the number of Hispanic eligible voters nationally in the coming decades. Currently, some 800,000 U.S. born Hispanics turn 18 each year, with one million or more expected to reach adulthood annually by 2024. And by 2030, the number of Hispanic eligible voters is projected to top more than 40 million (Taylor, Gonzalez-Barrera, Passel and Lopez, 2012).

Voters in several states this year are facing state ballot initiatives on issues such as gun control, marijuana legalization, abortion and the minimum wage. On some of these issues, national Latino public opinion differs from that of the general U.S. public, but on others, Latinos’ views are no different.

A measure to legalize marijuana for medicinal purposes is on the ballot in Florida, a state with the fifth-highest share (17.1%) of Hispanic eligible voters. Nationally, Hispanic registered voters are split on the question of marijuana legalization—about half (49%) say that marijuana should be made legal while a similar 48% share say it should not be made legal. By comparison, among U.S. registered voters, the balance tilts toward legalizing over not legalizing by a margin of 53% to 44% (Pew Research Center, 2014d).

Overall, Hispanics are less likely to say they have ever used marijuana than other Americans. One-third (33%) of Hispanics say this compared with 50% of whites and 49% of blacks (Pew Research Center, 2014b).

Measures that could restrict access to abortion services and certain birth control methods are on the ballot in Colorado, North Dakota and Tennessee. In Colorado, Hispanics make up 14.2% of eligible voters, compared with just 2% in Tennessee and 1.8% in North Dakota. On abortion, Hispanic registered voters nationally are split on the issue—48% say abortion should be legal in all or most cases, while 44% say it should be illegal in all or most cases. Among all registered voters, the balance is tilted the other way as a larger share thinks abortion should be legal than illegal (52% vs. 42%).8

At 54.1 million, Latinos are the nation’s largest minority group and growing fast (Brown, 2014). Latinos have also strongly supported Democratic presidential candidates in recent elections, giving President Barack Obama 71% of their vote in 2012 compared with 27% to Republican Mitt Romney (Lopez and Taylor, 2012). Latino registered voters also tend to affiliate with the Democratic Party. In 2012, 70% of Latino registered voters said they identified with or leaned toward the Democratic Party (Lopez and Gonzalez-Barrera, 2012).

This report explores electoral participation trends among Hispanics in recent midterm election cycles. It also provides a snapshot of the geography and demography of the Hispanic vote in 2014, with a special focus on states and Congressional districts with competitive races. Accompanying this report are state profiles of Hispanic eligible voters in 42 states and the District of Columbia, each based on data from the 2012 American Community Survey. Also accompanying this report are interactive maps and tables showing key characteristics of Latino voters in all 50 states and the District of Columbia, as well as in each of the nation’s 435 Congressional districts.

Latino eligible voters in the states:

The Demographics of Latino Eligible Voters

This report examines national Latino voter participation trends in U.S. midterm elections. It also examines the geographic distribution of Latino voters across the nation’s 435 congressional districts and across the 50 states and the District of Columbia, with a focus on places with close Congressional, Senate and gubernatorial elections this year. The report also examines national Latino attitudes about gun control, marijuana use, the minimum wage and abortion. All four issues are part of ballot initiatives in many states this year.

The data for this report are from four main sources. The first is the November Voting and Registration Supplement of the Current Population Survey (CPS). The CPS is a monthly survey of about 55,000 households conducted by the Census Bureau for the U.S. Bureau of Labor Statistics. The CPS is representative of the non-institutionalized population of the U.S. It does not include data on the voting behavior of enlisted military personnel and those who are institutionalized. The November Voting and Registration Supplement of the CPS is one of the richest sources of information available about the characteristics of voters. It is conducted after Election Day and relies on survey respondent self-reports of voting and voter registration. In addition to the November Voting and Registration Supplement to the Current Population Survey, this report also uses the August 2014 Current Population Survey to estimate current characteristics of the nation’s Latino eligible voters.

The second data source is the 2012 American Community Survey.10 The 2012 ACS provides detailed geographic, demographic and economic characteristics for Latino and non-Latino eligible voters and is the main source for the state-level analysis of this report and the accompanying state profiles of Latino eligible voters

“Voters” are those who say they voted in the Voting and Registration Supplement of the CPS.

“Voter turnout rate” is the share of eligible voters who say they voted.

“Competitive” or “close” races for House, Senate and Gubernatorial seats were identified by the Pew Research Center using ratings as of October 15 from The Cook Political Report, Real Clear Politics and CNN. For Senate races, FiveThirtyEight.com was also used. States or Congressional districts identified as a toss-up or competitive race by all available sources is identified as a close race in this report.

Next: Chapter 1: The Geography of Latino Voters
← Prev Page
You are reading page1Page2Page3Page4Page5Page6
Next Page →