More than 6.6 million Latinos voted in last year’s election—a record for a midterm—according to an analysis of new Census Bureau data by the Pew Hispanic Center, a project of the Pew Research Center. Latinos also were a larger share of the electorate in 2010 than in any previous midterm election, representing 6.9% of all voters, up from 5.8% in 2006.1

Rapid population growth has helped fuel Latinos’ increasing electoral participation. According to the Census Bureau, 50.5 million Hispanics were counted by the 2010 Census, up from 35.3 million in 2000 (Passel, Cohn and Lopez, 2011). Over the same decade, the number of Latino eligible voters—adults who are U.S. citizens—also increased, from 13.2 million in 2000 to 21.3 million in 2010.

This gap is driven by two demographic factors—youth and non-citizenship. More than one third of Latinos (34.9%) are younger than the voting age of 18, a share greater than that of any other group. And an additional 22.4% are of voting age, but are not U.S. citizens. As a result, the share of the Latino population eligible to vote is smaller than it is among any other group. Just 42.7% of the nation’s Latino population is eligible to vote, while more than three-in-four (77.7%) of whites2, two-thirds of blacks (67.2%) and more than half of Asians (52.8%) are eligible to vote. Even so, the number of Latino eligible voters will continue to grow in the coming decades as a steady stream of U.S. born Latinos becomes eligible to vote by turning 18—more than 600,000 did so annually between 2006 and 2010. 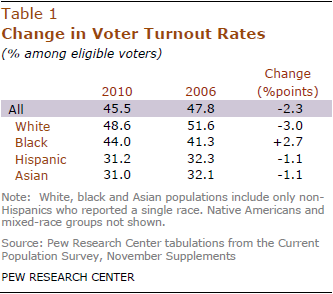 Yet, even among eligible voters, Latino participation rates have lagged behind that of other groups in recent elections. In 2010, 31.2% of Latino eligible voters say they voted, while nearly half (48.6%) of white eligible voters and 44.0% of black eligible voters said the same. This gap in participation—17.4 percentage points between Latinos and whites—has persisted in recent midterm election years, though it is down from a record 19.3 percentage points in 2006. A similar gap in voter turnout rates between Latinos and whites exists in presidential election years as well (Lopez and Taylor, 2009).

Just as with other populations, differences in voter turnout rates exist among Latino eligible voters. In 2010, Latino college graduates had the highest voter turnout rate (50.3%) among Latino eligible voters, while young Latinos ages 18 to 29 had the lowest (17.6%). Differences in participation rates also exist by country of origin. Nearly half (49.3%) of Cuban-origin Latinos voted in 2010 compared with 29.6% of Puerto Rican-origin Latinos and 28.7% of Mexican-origin Latinos. Similarly, a greater share of naturalized foreign-born Latinos than native-born Latinos voted—36.6% versus 29.2%.

Next: II. Dissecting the 2010 Electorate
← Prev Page
You are reading page1Page2Page3
Next Page →

The Internet and the 2010 Midterms

The Internet and Campaign 2010

Social media and politics in 2010 campaign