Immigrants: A Burden or a Source of Strength? 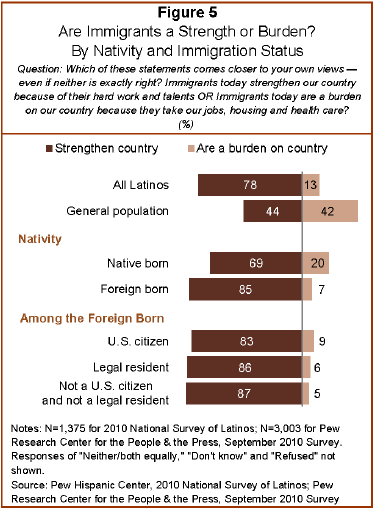 Nearly eight-in-ten Hispanics (78%) say immigrants to the United States strengthen the country because of their hard work and talents, while 13% believe these new arrivals are a burden because they take jobs, housing and health care.

This strong, positive assessment of the impact of immigrants on the U.S. differs sharply from the views of the general population. Overall, Americans are divided over whether immigrants are a source of strength (44%) for the nation or a burden (42%), according to a national survey conducted in August by the Pew Research Center for the People & the Press (2010b).

Native Born Less Likely to See Immigrants as a Benefit

While there is broad agreement among Hispanics about the contribution of immigrants to the nation, there are differences among some demographic groups.

Native-born Latinos are significantly less likely than the foreign born to see immigrants as a strength (69% versus 85%) and are almost three times as likely to say new arrivals are a burden (20% versus 7%). Among the foreign born, no significant differences are seen among naturalized citizens (83% say immigrants strengthen the country), resident aliens (86%) and Latinos who are not legal residents (87%).

About two-thirds (65%) of all Latinos who are English dominant say immigrants strengthen the country, a view they share with 77% of bilingual Hispanics and 87% of those who are Spanish dominant. Impact of Illegal Immigration on Hispanics in the U.S.

Hispanics are divided when asked to assess the effect of illegal or undocumented immigration on Hispanics already living in the United States. Three-in-ten (29%) believe the overall impact of unauthorized immigrants is positive. But similar proportions say that the impact of these immigrants is negative (31%) or that there has been no effect one way or the other (30%). 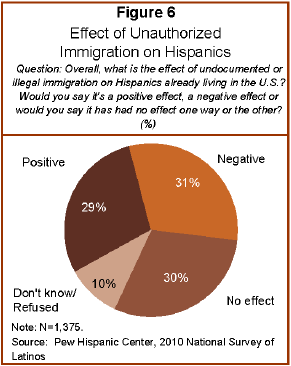 These results contrast sharply with the findings of a similar question asked three years ago (Pew Hispanic Center, 2007).3 Then, half of all Hispanics (50%) said the growing number of undocumented immigrants had a positive effect on the existing Hispanic community—fully 21 percentage points higher than the proportion who say that in the new survey.

At the same time, just 20% of respondents three years ago said the impact of the increasing number of unauthorized immigrants was negative. That is 11 percentage points lower than the share of Latinos who say the same today. Meanwhile, the proportion of Latinos who say unauthorized immigration has no effect increased by 10 percentage points—20% in 2007 versus 30% in 2010.

What explains these large changes in just three years? One reason might be the passage this year of Arizona’s Support Our Law Enforcement and Safe Neighborhoods Act—commonly known as Arizona SB 1070. (For more on Latinos and their views of Arizona SB 1070, see below.) 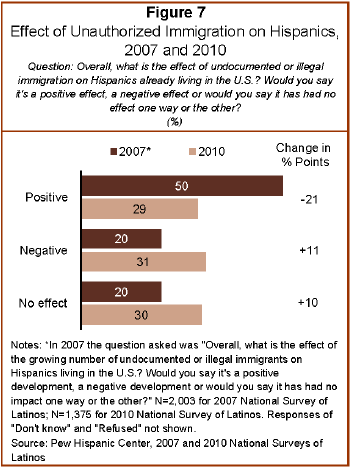 The law ignited a national controversy even before it was signed by Gov. Jan Brewer. Its key provision gives police the authority to check the immigration status of individuals during a “lawful stop, detention or arrest” who they suspect are in the country illegally. Critics of the law argue that it will lead to ethnic profiling of Latinos, and all immigrants, by police. Supporters say it is a necessary tool in the fight against illegal immigration. As shown below, the largest shift in views over the past three years occurred among the group at the center of the current political debate: foreign-born Latinos, including those who are living in this country but are neither U.S. citizens nor legal residents.

Foreign Born Shifted the Most

While the 2007-2010 shift away from generally positive views of illegal immigration has occurred among nearly all demographic groups of Hispanics, the biggest changes took place among the foreign born and those with limited English skills.

The change is even greater among Latinos with limited or no English skills. Slightly more than a third (36%) of respondents in the current survey who report they are Spanish dominant say the impact of undocumented immigration is positive, a 27 percentage-point decline from 2007. At the same time, among Latinos who are English dominant, the share who say the impact of illegal immigration is positive went from 35% in 2007 to 17% in 2010, an 18-point drop.

In the wake of the national controversy over Arizona SB 1070 and similar measures adopted or under consideration in other states, many Latinos believe that America has become a less tolerant place for immigrants. 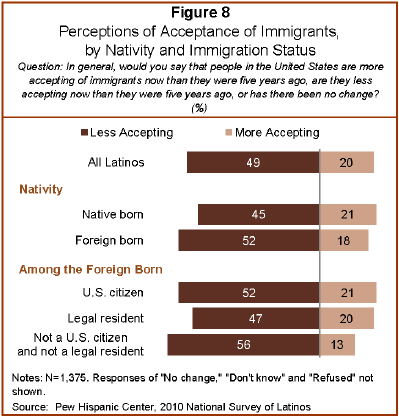 According to the survey, about half of all Latinos (49%) say that Americans are less accepting of immigrants now than they were five years ago, while 20% say they are more accepting and 28% see no change.

Is America Still the Land of Opportunity? 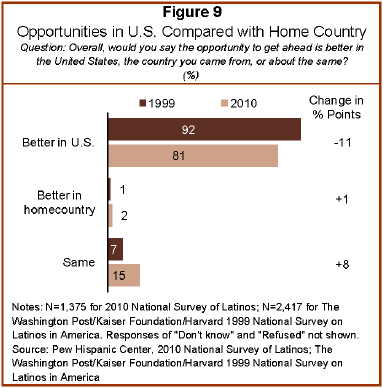 Despite the sense of diminished acceptance of immigrants, the overwhelming majority of Latinos still believe there are more opportunities for them to advance in the United States than in their home country or the home country of their ancestors. However, the proportion who say opportunity to get ahead is better in the U.S. has declined somewhat in the past decade, perhaps because of the recession or the increasingly tense social and political climate facing immigrants and Latinos. 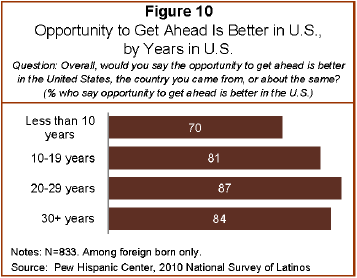 According to the survey, eight-in-ten (81%) Hispanics say the “opportunity to get ahead” is better in the United States than in their home country or the country of their ancestors, down from 92% who said the same in 1999 (Washington Post/Kaiser Family Foundation/Harvard University, 1999). Only 2% believe the opportunities are better back home, and one-in-seven say opportunities are equal (15%).

Nearly identical proportions of the native born (81%) and foreign born (82%) say there are more opportunities in this country, as do 84% of all foreign-born Latinos who are U.S. citizens, 83% who are legal residents and 79% who are in the United States but are neither U.S. citizens or legal residents.