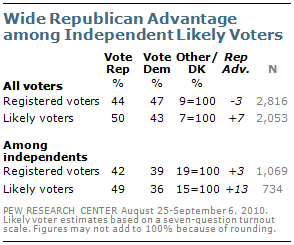 For the third national election in a row, independent voters may be poised to vote out the party in power. The Republican Party holds a significant edge in preferences for the upcoming congressional election among likely voters, in large part because political independents now favor Republican candidates by about as large a margin as they backed Barack Obama in 2008 and congressional Democratic candidates four years ago.

The survey by the Pew Research Center for the People & the Press was conducted Aug. 25-Sept. 6 among 2,816 registered voters, including 2,053 voters considered the most likely to vote on Nov. 2. The survey finds that 50% of likely voters say 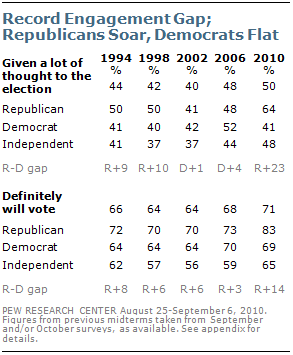 they will vote for the Republican in their district, while 43% favor the Democratic candidate.

Republican and Democratic voters overwhelmingly support their party’s candidates. The GOP’s advantage comes as a result of their 49% to 36% lead among independent and other non-partisan voters who are likely to vote in November.

The Republican Party’s overall lead is only evident when the sample is narrowed to likely voters. Among all registered voters, preferences are evenly divided. The race also is even among all independents and other non-partisans, but the GOP’s advantage swells to 13 points among independent likely voters. 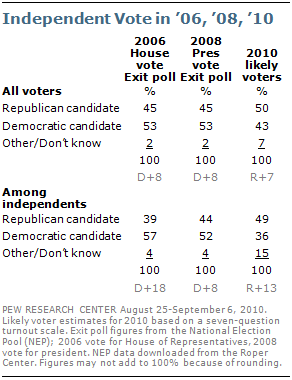 The propensity of independents to reject both parties in a relatively short period of time may in part reflect the fact that the ranks of independents have swelled in recent years with voters who have rejected party labels themselves. Underscoring the fluidity in party identification, many of today’s independents were themselves partisans not so long ago. More than half of independents say they have been a Democrat (23%), a Republican (22%), or both (9%), in the past five years.

Independents have mixed views of which party can do better on major issues – but are distrustful of both. When asked why they are independents, fully 64% cite as a major reason that “both parties care more about special interests than about average Americans.” And 53% point to a lack of trust in either party as a major reason they think of themselves as an independent in politics. 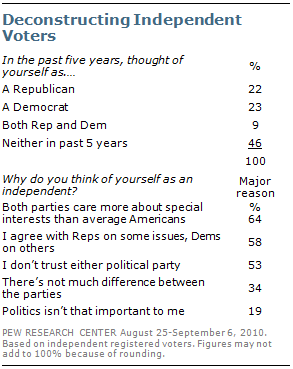 While the survey finds indications that independents will vote Republican this year, they do not have a strong allegiance to the GOP. Rather, they are motivated by highly negative feelings about the government’s performance and harsh judgments about the political status quo. Just 35% express approval of their own congressional representative, and they are as likely as Republicans to say that their own incumbent does not deserve reelection. But unlike Republicans and Democrats, a majority of independents say that which party controls Congress will not be a factor in their vote.

When asked which party comes closer to their views on major issues, independent voters prefer Republicans on foreign policy and economic issues but are more divided on social issues. More say the Republican Party comes closer to their views on foreign policy and national security (by 44% to 30%), but the GOP’s lead is more modest on economic issues (43% to 34%). And slightly more independents say the Democratic Party (39%) rather than the Republican Party (33%) better reflects their views on social issues such as gay marriage and abortion. In this regard, more than twice as many independent voters than Republican voters favor allowing gays and lesbians to marry legally (45% vs. 20%). 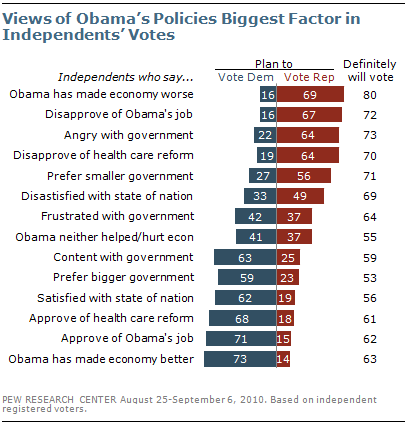 All things considered, support for the Republicans and political energy among independents is closely linked to disillusionment with Obama’s policies and the president himself. Fully 69% of independent voters who say Obama’s policies have made the economy worse favor the Republican candidate in their district – and 80% say they will definitely vote. Disapproval of the president’s job performance, anger at the federal government and opposition to the health care legislation also are closely associated with support for Republican candidates. Independents who express these views also are highly likely to vote.

While this study and other surveys measure the “independent vote,” there is a considerable degree of diversity among independents, which is not surprising given that most are relatively recent refugees from the two major parties. This survey identifies four groups of independent voters that are distinguished by their basic political beliefs – two groups that favor Republican candidates, one that favors Democratic and another that only leans Democratic: 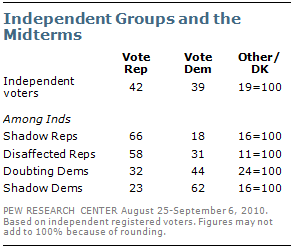 Disaffecteds (16% of independent voters) have been hard hit by the recession and are highly financially stressed. Anti-government and anti-politician, these quick to anger blue-collar voters have been mainstays of Pew Research typology groupings for decades. Disaffecteds divided their votes between Obama and McCain in 2008; today, 50% of Disaffecteds say Obama’s policies have made the economy worse and 60% disapprove of the health care bill enacted earlier this year.

How Independents Have Changed

Independents today are clearly more conservative than they were four years ago, particularly with respect to the role of government. Not only do more describe themselves as conservative, but more support smaller government, and there is more distrust and anger toward government generally.
While this ideological tide among independents benefits the GOP, there is a broader rejection of the party in power that also is influencing independent support for Republican candidates. Given their detachment from the parties and general skepticism about politics, independents’ views of president’s and the parties’ performance can and do change quickly. In this regard, the independent swing toward the GOP in 2010 has as much, if not more, to do with views of performance than with shifting ideological preferences.
Currently, independent voters rate the parties about evenly when it comes to which one could better improve 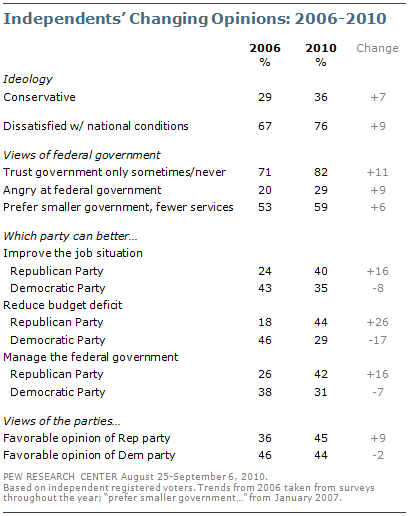 the job situation (40% Republican Party, 35% Democratic Party). Four years ago, the Democrats led by 19 points (43% to 24%) as the party better able to improve the job situation. Independents views of which party can better reduce the deficit have flipped since 2006 – the Republican Party is now favored by 15 points; in 2006, the Democrats led by 28 points.

Independents and the Tea Party 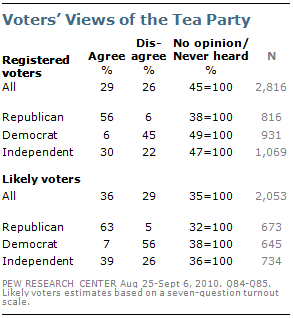 Next: Section 1: The Midterm Vote
← Prev Page
You are reading page1Page2Page3Page4Page5Page6
Next Page →

Independents Oppose Party in Power...Again
OverviewIndependent Voters: Diverse Groups with Divergent ViewsHow Independents Have ChangedIndependents and the Tea Party Other Important Findings
Section 1: The Midterm Vote Section 2: Independents in the 2010 Midterm Section 3: Trends in Party Affiliation Section 4: Independents Under the Microscope About the Survey