Partisan affiliation has shifted in small but important ways several times over the past two decades, with several politically consequential changes occurring the in past few years. After holding a 10-percentage point 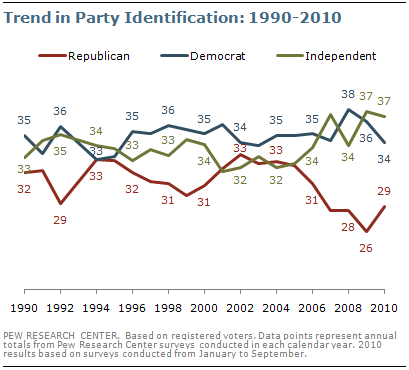 advantage in party identification among registered voters in 2008 and 2009, the Democratic Party now has only a five-point lead in 2010. Fewer voters identify as Democrats and more identify as Republicans.

Amidst these ups and down in affiliation with the two major parties, the number of independents and non-partisans now stands at 37%, one of the highest levels in the past 20 years of Pew Research Center polling. The proportion of independents has fluctuated in recent years, but the current number is sharply higher than it was several years ago (32% in 2002). 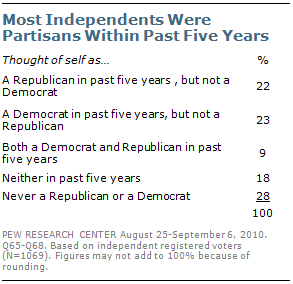 The recent changes in partisan identification serve as a reminder that affiliation with a party is an attitude, one which can and does change. Previous research has shown that few people switch immediately from Republican to Democratic identification or vice versa. Most of the movement is from independents who assume a party label or from partisans who no longer identify with their former party. 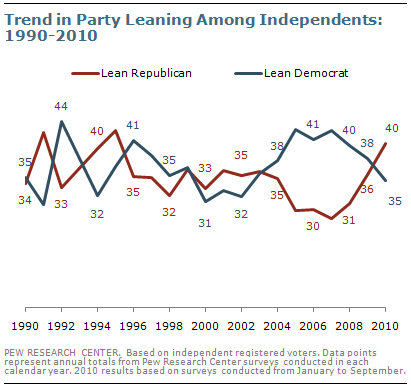 Just a year ago, 36% of independents leaned to the GOP and 38% leaned Democratic, while 26% did not state a preference for either party. Consequently, over the past year party leaning among independent voters has shifted from a two-point Democratic lead to a five-point Republican advantage. And the shift is even more dramatic from 2006 when Democrats enjoyed an 11-point lead in independent leaning.

The growth in the percentage of independents who lean Republican has been accompanied by an uptick in the proportion who describe their views as conservative. Currently, 36% of independents say they are conservative, up from 29% in 2006. Over the same period, the proportion of independent who are moderates declined from 46% to 43%, while the number describing themselves as liberal edged downward two points (from 18% to 16%). (For more on ideological shifts among the electorate, see pg.30). 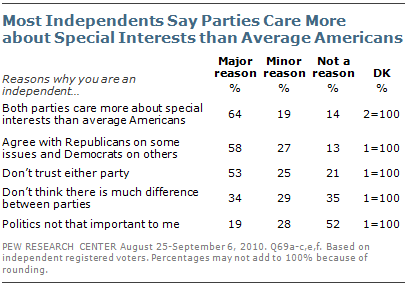 In response to a series of questions about why they are independent, majorities of non-partisan voters cite three different factors as major reasons for rejecting a party label. Nearly two-thirds (64%) say that both parties caring more about special interests than about average Americans is a major reason for their independent status. A smaller 53% majority says a major reason for being independent is that they don’t trust either political party.

Independents who say they previously identified as Republicans or Democrats have positive views of their former parties. Fully 79% of independent voters who thought of themselves as Republicans in the past five years lean to the GOP and the same percentage (79%) favors the Republican candidate in their district.

Similarly, former Democrats overwhelmingly lean Democratic (76%) and plan to vote for a Democrat in November (73%). And just as voters who affiliate with the Republican Party are more engaged in the election, the same is true among independents who used to belong to the GOP: 79% say they will definitely vote and 70% say they are giving a lot of thought to the election. That compares with just 59% and 36%, respectively among former Democrats.

The midterm preferences of independents who have not recently considered themselves a Democrat or a Republican are much more divided – 39% favor the GOP candidate and 36% back the Democratic candidate while 26% are undecided. There is a similar pattern in their partisan leaning; 38% lean to the Republican Party, 34% to the Democratic Party and 27% refuse to lean to either party. But the plurality of this group voted for Obama over McCain in 2008 (41% Obama, 27% McCain). Among the independents who have been consistently nonpartisan over the past five years, 43% have given a lot of thought to the election and 60% say they definitely will vote, about on par with former Democrats.

For the most part, former Republicans, former Democrats and voters who have not recently considered themselves partisans agree on the reasons why they are independents. For instance, large majorities in all three groups say both parties care more about special interests than about average Americans. But 61% of former Republicans say they do not trust either party, compared with 46% of former Democrats. About half (53%) of those who have not recently affiliated with a party say they do not trust either party. 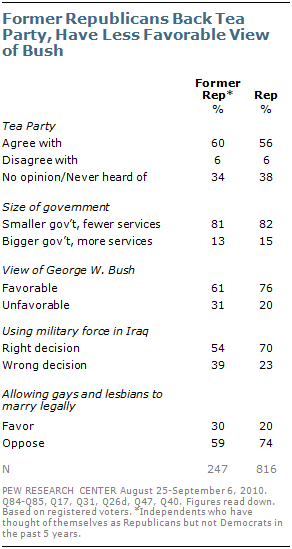 Former Republicans share many opinions with Republican partisans – particularly about Barack Obama and the size of government. But there are also key differences of opinion about George W. Bush, the Iraq war and social issues.

There are also differences over social issues. About six-in-ten (59%) former Republicans oppose allowing gays and lesbians to marry legally while 30% favor this. But Republicans oppose same-sex marriage by a 74% to 20% margin. And while at least three-fourths of former Republicans say the GOP comes closer to their views on economic issues (79%) and foreign policy and national security (76%), only 60% say the same about social issues such as same-sex marriage and abortion. 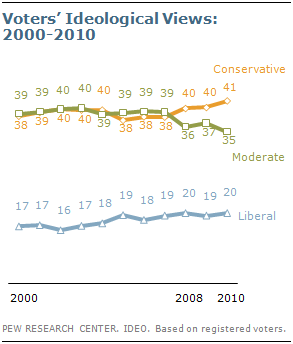 For most of the last decade the political ideology of American voters has been very stable. From 2000 to 2007, roughly four-in-ten voters described themselves as moderate and an equal share as conservative. About two-in-ten thought of themselves as liberal. In the last three years, however, the share identifying as conservative increased and the percentage identifying as moderate declined.

Among voters interviewed in 2010, 41% describe themselves as politically conservative. While conservative ideology is up 3 points from 2007 – the year Democrats assumed control of Congress – the percent who call themselves moderate is down four points (from 39% in 2007 to 35% in 2010). One in five (20%) say they are liberal, about the same percentage as in the past few years. 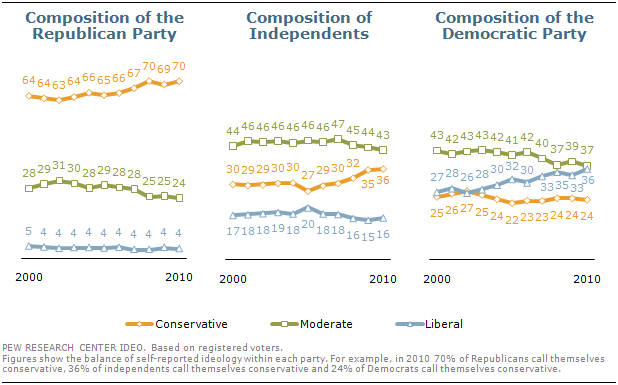 To be sure, not all of the growth in conservative ideology among independents is attributable to lapsed Republican identity. Republican Party affiliation increased three percentage points from 2009 to 2010 (26% to 29%), while independent identity remained stable, yet the percentage of independents calling themselves conservative edged slightly upward from 35% in 2009 to 36% in 2010. 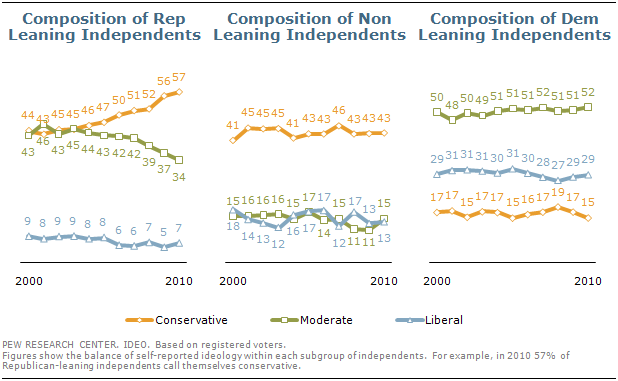 Next: Section 4: Independents Under the Microscope
← Prev Page
Page1Page2Page3You are reading page4Page5Page6
Next Page →