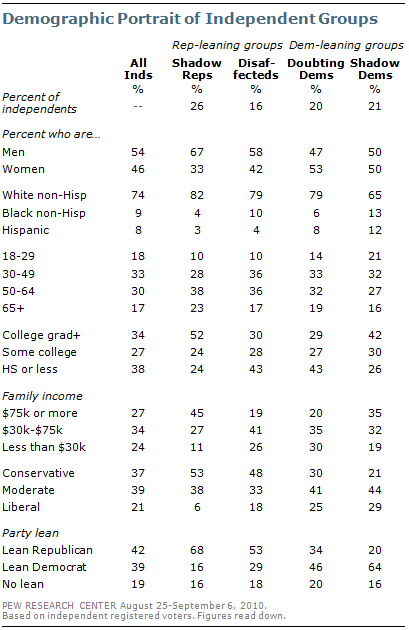 Independents are often described as a cohesive bloc of voters, whose views consistently fall midway between those of Republicans and Democrats. Yet a closer look at independents finds a substantial degree of diversity among these voters – demographic, ideological and in their attitudes and opinions.

Shadow Republicans (26% of independent voters) stand out for their strong anti-government views – 21% volunteer that they “never” trust the federal government. Yet they are not especially critical of the political system and are strongly pro-business. Shadow Republicans are largely comprised of white males; in fact, fully two-thirds (67%) of this group are men – a much higher percentage than in the other independent groups or among Republican voters (only about half – 49% – of whom are men). 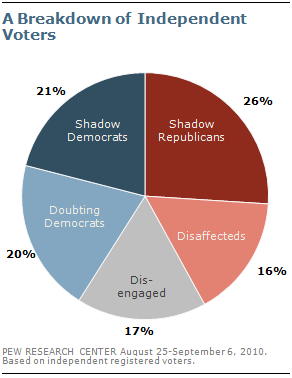 Disaffected independents have an extremely pessimistic view of their own personal finances –nearly all of them rate their finances as only fair (69%) or poor (26%). Like the Shadow Republicans and Republican voters, Disaffecteds have a highly negative view of government. But Disaffecteds also are critical of business, political parties and elected officials.

Doubting Democrats (20% of independent voters) are much more critical of government and the political system – including the Democratic Party – than are Shadow Democrats, the other group of Democratic-leaning independents. 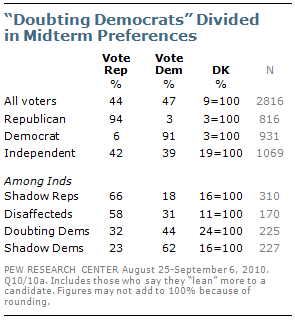 As their name implies, Doubting Democrats express mixed views of the Democratic Party; fewer than half (46%) say they lean Democratic, while 34% lean to the GOP. Just 29% approve of Barack Obama’s job performance and most (54%) say they disapprove of the health care legislation passed by Obama and Congress.

Independent Groups and the Midterms 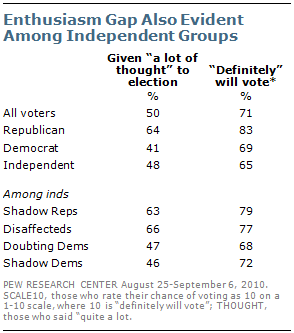 The “enthusiasm gap” among groups of independent voters parallels the gap among partisans: Shadow Republicans (63%) and Disaffecteds (66%) are far more likely to say they have given a lot of thought to the election than have either Shadow Democrats (46%) or Doubting Democrats (47%). 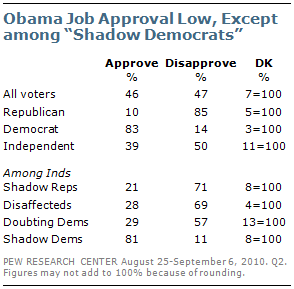 Notably, about twice as many Doubting Democrats disapprove of Obama’s job performance (57%) as approve (29%). Obama’s approval rating among this group is no higher than among the GOP-leaning Disaffecteds (28% approve), though somewhat more Disaffecteds disapprove (69%). 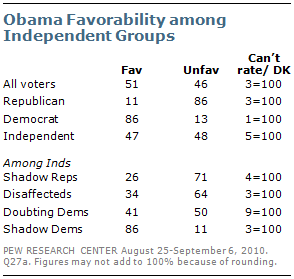 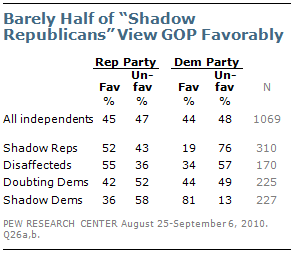 Views of the Tea Party 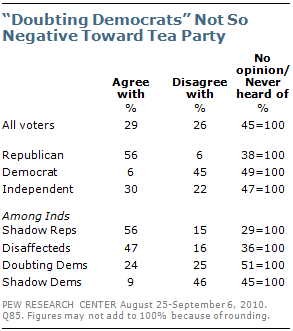 Views of Parties and Issues 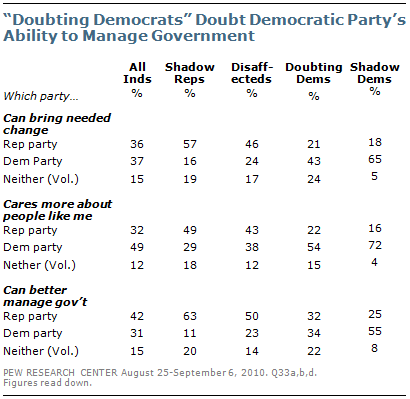 The conflicted views that many independents have about the political parties also are reflected in opinions about the parties’ traits and their handling of specific issues.

Disaffected independents see the Republican Party as better able than the Democratic Party to bring about the changes the country needs (by 46% to 24%) and as better able to manage the federal government (by 50% to 23%).

However, Disaffecteds are divided as to whether the Republican Party or Democratic Party is better described by the phrase “is more concerned with the needs of people like me.” Despite their Republican leanings, nearly as many Disaffecteds say the Democrats (38%) as Republicans (43%) better embodies this trait.

But Doubting Democrats live up to their name in assessing the ability of the two parties to manage the federal government: 34% say the Democratic Party could do better, while 32% say the GOP could do better and 22% volunteer neither party.

Shadow Democrats offer more uniformly positive views of the Democratic Party across all three traits. Similarly, despite their lukewarm overall view of the party, Shadow Republicans give more positive evaluations of the GOP than do Disaffecteds. 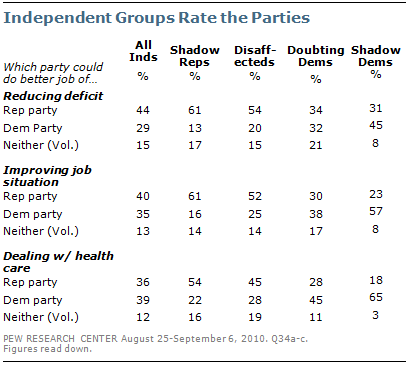 In terms of issues, independent voters say the Republican Party can do a better job than the Democratic Party of reducing the deficit (by 44% to 29%). On improving the job situation and dealing with health care, the two parties are rated about evenly among independents (40% Rep/35% Dem on job situation; 39% Dem/ 36% Rep on health care).

Doubting Democrats are divided in views of which party can better reduce the deficit and improve the job situation. Yet they favor the Democratic Party by 45% to 28% as better able than the Republicans to deal with health care.

Which Party Comes Closer to Your Views? 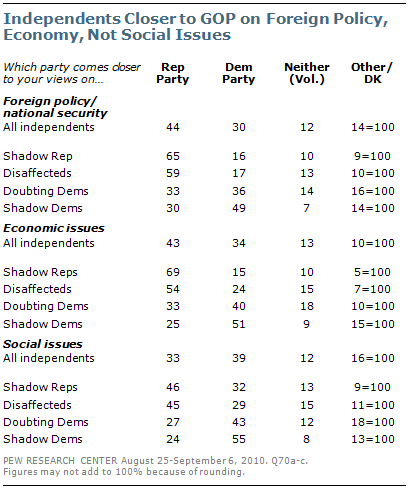 On social issues such as abortion and gay marriage, a plurality (43%) of Doubting Democrats see the Democratic Party as coming closer to their own opinions, compared with 27% who say the GOP better reflects their views. 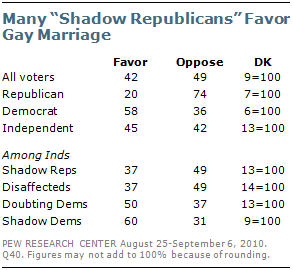 While Republican voters oppose same-sex marriage by greater than three-to-one (74% to 20%), there is far less opposition among GOP-leaning independent groups. About half of Shadow Republicans and Disaffecteds oppose gay marriage (49% each) while 37% of both groups favor it. 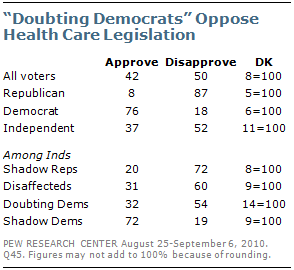 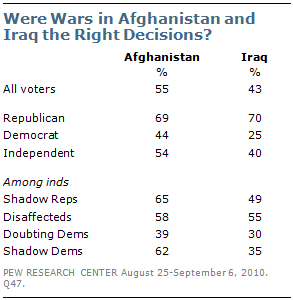 Reasons for Being an Independent 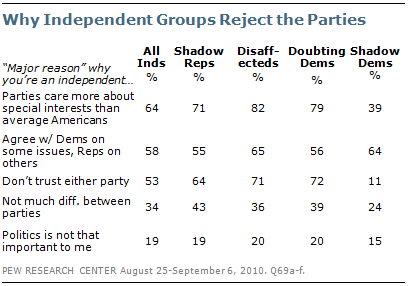 But Shadow Democrats take a far less negative view of the parties. About four-in-ten (39%) say the parties’ excessive concern for special interests is a main reason they are independents. And just 11% cite distrust of both parties as a main r
eason.

There is more agreement among the independent groups regarding other reasons for deciding not to affiliate with the major parties. For example, majorities across all four groups say that they agree with the Democratic Party on some issues and the GOP on others.

Independents Oppose Party in Power...Again Section 1: The Midterm Vote Section 2: Independents in the 2010 Midterm Section 3: Trends in Party Affiliation
Section 4: Independents Under the Microscope
Independent Groups and the MidtermsIndependent Groups and Obama“Shadow Reps” Lukewarm toward GOPViews of the Tea PartyViews of Parties and IssuesWhich Party Comes Closer to Your Views?Issues: Gay Marriage, Gun Control, Health CareWars in Iraq, AfghanistanReasons for Being an Independent
About the Survey