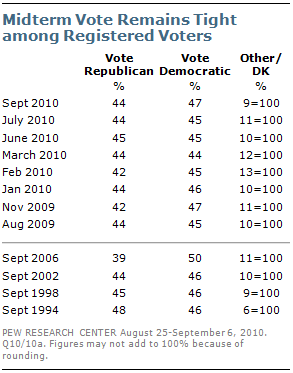 At this stage in the 2006 midterm, Democrats held an 11-point advantage in the generic congressional ballot (50% to 39%). At comparable points in each of the previous three midterms, preferences were almost evenly split. In September 1994, two months before Republicans would win control of Congress from the Democrats, 48% said they expected to vote for the Republican candidate in their district; 46% said they would vote for the Democrat.

While there is continuing parity in the race among registered voters, the Republican Party holds a seven-point lead among likely midterm voters: Half of them say they intend to vote for the Republican candidate in their congressional district, while 43% say they will cast ballots the Democrat. 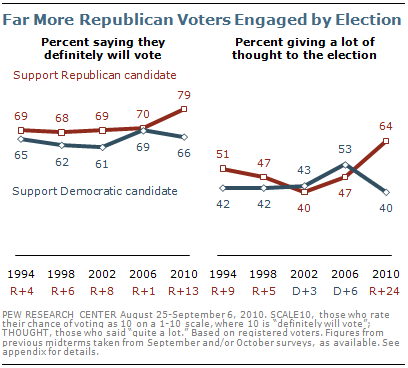 Two key indicators of likelihood to vote are measures of whether voters definitely will cast ballots this November (those who rate their chances of definitely voting at 10 on a scale of 1-10) and whether they have given “quite a lot of thought” to the election. 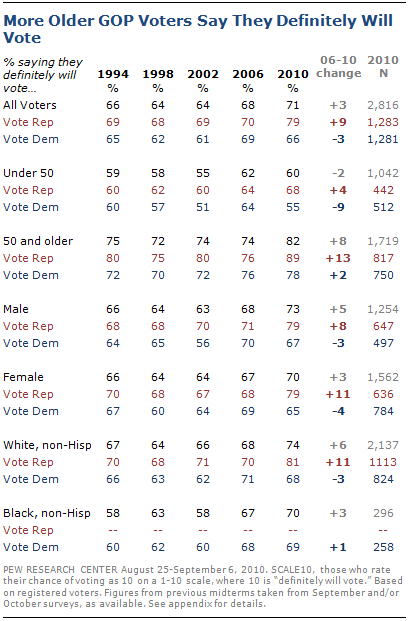 Most of the change has come among those who support Republicans. Nearly nine-in-ten (89%) Republican voters ages 50 and older say they definitely will vote, compared with 76% four years ago.

There has been virtually no change in certainty of voting among Democratic voters ages 50 and older. In 2006, 76% were sure they would cast a ballot; this year, 78% say they definitely will vote.

Six-in-ten voters younger than 50 say they definitely will vote, about the same as in 2006 (62%). Fewer voters in this age group who plan to vote for a Democrat express certainty about voting than did so in 2006 (55% today, 64% then), while there has been little change among supporters of Republican candidates (68% today, 64% then).

Fully 81% of non-Hispanic whites who favor the GOP say they definitely will vote, while 68% of whites who favor Democrats say the same. In 2006, there was little difference among white voters in their likelihood of voting by which party they favored. Black non-Hispanic voters, who overwhelmingly favor Democrats, are about as certain to vote this year as they were in 2006. 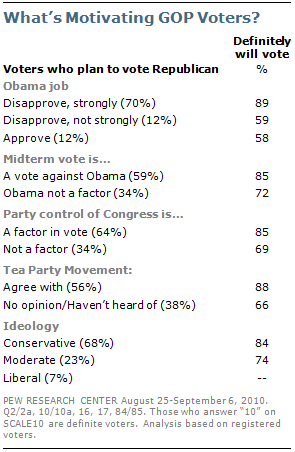 Overall, 70% of voters who favor the GOP candidate in their district say they strongly disapprove of the job Obama is doing as president. Among these voters, fully 89% say they will definitely vote. By contrast, only about six-in-ten of the much smaller group of Republican voters who disapprove of Obama’s performance, but not strongly, or approve of his job performance say they will definitely vote.

Other factors are motivating Republican voters this year: More than eight-in-ten of those who agree with the Tea Party movement (88%), say partisan control of Congress is a factor in their vote (85%), see their vote as a vote against Obama (85%), or are conservative (84%) say they will definitely vote. Smaller percentages of Republican voters who do not hold these views say they will definitely vote in November. 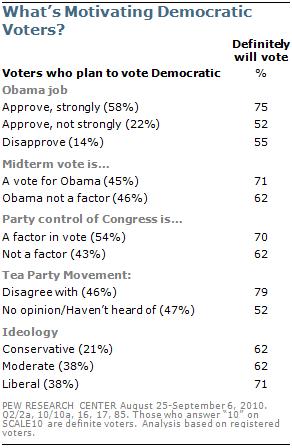 not strongly, or disapprove, say they will definitely vote.

Other factors motivating Democratic voters are disagreeing with the Tea Party movement (79% definitely vote), seeing their midterm vote as a vote for Obama (71%), having liberal views (71%) and saying partisan control of Congress is a factor (70%). But in each case, smaller percentages of Democratic voters who express these views say they will definitely vote compared with Republican voters who express the opposite opinions.

An Electorate Looking for Change

Just as at the start of the summer, voters are in an anti-incumbent mood. Only about half of registered voters (49%) say they want to see their own member of Congress reelected, while a third (33%) does not.

Similarly, just a third (33%) wants to see most lawmakers reelected while 56% say they would not like to see most incumbents reelected. On both measures, opinions have changed very over the course of the past year; and on both measures, the level of anti-incumbent sentiment is as high as it has been in midterms going back to 1994.

In the current survey, 64% of those who favor Democratic candidates say they would like to see their own representative reelected, compared with 39% of those planning to vote Republican. And while 51% of Democratic voters favor the reelection of most lawmakers, just 16% of Republican voters do so.

Currently, anti-incumbent sentiment is higher among Republican voters than it was among Democratic voters in September 2006, two months before the Democrats took control of Congress. At that time, 48% of voters who backed the Democratic candidate in their district said they wanted to see their own representative reelected (compared with 39% of those voting Republican this year). In September 2006, 25% of Democratic voters said they wanted to see most members reelected (16% of Republican voters say this today).

Next: Section 2: Independents in the 2010 Midterm
← Prev Page
Page1You are reading page2Page3Page4Page5Page6
Next Page →