Largely Muslim publics express little confidence in a number of key Muslim leaders. Hezbollah leader Hassan Nasrallah receives mostly negative ratings – except in the Palestinian territories and Jordan – while Palestinian Authority President Mahmoud Abbas fares even worse among the publics surveyed. Saudi King Abdullah is well-regarded among solid majorities in many of the predominantly Muslim countries – but some are beginning to lose confidence in the Saudi leader. Few in these countries have a positive opinion of Israeli Prime Minister Benjamin Netanyahu – Israel is the only nation where he receives a positive review.

Opinions in the Middle East of the leader of the Lebanese Shia military group Hezbollah are on balance mostly unfavorable. But in countries outside of the Middle East, many remain unfamiliar with him.

Only 37% of Lebanese say they have confidence in the militant leader, up five percentage points from 2007. However, this hides the increasing polarization on this issue between the country’s religious groups. Almost all of Lebanese Shia Muslims (97%) express confidence in Nasrallah, compared with 82% in 2007. In striking contrast, an equal percentage (97%) of Lebanese Sunni Muslims have little or no confidence in Nasrallah’s ability to do the right thing regarding world affairs – a slight jump from 89% in 2007. Among Christians, negative views of the Hezbollah leader remain widespread, but are not quite as pervasive as they were previously (76% in 2009 vs. 93% in 2007).

In only two nations – the Palestinian territories and Jordan – do majorities express confidence in Nasrallah’s foreign policy skills. Fully 56% in Jordan give a positive assessment of Nasrallah, largely unchanged from 2007. In the Palestinian territories, roughly two-thirds hold confidence in the Hezbollah leader (65%), but more expressed this sentiment in 2007 (79%). Moreover, respondents in the West Bank are much more likely to trust Nasrallah’s judgments in foreign affairs than are those in Hamas-controlled Gaza (71% vs. 49%). Elsewhere, substantial proportions in Pakistan (63%), Indonesia (48%) and Nigeria (28%) are unable to offer assessments of Nasrallah.

Palestinian President Mahmoud Abbas draws negative reactions throughout much of the Middle East. The lone exception is in the Palestinian territories, where more offer positive than negative ratings, although even among his fellow Palestinians, Abbas has lost support.

In Israel, confidence in President Abbas is rare (4%), and nearly all (94%) have little or no confidence in him to do the right thing in world affairs. Almost all of Israeli Jews (97%) lack confidence in the Palestinian Authority leader, but negative assessments are also widespread among Israeli Arabs (74%). Views are also decidedly negative in Lebanon (70% no confidence), with Shia Muslims (77%) and Christians (75%) somewhat more likely to hold Abbas in disfavor than Sunni Muslims (58%).

Since 2007, support for President Abbas has fallen in both Egypt and Jordan. In Egypt, confidence in Abbas declined by about half in just two years, from 67% to 33%. Similarly, substantially fewer Jordanians have confidence in the Palestinian Authority leader today (33%) than did so in 2007 (53%). 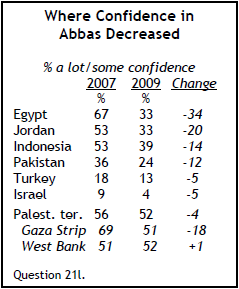 In the Palestinian territories, slightly more express confidence in President Abbas to do the right thing in foreign affairs than say the opposite (52% confidence vs. 47% no confidence). Positive ratings of Abbas in the West Bank have remained largely unchanged (52% in 2009 vs. 51% in 2007), but support for him in Hamas-controlled Gaza has slipped since 2007.

In Indonesia, Pakistan and Turkey, ratings of Abbas have dropped, but unfamiliarity with the leader is common in all three countries. In Nigeria, Abbas remains a highly polarizing figure. Nigerian Muslims view the Palestinian president positively by a two-to-one margin (56% confidence, 28% no confidence), while Nigerian Christians view him unfavorably by roughly a similar margin (51% no confidence, 22% confidence).

Negative views of Israeli Prime Minister Benjamin Netanyahu are nearly universal among predominantly Muslim publics in the Middle East. Netanyahu receives his only positive rating among his own people – a majority of Israelis say they have a lot or some confidence in him.

The Israeli prime minister inspires little confidence throughout the largely Muslim countries included in the survey. Almost all in Lebanon (98%), the Palestinian territories (97%), Jordan (95%) and Egypt (93%) doubt his ability to do the right thing when dealing with foreign policy issues. Roughly threequarters in Turkey (76%) and more than half in Indonesia (53%) express little or no confidence in Israel’s leader – although he remains an unknown figure for many in both of these countries.

In Nigeria, Netanyahu is a divisive figure between the two main religious groups – as a majority of Nigerian Christians (51%) hold a positive view of the prime minister but 56% of Nigerian Muslims say the opposite.

In Israel, a majority (55%) express confidence in Prime Minister Netanyahu’s ability to handle world affairs, while 44% lack confidence. Israeli Jews are much more likely than Israeli Arabs to have confidence in Netanyahu (63% vs. 11%), but Netanyahu does not escape from criticism among Israeli Jews – more than one-third (38%) have little or no confidence in him.

Majorities in six of the eight predominantly Muslim publics included in the study express confidence in Saudi King Abdullah to do the right thing in world affairs. However, while support for the Saudi leader remains high, confidence levels have slipped since 2007 – with the greatest decline found in Lebanon. Moreover, Abdullah provokes a sharp divergence of opinion between many of the religious groups in the countries surveyed.

Confidence in King Abdullah is highest in Jordan and Egypt – where positive views of the Saudi monarch are widespread. Roughly nine-in-ten (92%) Jordanians have faith in Abdullah’s ability to handle foreign affairs. In Egypt, 83% trust Abdullah to do the right thing in world affairs, down five percentage points since 2007.

Abdullah earns a favorable review among a majority of Lebanese (55%), but this marks a significant decline from 2007 when nearly eight-in-ten (79%) expressed confidence in him. This decrease is a result of shifting views among two of the three major religious groups in Lebanon – Shia Muslims and Christians. In 2007, 57% of Lebanese Shia expressed confidence in Abdullah, compared with only 8% in 2009. Similarly, the percentage of Christians who hold a positive view has decreased from 84% in 2007 to 57% in 2009. On the other hand, King Abdullah remains universally popular among Lebanese Sunni Muslims (94% in 2007 and 2009).

Abdullah receives praise in several countries outside of the Middle East – though significant percentages are unfamiliar with him. More than six-in-ten in Pakistan (64%) and Indonesia (61%) express confidence in his ability to handle world affairs. In Nigeria, more than half (55%) say they have confidence in the Saudi leader. However, on this issue there is a clear religious divide – Nigerian Muslims are more than twice as likely as Nigerian Christians to hold a positive view of Abdullah (78% vs. 33%). 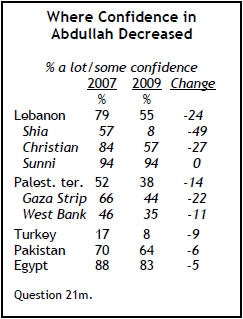 The Palestinian territories and Turkey are the only predominantly Muslim publics where negative feelings outweigh positive evaluations. Only 38% in the Palestinian territories trust Abdullah to do the right thing in global affairs, but many more (61%) remain doubtful of the Saudi leader. And since 2007, views of Abdullah have grown more negative – especially in the Gaza Strip where confidence ratings dropped from 66% in 2007 to 44% in 2009. In Turkey, only a handful (8%) say they have confidence in Abdullah – even fewer than in 2007 (17%). Similarly, few in Israel (11%) hold a favorable view of the Saudi King – but Israeli Arabs are much more likely than Israeli Jews to say this (32% vs. 7%). 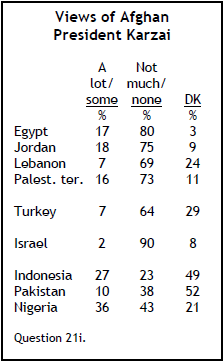 In the spring 2009 survey, conducted prior to the controversial August presidential election in Afghanistan, majorities in five of the eight predominantly Muslim countries surveyed express a lack of confidence in President Hamid Karzai.

Solid majorities in Egypt (80%), Jordan (75%), the Palestinian territories (73%), Lebanon (69%) and Turkey (64%) express little or no confidence in Karzai to make the right decisions when it comes to global affairs. Similarly, nine-in-ten in Israel express negative views of the Afghan president. In Pakistan, which borders Afghanistan, only 10% express a lot or some confidence in Karzai, and 38% have little or no confidence in the leader. But more than half in Pakistan (52%) are unable to offer an assessment. 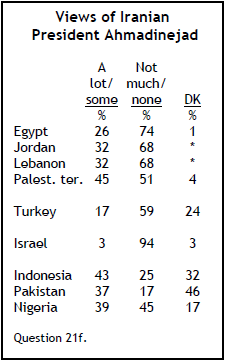 The survey, conducted primarily before Iran’s contentious June 12th presidential election, finds widespread negative views of President Ahmadinejad throughout much of the Middle East.5 More than two-thirds in Israel (94%), Egypt (74%), Jordan (68%) and Lebanon (68%) express little or no confidence in the Iranian leader’s ability to handle global affairs.

Outside of the Middle East, a solid majority of Turks (59%) lack confidence in the Iranian leader. However, Nigerians are somewhat split over Ahmadinejad’s foreign policy leadership (39% confidence vs. 45% no confidence). In Indonesia and Pakistan, positive views of Ahmadinejad outweigh negative evaluations, but large percentages in both countries are unable to provide an assessment.

Support for Osama bin Laden has declined in recent years among most Muslim publics.6 In Pakistan for example, in 2005, 51% said they had confidence in bin Laden; in 2009 only 18% agree.

The al Qaeda leader remains extremely unpopular among the Lebanese. Only a handful in Lebanon (2%) say they have a lot or some confidence in bin Laden to do the right thing in world affairs. Despite the many tensions among the country’s religious groups, Lebanese Christians (99%), Shia (98%) and Sunni Muslims (94%) uniformly voice little or no confidence in him. Turks and Israelis share the Lebanese dislike of bin Laden – only 3% in each country express support of him.

While majorities in Egypt (68%), Jordan (61%) and Indonesia (53%) express negative views of bin Laden, roughly one-quarter in these three countries hold a favorable view of the terrorist leader. 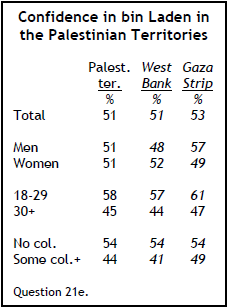 Ratings for bin Laden are the highest among Nigerian Muslims and in the Palestinian territories. In Nigeria, a majority of Muslims (54%) say they have a lot or some confidence in bin Laden’s ability to handle foreign affairs. Positive evaluations among Nigerian Muslims are common among men, women, the old and the young, but the less educated are more likely to hold this view than those with higher levels of education (58% vs. 45%).

In the Palestinian territories, a slim majority (51%) express confidence in bin Laden. Roughly equal percentages of Palestinians in the West Bank (51%) and the Gaza Strip (53%) say they have confidence in the al Qaeda leader – and positive attitudes are more common among young people and those with low levels of education. Young Palestinians under age 30 are more likely than those ages 30 and older to express a positive opinion of bin Laden. In the West Bank, the less educated are more likely than the well-educated to express a positive opinion of bin Laden (54% vs. 41%). However in Gaza, this education gap is less pronounced (54% no college vs. 49% some college or more).