Views of the Islamic extremist groups Hamas and Hezbollah are, with few exceptions, largely negative. In fact, a majority in only one country – Jordan – holds a favorable opinion of both the militant Palestinian Islamic organization Hamas and Shia Islamic group Hezbollah based in Lebanon. Certainly, many Palestinians and Egyptians also embrace Hamas and Hezbollah, but sentiment is far more mixed and negative than positive toward these groups.

The Israeli-Palestinian divide is strong and consistent, but so too is the intra-Palestinian divide: those living in the Gaza Strip are less inclined to embrace Hamas and Hezbollah, and are more inclined to believe there is a struggle between modernizers and fundamentalists taking place in their country.

A majority in only two countries – Jordan (56%) and Egypt (52%) – holds a favorable opinion of the militant Palestinian organization Hamas, which is classified as a terrorist organization by the U.S. government as well as by Canada, the European Union, Japan, Israel and Australia. Views of Hamas are negative or mixed elsewhere in the Muslim world.

In the Palestinian territories, opinions of Hamas are on balance negative. About half (52%) of Palestinians express a critical view of Hamas. However, those living in the Hamas controlled Gaza Strip are more likely to reject Hamas than their compatriots in the West Bank. Nearly six-in-ten (59%) Gazans hold an unfavorable view of Hamas, compared with 50% on the West Bank.

In Lebanon, more than two-thirds (68%) have a negative view, though opinions of the country’s two main Muslim communities are polarized. Although Hamas is a predominantly Sunni organization, it is embraced by an overwhelming majority (91%) of Lebanese Shia and rejected by an equally large percentage (97%) of Lebanese Sunnis. It is equally unpopular among Lebanese Christians (88% unfavorable).

Hamas is less well-known outside of the Middle East. Roughly six-in-ten in Pakistan (62%), four-in-ten in Indonesia (40%), and 28% of Nigerians do not offer an opinion about this Palestinian group. Of those who offer an opinion in Indonesia, views are evenly divided; 31% express a favorable opinion of Hamas, while 28% voice a negative view. Pakistanis who voice an opinion more often tend to express a negative (24%) than a positive (14%) view of Hamas. Nigerian views are divided along religious lines: A majority of Nigerian Muslims (58%) hold a positive opinion of Hamas, while 53% of Nigerian Christians hold an unfavorable view.

Views of Hamas have remained unchanged since 2008 in four (Jordan, Nigeria, Pakistan and Turkey) of the
seven countries for which there is a trend. Elsewhere, positive views of Hamas have increased. More Egyptians hold a positive view of Hamas in 2009 (52%) than the previous year (42%). Similarly, in Indonesia, 31% currently express a favorable rating of Hamas, while 23% did so the previous year.

In Lebanon, positive views have increased slightly overall; 25% of Lebanese held a favorable view of Hamas in 2008, while 30% currently do. However, the divide between Sunni and Shia has widened: Lebanese Sunnis are somewhat less likely now to hold favorable views of Hamas while Lebanese Shia are far more likely to express positive opinions than they were the previous year.

By contrast, since 2007 positive views of Hamas have decreased substantially in the Palestinian territories, particularly among those in the West Bank. Fewer Palestinians overall have a favorable view of Hamas in 2009 (44%) than did in 2007 (62%). Similarly, support for Hamas was quite pervasive in the West Bank in spring 2007 (70% favorable) but is now less common (47% favorable). Support remains still lower in the Gaza Strip, where Hamas now holds control, having declined from 45% in 2007 to 37% in 2009. 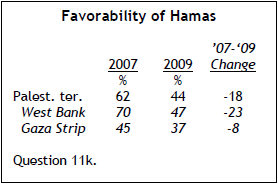 Just as with views of Hamas, Muslim-majority publics hold views of Hezbollah that are, on balance, more negative or mixed than positive.

Overall, most Lebanese take a dim view of Hezbollah, the Islamic Shia political and military organization based in Lebanon that is classified as a terrorist organization by the U.S. A solid majority (64%) of Lebanese say they have an unfavorable view of this organization. As in the past, Lebanese opinions are deeply divided along religious lines. Almost unanimously (97%), the country’s Shia community holds a favorable view of Hezbollah. By contrast, just as many among Lebanon’s Sunni community hold the opposite opinion (98%
unfavorable). Similarly, Lebanese Christians largely hold negative views of Hezbollah (80% unfavorable).

Israeli and Turkish public opinion is unified in its dislike of Hezbollah. Overall, more than nine-in-ten (92%) in Israel have an unfavorable view of the organization, including half of Israeli Arabs. Similarly, nearly three-quarters (73%) of Turks hold a negative view of Hezbollah.

In three of the Muslim-majority publics surveyed, positive views of Hezbollah are more common. Just over six-in-ten (61%) in the Palestinian territories embrace Hezbollah; as in the case of Hamas, far more in the West Bank (69%) than in the Gaza Strip (44%) hold such views. Consistent with past findings, a slim majority (51%) of Jordanians express a positive opinion of Hezbollah. More than four-in-ten (43%) in Egypt also offer a favorable view, although 57% express an unfavorable view.

Indonesians are equally likely to embrace (27% favorable) as reject (30% unfavorable) Hezbollah, though, as in the other predominantly Muslim countries surveyed in Asia and Africa, a substantial percentage (43%) of Indonesians do not offer an opinion. In Pakistan, six-in-ten (60%) say they do not know when asked about their opinion of Hezbollah.

Views of Hezbollah largely remained steady between 2008 and 2009. In four of the seven countries for which there are trend data from 2008, views of Hezbollah have remained unchanged, including in Lebanon. Elsewhere, change in views has been slight or moderate. In Egypt and Pakistan, favorability ratings have deteriorated somewhat. A majority (54%) of Egyptians embraced Hezbollah in 2008; 43% do so in spring 2009. In Pakistan, 24% held a positive view of this Lebanon-based Islamic group in 2008, while 17% do so in the 2009 survey.

Most Muslims surveyed believe the sectarian tensions that have plagued Iraq in recent years are not limited to that country. Among Muslims in seven of the nine countries where the question was asked, the balance of opinion is that tensions between Sunni and Shia are a growing problem in the Muslim world more generally.

In Lebanon, a country which itself has experienced ongoing sectarian tensions, this opinion is almost universally shared by Muslims: 99% of Sunni Muslims and 91% of Shia say the divide between their communities is a more general problem. Most Palestinian Muslims agree; 73% view the Sunni-Shia sectarian divide as one that reaches beyond Iraq, although, slightly more Gazans (81%) hold this view than Palestinians in the West Bank (70%). Similarly, roughly seven-in-ten (69%) Pakistani Muslims view the Sunni-Shia conflict as extending outside of Iraq.

Majorities of Muslims in Egypt (59%), Jordan (55%) and Turkey (52%) also see this as a problem that reaches beyond Iraq. Fewer hold this view in Indonesia (25%). Israeli Muslims are divided; roughly equal proportions say the Sunni-Shia divide is limited to Iraq (38%) and that it is a more general problem (42%).

A Struggle Between Modernizers and Fundamentalists 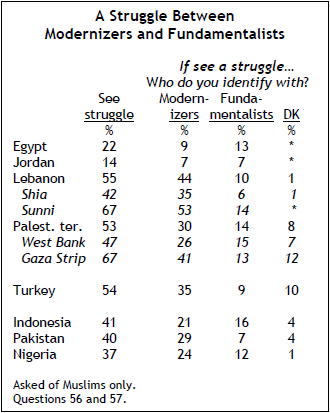 Many Muslims see a struggle in their country between groups that want to modernize the nation and Islamic fundamentalists. In three of the eight countries where this question was asked, more than half say such a struggle is taking place. Overwhelmingly, Muslims who see a struggle tend to side with the modernizers.

The belief that a struggle exists between modernizers and fundamentalists is most widespread in Lebanon. A solid majority (55%) of Lebanese Muslims see a struggle in their country. This view is much more common among Lebanese Sunnis (67%) than Shia (42%). But among both Sunnis and Shia, those who see such a struggle lopsidedly side with modernizers.

The belief that a struggle is occurring is equally widespread in Turkey, where tensions between elements of the country’s secular establishment and the ruling moderate Islamist Justice and Development Party (AKP) continue. Just over half (54%) believe a clash between moderates and fundamentalists is taking place in Turkey. Most Turks who believe a struggle exists identify with modernizers.

Overall, a slim majority (53%) of Palestinians also feel a struggle exists between those who seek to modernize and a more fundamentalist element. However, more Palestinians in the Hamas-controlled, Gaza Strip (67%) hold this view than do those in the West Bank (47%).

Four-in-ten Pakistani Muslims see a struggle taking place in their country though an equal number do not offer an opinion (38%). Indonesians are divided; four-in-ten (41%) feel a struggle exists while just as many disagree (40%). Similarly, in Nigeria, roughly four-in-ten (37%) say a conflict exists while about half (51%) reject that idea. 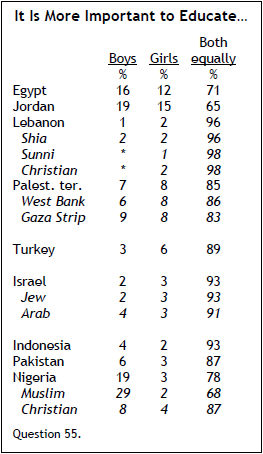 Egalitarian views about education are common in the predominantly Muslim countries surveyed. More than eight-in-ten in Lebanon (96%), Indonesia (93%), the Palestinian territories (85%), Turkey (89%) and Pakistan (87%) say that it is equally important to educate girls as it is to educate boys.

Overall opinion in Nigeria is roughly as egalitarian; (78%) agree that it is just as important to educate girls as it is to educate boys. Still, nearly one-in-five Nigerians (19%) consider educating boys more important. Also, more Nigerian Christians (87%) advocate equal education of the genders than do Nigerian Muslims (68%). In fact, roughly three-in-ten Muslims in Nigeria (29%) consider it more important to educate boys than girls.

About seven-in-ten Egyptians (71%) see education as equally important for boys and girls. While 16% of Egyptians consider it more important to educate boys than girls, a comparable percentage (12%) thinks educating girls is more important.

Egalitarian views are somewhat more widespread than in 2007 in Pakistan (+13 percentage points), the Palestinian territories (+11 points), and Israel (+9 points). Palestinians in the Gaza Strip are now much more likely to favor equal education for girls and boys than just two years ago (+28 points). Views about education among Palestinians in the West Bank have remained relatively steady; 86% currently believe that it is equally important to educate boys as girls where 82% held this view in 2007.

In Jordan, the opinion that it is more important for boys to be educated is considerably more common among men. Roughly one-quarter of Jordanian men (24%) share that view, compared with 15% of women. In the other countries surveyed in the Muslim world and Israel, gender does not appear to play a role in views of the importance of educating girls and boys.