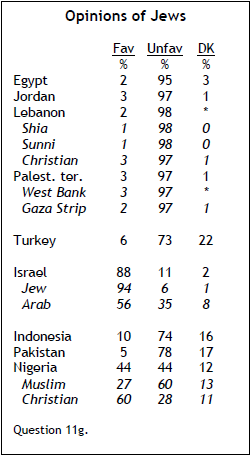 In the predominantly Muslim nations surveyed, views of Jews are largely unfavorable. Nearly all in Jordan (97%), the Palestinian territories (97%) and Egypt (95%) hold an unfavorable view. Similarly, 98% of Lebanese express an unfavorable opinion of Jews, including 98% among both Sunni and Shia Muslims, as well as 97% of Lebanese Christians. By contrast, only 35% of Israeli Arabs express a negative opinion of Jews, while 56% voice a favorable opinion.

Negative views of Jews are also widespread in the predominantly Muslim countries surveyed in Asia: More than seven-in-ten in Pakistan (78%) and Indonesia (74%) express unfavorable opinions. A majority in Turkey (73%) also hold a critical view.

Among Nigerians, overall views are split (44% favorable, 44% unfavorable), but opinions divide sharply along religious lines. Fully 60% of Nigerian Muslims have an unfavorable view of Jews, compared with only 28% of Christians. 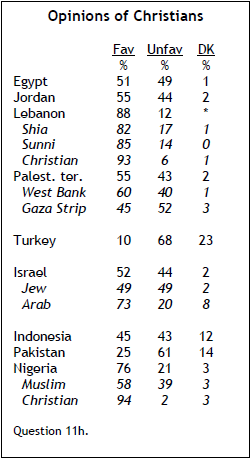 Among the Middle Eastern nations surveyed, negativity toward Christians is especially common in Egypt, where opinions are divided: 49% hold an unfavorable opinion and 51% express a favorable view.

By contrast, Lebanese opinion is relatively uniform. Few overall (12%) or among the different religious groups – Shia (17%), Sunni (14%) and Christian (6%) – express a dim view of Christians.

Muslim Publics Share Concerns about Extremist Groups
Muslim Publics Divided on Hamas and Hezbollah
Concerns about Islamic Extremism on the Rise in Middle East
Arab Spring Fails to Improve U.S. Image
Before Israel’s Invasion, Hamas Popularity Was Waning Among Its Neighbors -- Even in Gaza Itself