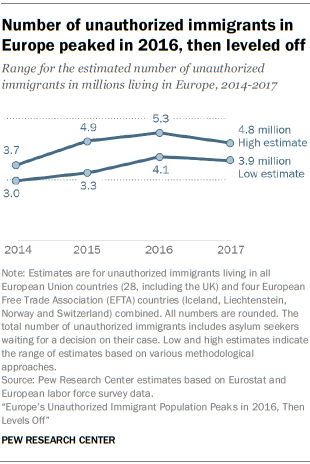 The number of unauthorized immigrants living in Europe increased between 2014 and 2016, then leveled off to an estimated 3.9 million to 4.8 million in 2017, according to new estimates from Pew Research Center.

These immigrants lived in the 32 countries of the European Union (EU) and European Free Trade Association (EFTA), but about half lived in just two countries – Germany and the United Kingdom. Europe’s unauthorized immigrants are diverse in their origins, coming from many nations outside of the region. They are also largely recent arrivals to Europe, with about half having arrived in the past five years.

Europe is one of the world’s top destinations for international migrants. In recent years, their population has grown as high numbers of immigrants have entered Europe, including some seeking asylum.

Here are five facts about the unauthorized immigrant population in Europe.

Who counts as an unauthorized immigrant is subject to debate, in part because immigration policies vary by country. A broad definition includes anyone who entered the country without authorization and has yet to receive permanent residency. Narrower definitions exclude those with legal protection from deportation, even if the protection is temporary.

When deciding who counts as an unauthorized immigrant, Pew Research Center takes into account whether a person entered a country legally and their potential path to permanent residency. For example, those with a deferred deportation order may have a legal right of residence and be allowed to work, but they are still included as unauthorized immigrants since most entered a European country without permission and their long-term future in the country is uncertain. Similarly, asylum seekers with a pending decision on their asylum application are counted as unauthorized immigrants because many entered Europe without authorization and asylum rejection rates are high. 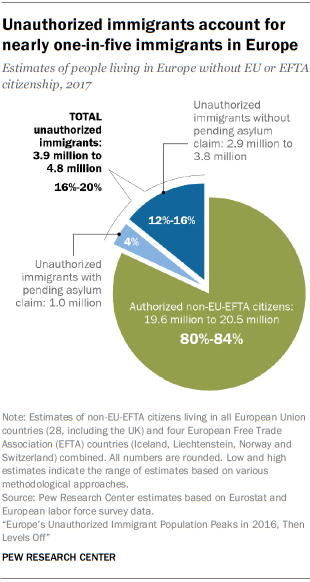 2Asylum seekers waiting for a decision on their application accounted for nearly one-quarter of Europe’s unauthorized immigrant population in 2017. This group totaled nearly 1 million at the end of 2017, up from about 600,000 in 2014. Driving this increase were the roughly 1.3 million asylum applications filed in 2015, when a surge in asylum seekers arrived in Europe. Asylum seekers have legal standing in Europe while they await a decision on their case, but have an uncertain legal position going forward. Most asylum seekers entered Europe without permission, and in recent years the majority have had their asylum applications rejected. Not counting asylum seekers, the estimated number of unauthorized immigrants in Europe was 2.9 million to 3.8 million in 2017, up from 2.4 million to 3.2 million in 2014. 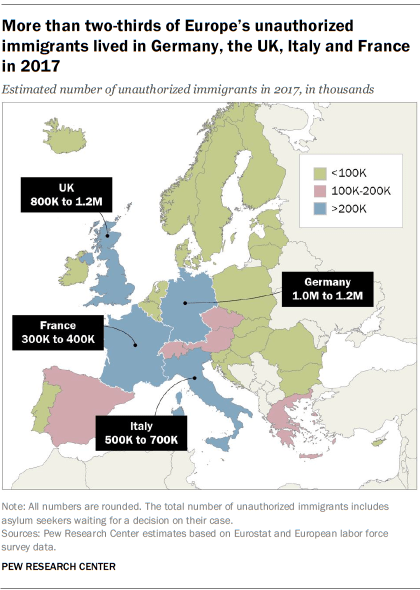 Q&A and video: How we estimated the number of unauthorized immigrants

5About half of Europe’s unauthorized immigrants have arrived in the region recently, and most are young. In 2017, more than half of Europe’s unauthorized immigrants (56%) had arrived in the past five years, while 27% had arrived 10 years ago or more. About two-thirds were less than 35 years old (65%), and about half were male (54%).

To learn more: Read our report on Europe’s unauthorized immigrant population. For more information on how estimates were calculated, see the Methodology.