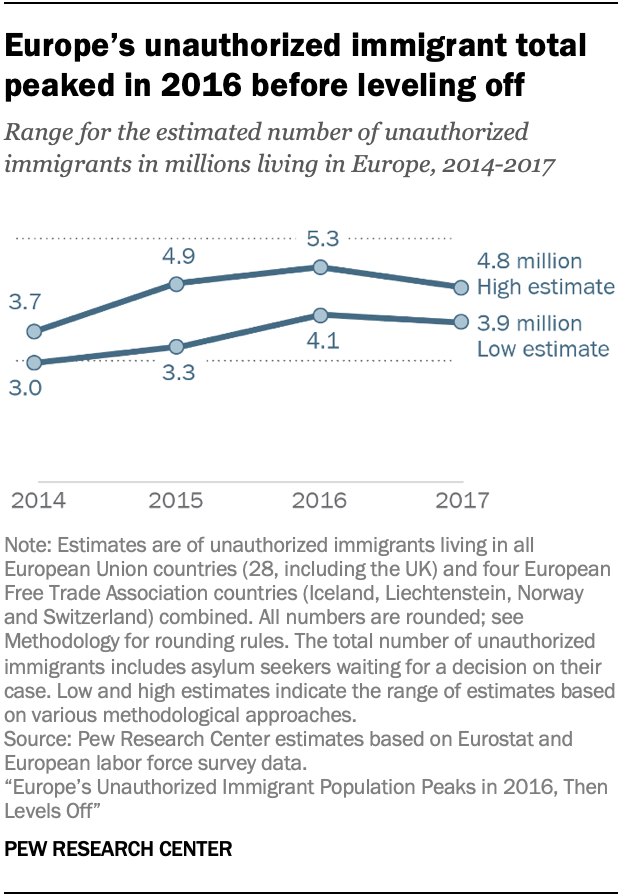 Europe has experienced a high level of immigration in recent years, driving debate about how countries should deal with immigrants when it comes to social services, security issues, deportation policies and integration efforts. Among these recently arrived immigrants are many who live in Europe without authorization. Coupled with unauthorized immigrants who were already in Europe, their numbers reach into the millions, though together they make up a small share of Europe’s total population.

A new Pew Research Center analysis based on European data sources estimates that at least 3.9 million unauthorized immigrants – and possibly as many as 4.8 million – lived in Europe in 2017. The total is up from 2014, when 3.0 million to 3.7 million unauthorized migrants lived in Europe, but is little changed from a recent peak of 4.1 million to 5.3 million in 2016.1

Overall, unauthorized immigrants accounted for less than 1% of Europe’s total population of more than 500 million people living in the 28 European Union member states, including the United Kingdom, and four European Free Trade Association (EFTA) countries (Iceland, Liechtenstein, Norway and Switzerland). And among the roughly 24 million noncitizens of EU-EFTA countries living in Europe, fewer than one-fifth were unauthorized immigrants in 2017.

The recent rise in Europe’s long-standing unauthorized immigrant population from nations outside of EU-EFTA countries is largely due to a surge of asylum seekers who mostly arrived in 2015, when more than 1.3 million people applied for asylum in EU-EFTA countries. Many from that wave have been approved to remain in Europe. Many others, however, have had their applications rejected. Some have appealed those denials. Still others whose applications were rejected or withdrawn continue to live in Europe. 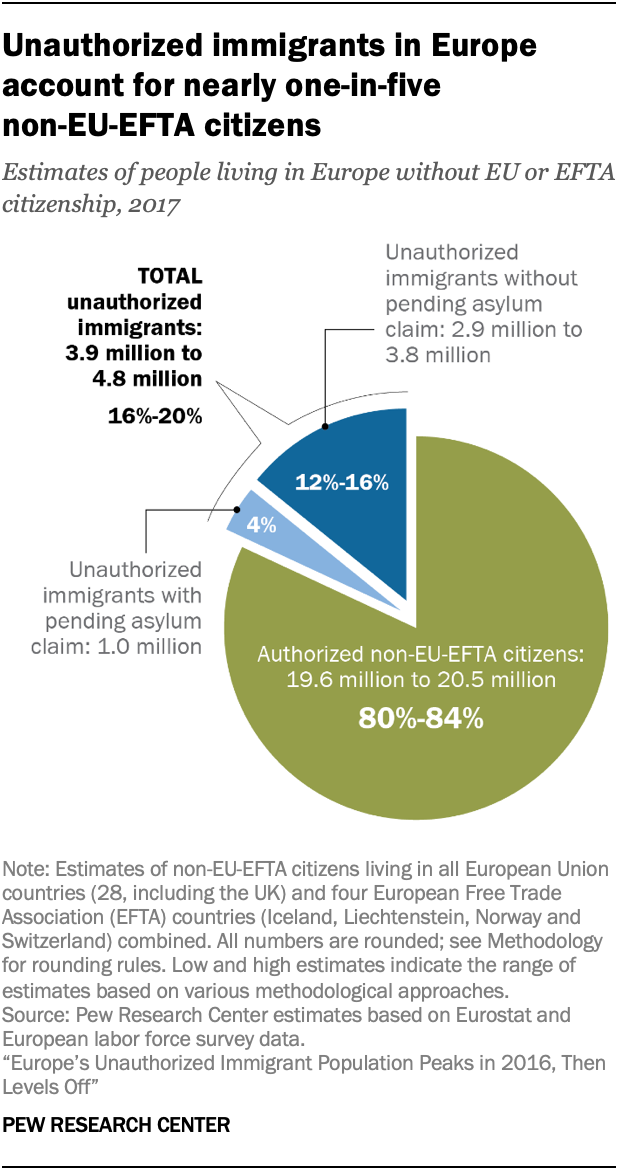 Meanwhile, many asylum seekers in Europe are still awaiting a decision on their pending application, a group that is part of our estimates, and accounted for nearly a quarter (20% to 24%) of Europe’s unauthorized immigrant population in 2017. Although asylum seekers waiting for a decision have a temporary legal standing, their future in Europe is uncertain. Most entered their country of residence without permission, and the majority of applicants are now seeing their applications rejected. Consequently, many have been or could be subject to deportation orders in the future.

Who’s counted as an unauthorized immigrant?

Many different immigrant groups can be counted as unauthorized immigrants, as there is no universal definition and the inclusion of some groups over others is a point of debate. A broad definition could include anyone who entered the country without authorization and has yet to procure permanent residency. This definition could include those with subsidiary protection status, a group that does not qualify for refugee status but receives humanitarian protection that can be renewed for one or two years at a time. Those with this status can sometimes sponsor family members and after several years apply for permanent residency.

Pew Research Center has selected an approach that considers a combination of authorized entry, legal certainty and likely permanency. In the U.S., the Center considers those with deportation relief (for example, Deferred Action for Childhood Arrivals or Temporary Protected Status) as well as asylum seekers waiting on their cases as unauthorized immigrants. Although these groups are authorized to work, many entered without permission and their legal future in the U.S. is uncertain, as evidenced by recent policy changes implemented by the U.S. government and subsequent court cases.

The Center’s new estimates come at a time when publics across Europe express mixed opinions on the place of immigrants in their societies. A 2018 multi-nation survey from the Center found that majorities in several European countries support the deportation of immigrants living in their countries illegally. On the other hand, when asked about refugees fleeing war and violence, the 2018 survey also found that majorities across Europe support taking them in, a group that has often entered Europe without permission and claims asylum.

The Center’s estimates are also the first comprehensive estimate for Europe in a decade. Europe’s unauthorized migrant population was last estimated for 2008 by an EU-funded team of European researchers called the Clandestino project. At that time, the number living in the EU was estimated to be 1.9 million to 3.8 million, not including asylum seekers with pending decisions. By comparison, our estimate for 2017 for EU countries only, excluding asylum seekers with a pending application, is 2.8 million to 3.7 million – the upper end of Clandestino’s 2008 estimate.2

The Center’s estimates compared with others

Meanwhile, in the UK, a London School of Economics study placed the number of unauthorized immigrants residing in the country between 417,000 and 863,000 in 2007. Ten years later, after hundreds of thousands of additional migrants from non-EU-EFTA countries entered and stayed in the UK, our 2017 estimate of 800,000 to 1.2 million unauthorized immigrants with waiting asylum seekers would be consistent with recent migration trends. For more methodological background, see our UK estimate methodology.

In Italy, hundreds of thousands of asylum seekers have landed on the country’s shores during the past decade. Many have had their asylum cases rejected, and some have remained in Italy without authorization. Adjusting for regularizations of unauthorized immigrants to authorized status during the past decade, deaths, out-migration and additional arrivals, our estimate of 500,000 to 700,000 for 2017, including asylum seekers with a pending asylum case, is similar to the estimate published by the Iniziative e Studi sulla Multietnicità Foundation. For more information, see our Italy estimate methodology.

In France, our estimate shows between 300,000 and 400,000 unauthorized immigrants lived in the country in 2017, including some 38,000 asylum seekers waiting for a decision on their case. This estimate is similar to that cited by government leaders as well as several French demographers. Also, some 300,000 people in 2017 were enrolled in a government medical plan accessed by unauthorized immigrants. For more, see our methodology for our France estimate.

Europe refers to the 28 European Union (EU) member countries in 2017 and the four European Free Trade Association (EFTA) countries – Iceland, Liechtenstein, Norway and Switzerland. This 32-country grouping includes the United Kingdom. The terms “Europe” and “EU-EFTA countries” are used interchangeably throughout this report.

The term noncitizens refers to residents of Europe who are not EU-EFTA citizens, most of whom were not born in EU or EFTA countries.

Authorized immigrants are noncitizens with residency status in an EU-EFTA country, often for a period of 12 months or longer. In Europe, this includes those granted refugee status after making an asylum claim and asylum seekers given subsidiary protection status.

The terms asylum seekers and asylum applicants are used interchangeably and refer to individuals who have applied for asylum in a European country after reaching Europe. All family members, whether male or female, children or adults, file individual applications for asylum. While the application is being considered, the applicant is temporarily protected from deportation. During this time, they are considered an asylum seeker waiting on a decision or an unauthorized immigrant with a pending asylum claim. Seeking asylum does not mean applicants will necessarily be permitted to stay in Europe. However, if an asylum application is approved, the asylum seeker is granted refugee status and given the right to work and remain in Europe. If the application is rejected, the applicant can file an appeal.

Next: 1.  Four countries account for the majority of Europe’s unauthorized immigrant population
← Prev Page
You are reading page1Page2Page3Page4Page5Page6Page7Page8Page9
Next Page →