How many U.S. adults use the internet? This might seem like a straightforward question, with a straightforward way to find out: Just ask. Indeed, there is a lot of information available from large, high response rate federal surveys as well as from surveys conducted by Pew Research Center and other organizations. However, these different sources of information measure internet use in ways that can be tricky to reconcile. Depending on the source, the estimated share of Americans who were online as of 2017 and 2018 is as low as 79% or as high as 89%.

Pew Research Center has been tracking Americans’ internet behavior for years, all the while focusing on personal use from any location. While our approach has evolved over time, the current measurement consists of two questions: “Do you use the internet or email, at least occasionally?” and “Do you access the internet on a cellphone, tablet or other mobile handheld device, at least occasionally?” In a January 2018 phone survey, 89% of U.S. adults said “yes” to at least one of these questions. 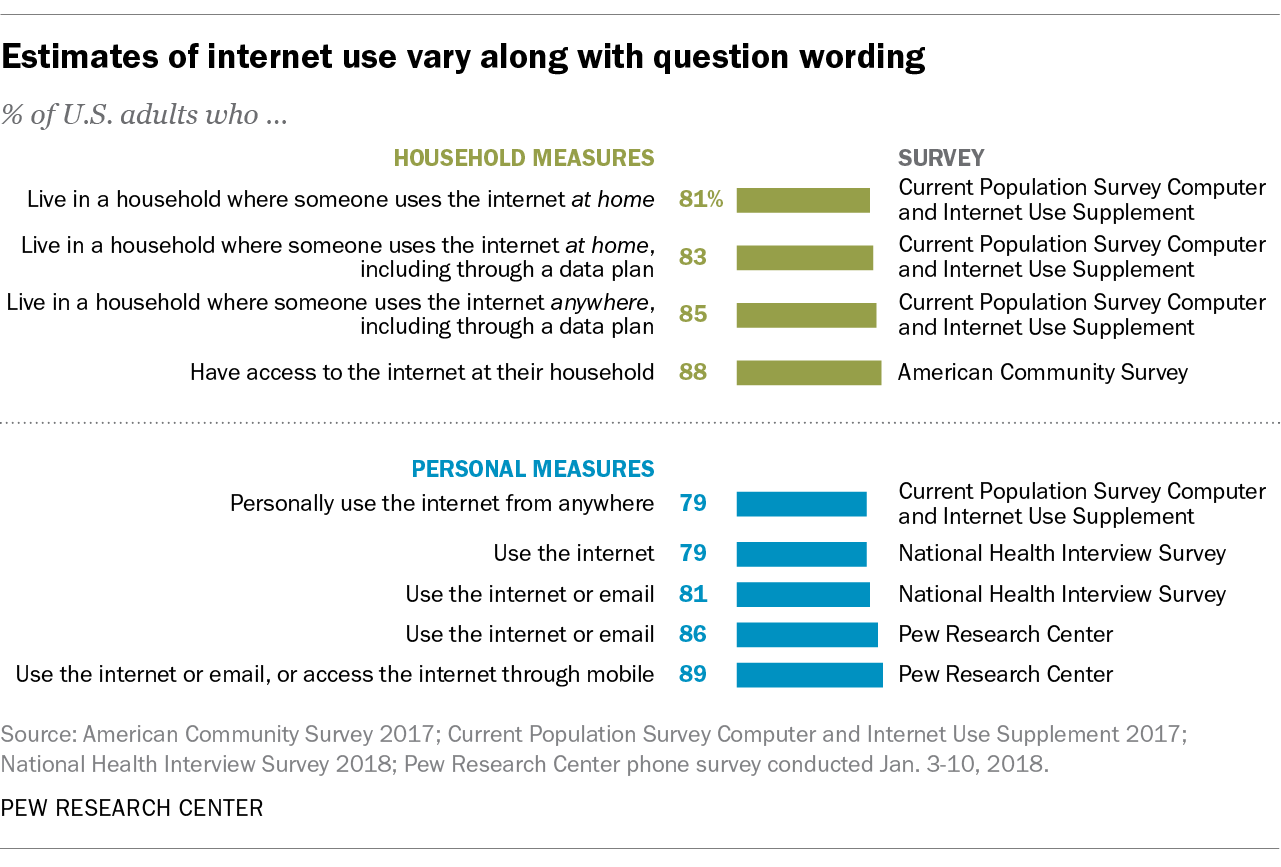 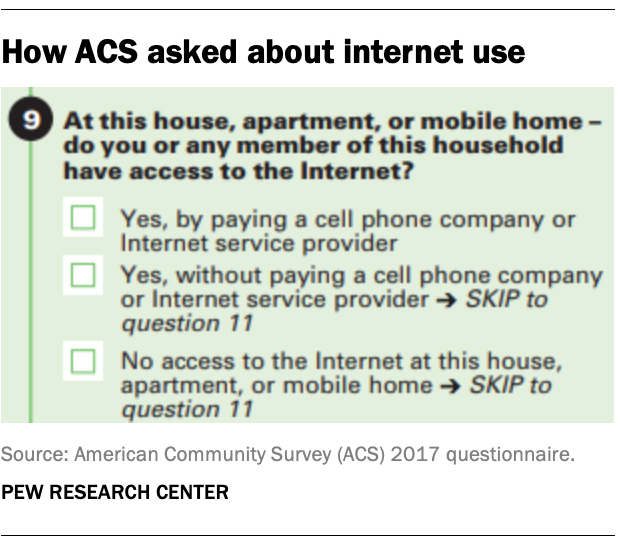 The ACS asks, “At this house, apartment, or mobile home – do you or any member of this household have access to the internet?” The ACS asks respondents to distinguish between households that have access by paying a cellphone company or internet service provider and those that have access without paying. If one assumes that a household reporting having internet access means that every member of that household has access (which isn’t always the case), then in 2017, 88% of American adults had either free or paid internet access at home. This number, however, does not include people who live in group quarters who may otherwise have internet access, such as dormitories, nursing homes or prisons, as they were simply not asked this question.

The Bureau of Labor Statistics’ CPS data takes a slightly different tack, focusing on internet use rather than access. That survey asks, “Does anyone in this household, including you, use the internet at home?” Based on this question alone, 81% of American adults live in households where someone uses the internet at home. The difference between the two figures can be at least partly attributed to the questions’ wording and scope. The CPS, for example, does ask people living in group quarters this question. And households can have internet access without anyone actually using it – for example, if it is provided for free by their community or included in a bundle with other services.

Another difference is that some people may interpret “using the internet at home” as only encompassing broadband, satellite internet, dial-up and the like, while the ACS’s response options clarify that mobile devices count. The CPS separately asks, “Does anyone in this household access the internet using a data plan for a cellphone, smartphone, tablet, mobile hotspot, or other device? This type of internet service is provided by a wireless carrier, and may be part of a package that also includes voice calls from a cellphone or smartphone.” If we include Americans who say yes to this question, the previous 81% figure rises to 83%.

All of that only answers a piece of the original question, because these questions only consider internet in people’s homes. The CPS also asks a battery of questions about whether anyone in the household uses the internet at work; at school; at a coffee shop or other business that offers internet access; while traveling between places; at a library, community center, park or other public place; at someone else’s home; or at some other location. (Each location is asked about separately.) If we once again expand the previous CPS estimate to include people who may not use the internet at home but do so somewhere else, the estimate ticks up to 85%.

Another potential measurement wrinkle comes from the various types of activities people can engage in on the internet. Some might equate “using the internet” with web browsing alone, inadvertently excluding email. Someone who only checks their email via a standalone email client or a mobile app could potentially say they don’t use the internet. Fortunately, the NHIS also asks respondents whether they send or receive emails. If we combine this with the previous estimate, we get a slight uptick to 81% of U.S. adults who either “use the internet” or use email.

It is also possible that some people who say they don’t use the internet are in fact accessing social media services such as Facebook, Twitter or Instagram. A Pew Research Center study conducted in 11 emerging and developing countries, not including the United States, found that a median of 10% did just this, reporting that they used social media but not the internet. However, the CPS only asks about social media use among people who’ve previously said they use the internet from anywhere, so the extent to which this happens among Americans is not measurable from that survey.

While these varied approaches to measuring internet use can be bewildering, they all tell roughly the same story when viewed over time. Whether the measure is internet access, home internet use, personally using the internet anywhere, or the Center’s composite measure which includes email and cellphones, more and more Americans have the internet than in previous years. 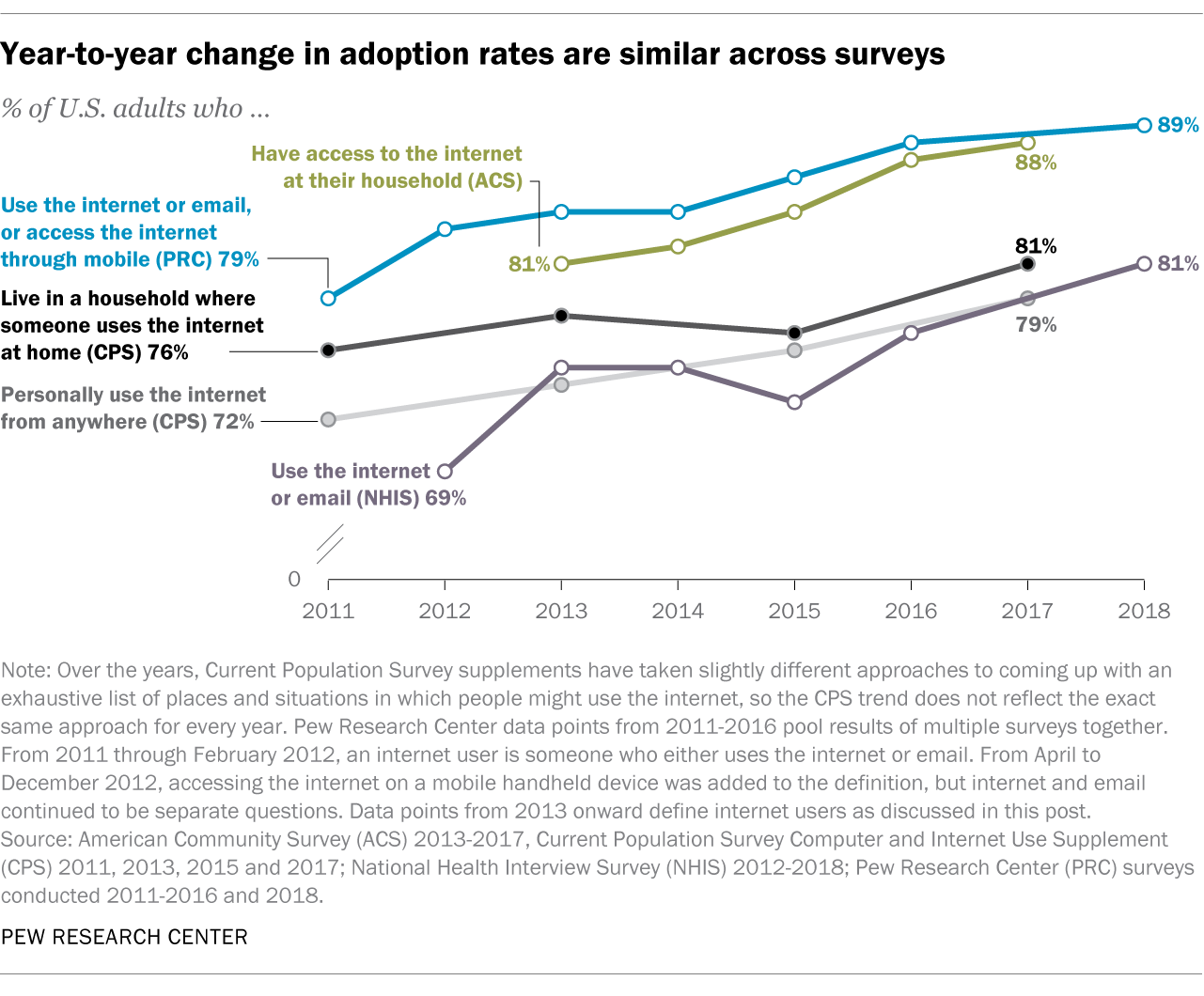 Many Americans, especially blacks and Hispanics, are hungry for help as they sort through information
59% of U.S. parents with lower incomes say their child may face digital obstacles in schoolwork
About 6 in 10 young adults in U.S. primarily use online streaming to watch TV
What our transition to online polling means for decades of phone survey trends
Most Americans rely on their own research to make big decisions, and that often means online searches
So far, Trump has granted clemency less frequently than any president in modern history
Biden Begins Presidency With Positive Ratings; Trump Departs With Lowest-Ever Job Mark
Almost all U.S. presidents, including Trump, have been Christians
How we know the drop in Trump’s approval rating in January reflected a real shift in public opinion
What Biden and Trump voters say they want the other candidate’s supporters to know about them