At a time when American society has become less religious, many people still say shared religious beliefs are an important ingredient for marital success. But married adults point to other factors, such as shared interests and even sharing household chores, as bigger keys to a successful marriage.

Nearly half of all married adults (47%) say sharing religious beliefs with one’s spouse is “very important” for a successful marriage, according to the newest report from Pew Research Center’s Religious Landscape Study. Perhaps not surprisingly, nearly two-thirds of those married to someone from the same religious tradition (64%) take this view, compared with just 24% of those married to someone who is affiliated with different religions and only 17% of those in marriages between one religiously affiliated spouse and one who is unaffiliated.

But, overall, larger percentages of Americans rank other factors higher as key ingredients to a successful marriage. We asked respondents how important each of seven factors (including sharing religion) is to marital success. Topping the list as important for adults overall is having shared interests, a satisfying sexual relationship and sharing household chores. 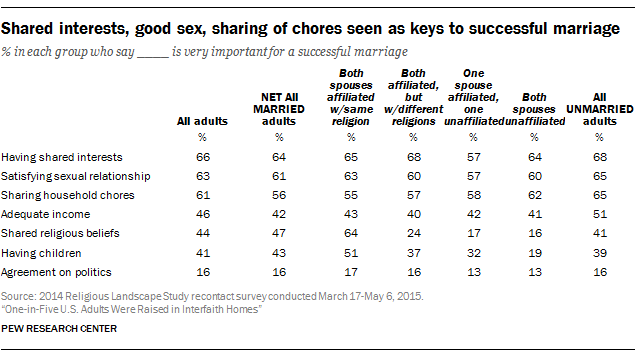 Overall, a slightly smaller share of married people say having children (43%) and having adequate income (42%) are very important for success in marriage than say the same about having shared religious beliefs. Meanwhile, fewer see agreement on politics (16%) as a necessary ingredient for a good marriage – a fact that may save more than few marriages during a contentious election year (although another recent Pew Research Center survey found that most married Clinton and Trump supporters have spouses who share their candidate preference). 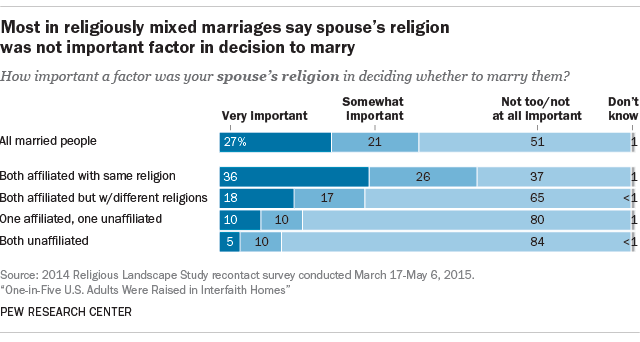 Although nearly half of married Americans say shared religious beliefs are very important to a successful marriage, considerably fewer (27%) say the religion of their spouse was a very important factor in their choosing who to marry. Another 21% say their spouse’s religion was “somewhat” important in their decision to wed.