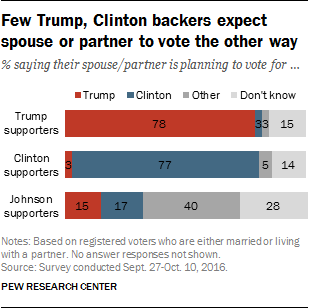 As the 2016 campaign enters its final weeks, very few voters who support either Donald Trump or Hillary Clinton expect their spouse or partner to cross the aisle and vote for the other candidate.

Overall, 78% of registered voters who support Trump for president say their spouse or partner also intends to vote for Trump, while just 3% say their partner is planning to vote for Clinton.

Comparable shares of both candidates’ supporters– 15% of those who favor Trump and 14% who back Clinton– say they do not know the voting preferences of their spouse or partner.

The new survey was conducted online September 27 to October 10 on the nationally representative American Trends Panel of 3,616 registered voters, including 2,405 voters who are either married or living with a partner. It was largely completed before the release of a videotape from 2005 showing Trump making lewd comments about women. 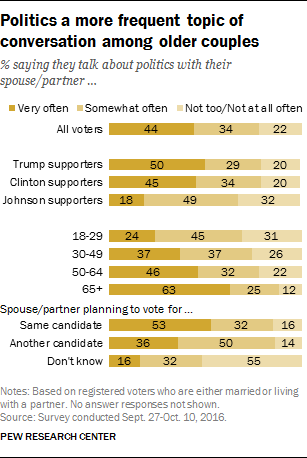 Voters who support Libertarian Gary Johnson for president are far less likely than Trump or Clinton voters to talk politics with their spouse or partner, and are less likely to know how their spouse is voting next month. Just 18% of Johnson supporters say they talk about politics very often with their spouse or partner. While 32% of Johnson supporters say their partner is voting for either Trump (15%) or Clinton (17%), four-in-ten say he or she prefers another candidate, while 28% say they do not know how their partner is voting. 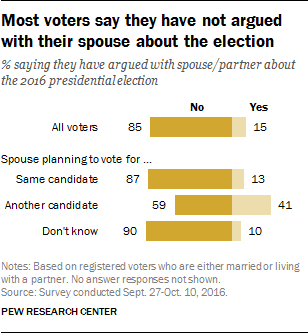 Given the broad agreement in voting preferences among those in relationships, it is not surprising that relatively few voters report arguing with their spouse or partner about the election.

Among all registered voters, 85% say they have not argued about the election with their spouse or partner, while just 15% have. But arguments are more common among the 11% of voters who say their spouse or partner will vote for a different candidate. About four-in-ten of these voters (41%) say they’ve had an argument about the election, compared with 13% of those whose partner plans to support the same candidate and 10% of those who do not know their partner’s plan.

Men who support Clinton, women who back Trump are more likely to say spouse shares their preference 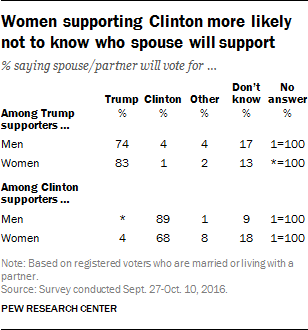 Among Trump supporters, the pattern is reversed, if somewhat less pronounced. A greater share of women than men (83% vs. 74%) say their partner or spouse also supports Trump.

These differences may largely reflect the overall gender gap in support for the two candidates.1 For instance, among all voters who are married or living with a partner in the current survey and support Clinton, 56% are women while 44% are men. Conversely, 56% of married or partnered Trump supporters are men, while 44% are women.

Parents, children and the 2016 election 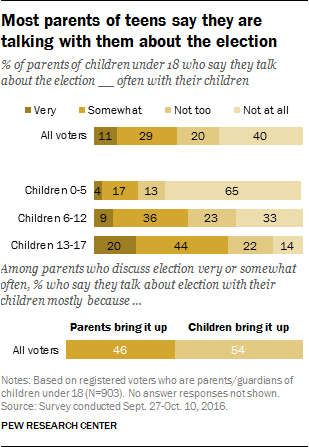 The presidential election also is a topic of discussion for parents and children, especially those in their teens. Among parents or guardians of children under 18, 11% say the election comes up very often with their children, while about three-in-ten (29%) say they talk about it somewhat often; 60% say the subject comes up not too often or not at all often.

Most Trump, Clinton Backers Say Spouses Share Their Vote Preferences
Survey reportMen who support Clinton, women who back Trump are more likely to say spouse shares their preferenceParents, children and the 2016 election
Methodology