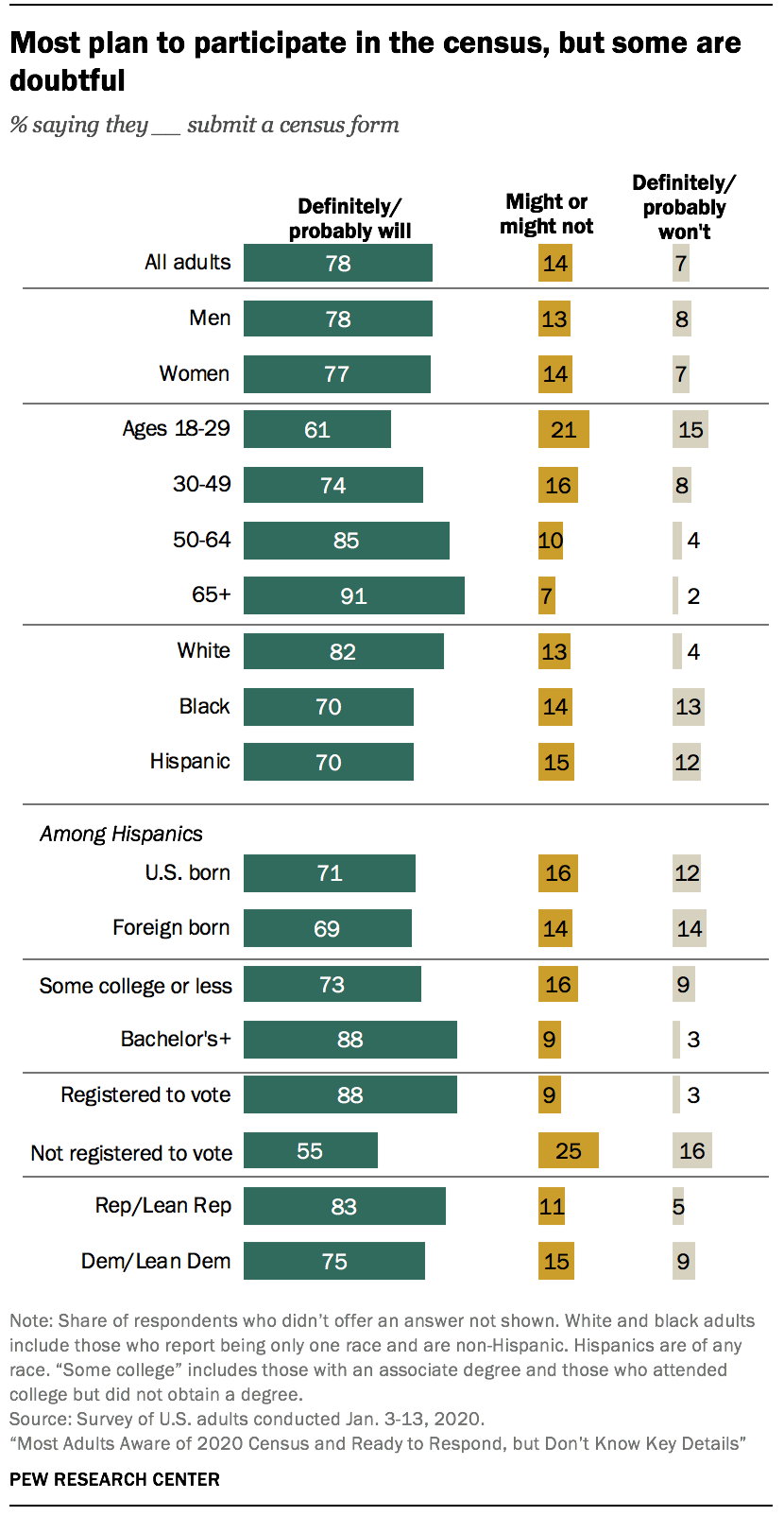 Certain groups are more likely than others to be on board. The more hesitant include black and Hispanic adults, compared with whites, as well as young adults, especially those ages 18 to 29, compared with older ones. The Census Bureau is targeting black and Hispanic populations, as well as some groups of young adults, for additional outreach because they have been hard to count in the past.

Age is linked to intention to participate: Adults ages 65 and older are about twice as likely as those ages 18 to 29 (76% vs. 35%) to say they definitely will participate. However, 9% of the youngest adults say they expect that someone else in their household probably or definitely will participate in the census, which reduces the participation gap with older adults somewhat but does not close it. These differences remain even after controlling for race, education, gender, party and voter registration.

Adults with four-year college degrees are more likely to lean toward participating than those without them. About two-thirds of college graduates (68%) say they definitely will fill out their census form, compared with half of those without a four-year degree.

Republicans (including those who lean toward the GOP) are more likely than their Democratic and Democratic-leaning counterparts to say they definitely or probably will participate in the census – 83% to 75%. These differences appear even when controlling for age, race, education, gender and voter registration status.

Participation linked to favorable attitudes about the census

Similarly, public perceptions of the potential benefit or harm that the census could bring to their community or to them personally are also related to the likelihood of participation. Most people (61%) say that participating in the census will benefit their community. Among those who hold this view, 72% say they will definitely complete their census, and another 22% say they probably will do so. In contrast, among the roughly one-third (35%) who think participating will neither benefit nor harm the community, just 32% say they will definitely participate, with another 23% saying they probably will. 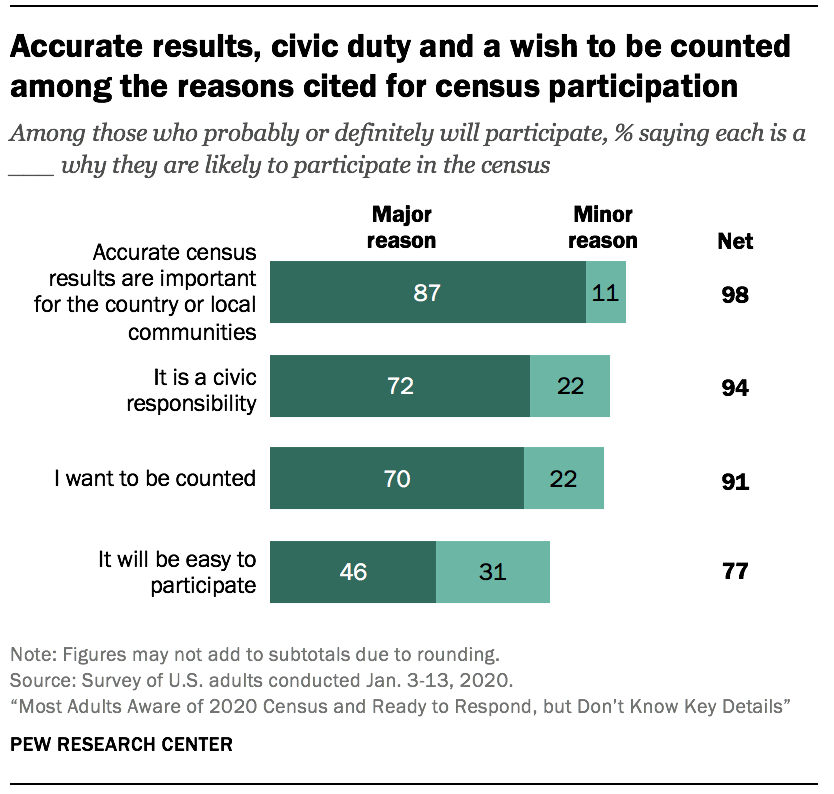 Among those who say they definitely or probably will participate, most cite at least one of three reasons offered: the importance of accurate results (87% say this is a major reason they will participate), filling out the census is a civic responsibility (72%) and “I want to be counted” (70%).

A similar share of older and younger adults who plan to participate cite each of these as major or minor reasons they plan to do so. Older adults are more likely than younger adults to cite each of these as major reasons. For example, 94% of adults 65 and older say the importance of accurate results is a major reason they plan to fill out their census forms; among those ages 18 to 29, 78% say so. Younger adults are more likely than older ones to say any of these are minor reasons for participating.

On the question of whether a major reason for participation is that the census is a civic responsibility, there are no differences among racial and ethnic groups, but foreign-born Hispanics stand out for their strong support of this reason: 80% say it is a major reason to participate, compared with 66% of U.S.-born Hispanics who say so. College graduates, compared with those who do not hold a four-year degree, are more likely to cite civic responsibility as a major reason to fill out their census forms. 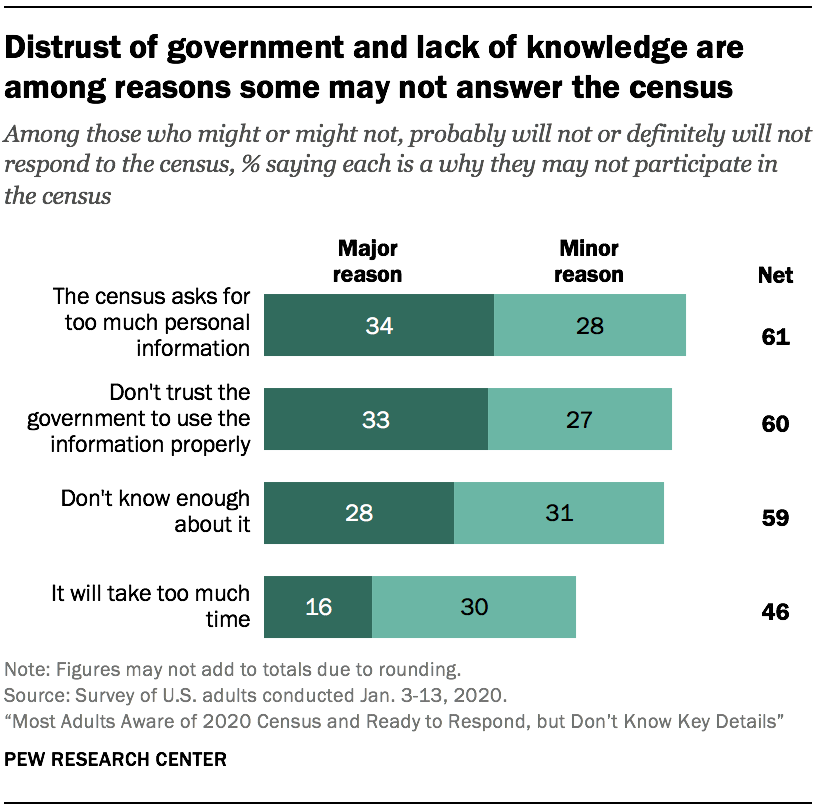 The ease of participating in the census is a relatively less important reason for participation – 46% of those who say they probably or definitely will participate say the census being easy to complete is a major reason why.

On the question of whether the census asks for too much personal information, white adults (66%) are more likely to give this as a major or minor reason than black adults (45%). Older adults, ages 50 and older, are more likely than younger ones (71% vs. 58%) to say that the census asking for too much personal information is a major or minor reason they may not participate.

When it comes to not knowing enough about the census, young adults (many of whom may be responding to the census on their own behalf for the first time) stand out from their older counterparts. Fully 73% of those ages 18 to 29 say this is a major or minor reason that they may not participate in the census, compared with 56% of those ages 30 to 49 and 43% of those 50 and older.

Near universal awareness of the census

Nearly all U.S. adults – 95% – say they have heard of the census (including a very small share who say they heard of it only after it was described to them). That includes at least nine-in-ten adults across most gender, racial, ethnic and age groups.

In Pew Research Center surveys conducted before the 2010 census, 92% of Americans said they were aware of the census in early January that year, and 94% were aware of it in mid-March. As census-related advertising and news coverage grew, the share who reported hearing something recently rose from 44% in January to 79% in March.

By March 2010, roughly nine-in-ten Americans (87%) said they definitely or probably would fill out their forms (or already had), a 6 percentage point increase from that January. However, the Center’s 2010 surveys were conducted via telephone (landline and cellphone), and due to the difference in modes, results may not be directly comparable to those of the 2020 survey conducted online.

Next: 2. What Americans know about the census
← Prev Page
Page1You are reading page2Page3Page4Page5Page6Page7Page8
Next Page →

Most Adults Aware of 2020 Census and Ready to Respond, but Don’t Know Key Details
1. Intention to participate in the census
Some hard-to-count groups less enthusiasticParticipation linked to favorable attitudes about the censusLarge majority cites importance of accurate results as reason to take censusPersonal information and lack of trust cited by those who may not respond to the censusNear universal awareness of the census
2. What Americans know about the census 3. Responding to the census online 4. The U.S. census and privacy concerns Acknowledgments Methodology Appendix: Additional charts