Most U.S. adults say they are confident that the Census Bureau will keep their personal information secure – yet a majority also say that they would be concerned if the data the 2020 census form collects from them were to be made public. With most people being encouraged to respond to the census online for the first time in 2020, those who are confident that the bureau will keep their data safe are also among the most likely to say they would prefer to respond to the census online. 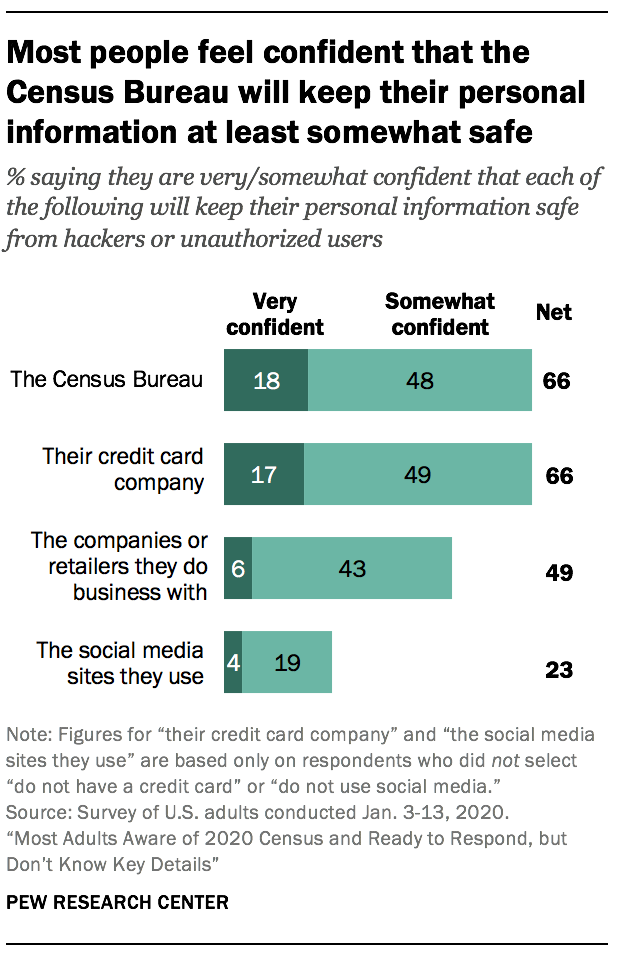 For the most part, U.S. adults are confident the Census Bureau will keep their personal information safe from hackers or unauthorized users. About two-thirds say this (66%), including 18% who say they are very confident and 48% who are somewhat confident.

There are also differences by educational attainment. Adults with at least a bachelor’s degree are more likely than those with less education to feel confident about the safety of their personal information collected by the Census Bureau (73% vs. 64%).

Despite high confidence in Census Bureau, most say they would be concerned if there were a privacy breach

Although people generally believe the Census Bureau will do an adequate job of keeping their personal information safe from hackers or unauthorized users, if there were to be a breach, most would be concerned.

For the most part, the groups who tend to have more confidence in the Census Bureau also tend to be less concerned about the consequences of this kind of data breach. For example, those with a bachelor’s degree or more education are somewhat less likely than those with some college education or less to be very concerned (34% vs. 38%).

Among other demographic groups, different patterns emerge. Although older adults are more likely than their younger counterparts to say they are confident the Census Bureau will protect their information, they are also more likely to be concerned about a breach of privacy. About four-in-ten adults ages 50 and older (42%) say they would be very concerned, compared with 33% of younger adults. Black adults are more concerned about what would happen if their personal information were made public (49% say they are very concerned) than are white (34%) or Hispanic (38%) adults.

Those who express more confidence that the Census Bureau will protect their personal information are somewhat more likely to say they would prefer to respond to the census online (rather than in person, by mail or by telephone). Some 63% of those who are very or somewhat confident in the Census Bureau would prefer to answer online, compared with 57% of those who are not too or not at all confident.

As might be expected, those who are more comfortable sharing their personal information online are also more willing to answer the census online (67% of those who are slightly or not at all concerned about sharing their information online would prefer to answer online, vs. 55% of those who are at least somewhat concerned). These factors are associated with the preference to answer the census online, even after controlling for demographic characteristics such as age, education, voter registration, race or ethnicity, gender, and party affiliation or leaning.

Learn About the U.S. Census in our Email Mini-Course2020 Census survey #1 Dataset