The 2020 census will be the first in which nearly all households will be offered the option to respond online and encouraged to do so when they receive mailings in March. Most U.S. adults across all demographic groups do not know that they will be able to fill out their 2020 census forms online, and most say they would prefer to do so, according to a Pew Research Center survey.

Only 22% of adults answer yes when asked whether people will be able to fill out their census form online in 2020.About seven-in-ten (71%) say they are not sure, and very few (6%) say online response is not an option. 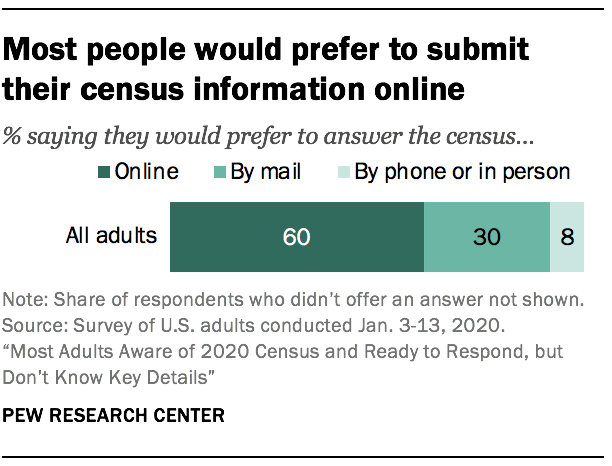 There are few differences by gender, age, race, ethnicity or other characteristics in answers to this question: The shares of men and women – as well as of black, white and Hispanic adults – who know an online option will be available range from 21% to 24%. Even among people who say they would prefer to respond online, only 25% say it will be an option in 2020.

Offered a choice of how to respond, 60% say they would prefer to answer online, followed by 30% who want to mail in their questionnaires, which has been the main method used in recent decades. The rest of those who give an answer say they prefer to respond in person (7%) or by phone (2%).

The online option is the first choice – and majority response – among men and women, white, black and Hispanic adults, and all age groups except those ages 65 and older. Among these older adults, 44% prefer to respond online and 45% by mail.

Responding online is a more popular option among college graduates than among those without a four-year degree (72% vs. 54%). As might be expected, those who use the internet every day are more likely to say they prefer to answer online than those who do not access the internet daily (63% to 31%).

Although the Census Bureau says people may respond online, by mail or by phone, the agency hopes the internet will be the primary response mode. In March, when invitations to respond are mailed to most U.S. households, they will include a unique code and an internet address. In areas where bureau research indicates people are likely to prefer to respond by mail, a paper questionnaire also will be enclosed. The bureau plans to stagger the mailings so they will be delivered from March 12 to 20.

Some say online data may not be secure 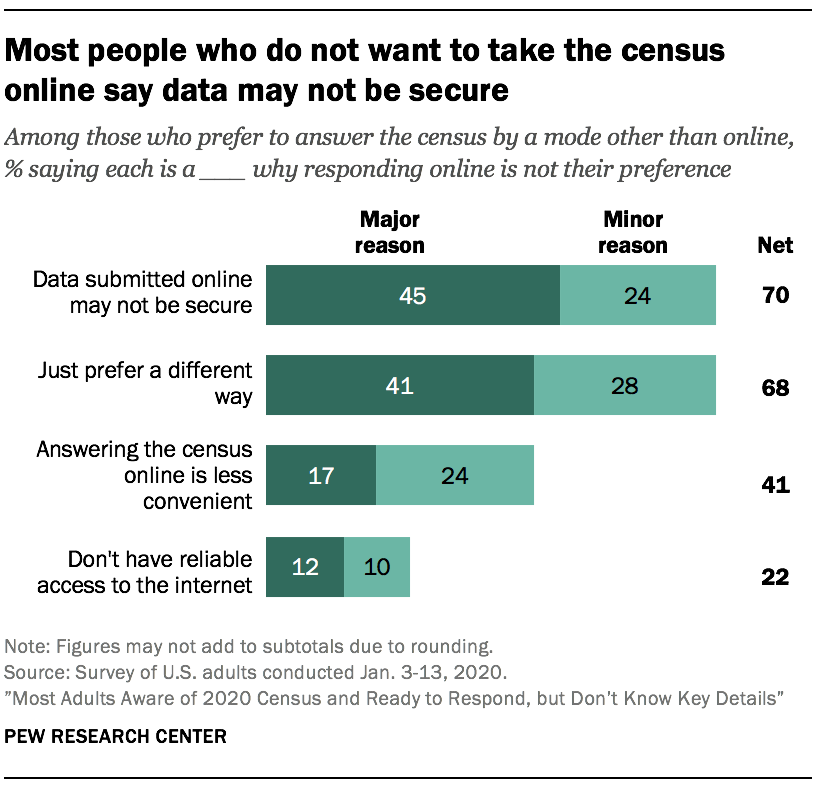 Among those who prefer not to respond online, 70% say a major or minor reason is that data submitted online may not be secure. That includes 45% who say data security is a major reason they would prefer another response mode. (As might be expected, this group is also more likely to say that they have concerns in general about providing personal information online.)

There are no differences by gender or age group on the likelihood of citing data security as a major or minor reason not to respond over the internet, but white adults (74%) are more likely to give this reason than are Hispanic adults (60%).

Data security troubles some respondents, but a similar share – 68% – say they do not want to respond online because they “just prefer a different way.” Of these, 41% say this is a major reason they do not want to give census information over the internet. Among those who give this as a major reason, adults ages 65 and older are more likely to say so than younger ones.

Only about one-in-five of those who prefer not to respond online (22%) say it’s because they don’t have reliable access to the internet. That includes 12% who say it is a major reason. Among Hispanics who say they prefer not to answer online, about a third (36%) say it’s because they don’t have reliable internet access, higher than the white share (19%). This also is more often offered as a reason by those without a four-year college degree (25%) than by those with a bachelor’s degree or more (13%).

Next: 4. The U.S. census and privacy concerns
← Prev Page
Page1Page2Page3You are reading page4Page5Page6Page7Page8
Next Page →

Most Adults Aware of 2020 Census and Ready to Respond, but Don’t Know Key Details 1. Intention to participate in the census 2. What Americans know about the census
3. Responding to the census online
Some say online data may not be secure
4. The U.S. census and privacy concerns Acknowledgments Methodology Appendix: Additional charts