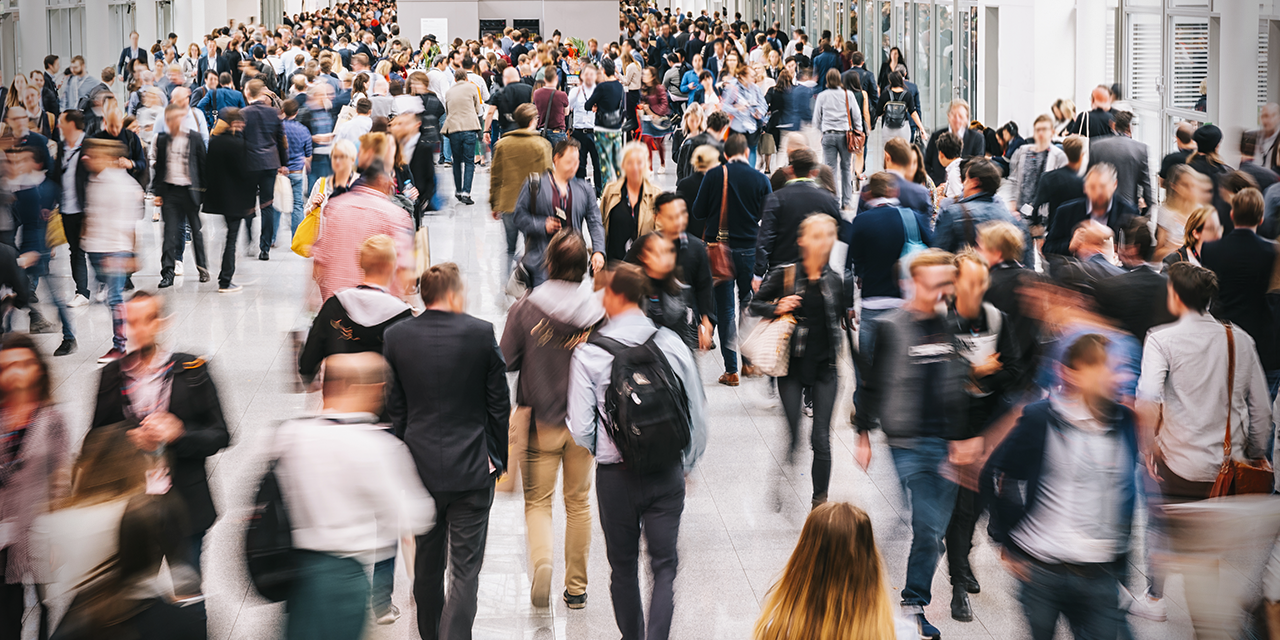 As the 2020 census gets underway, we conducted this study to better understand what Americans know about the census, their attitudes about it and whether they plan to participate. We also looked at the findings from a survey taken in January 2010 to see how attitudes have changed since the last census.

For this report, we surveyed 3,535 U.S. adults in January 2020. The adults who were surveyed are members of Ipsos Public Affairs’ KnowledgePanel, an online survey panel that is recruited through national, random sampling of residential addresses and landline and cellphone numbers. KnowledgePanel provides internet access for those who do not have it and, if needed, a device to access the internet when they join the panel. To ensure that the results of this survey reflect a balanced cross section of the nation, the data are weighted to match the U.S. adult population by gender, age, education, race and ethnicity and other categories. The survey was conducted in English and Spanish.

For more information on how we conducted this study, see its methodology section.

As the 2020 census gets underway, most U.S. adults are aware of it and are ready to respond, but many do not know what it asks or how to participate. A majority incorrectly believes a citizenship question is on the questionnaire, and only about one-in-five know they will have the option of answering online, according to a new Pew Research Center survey.

Intention to participate is high overall, but there is somewhat less enthusiasm among some groups the Census Bureau has found difficult to count in the past. These include black adults, Hispanic adults, younger people, and those with less education. There also are partisan differences in who intends to respond.

The Pew Research Center survey of 3,535 U.S. adults was conducted online Jan. 3-13, in English and Spanish, shortly before the government’s count of everybody living in the U.S. got underway Jan. 21 in Alaska. Most U.S. households will receive 2020 census mailings in March asking them to respond online, by mail or by phone.

The survey finds that nearly all adults (95%) have heard of the census, and half say they have heard something about it recently. Most hold it in high regard: Two-thirds of adults say the census is very important to the country. About eight-in-ten (78%) say they definitely or probably will fill out and submit a census form. (That share rises to 81% when including people who say someone else in their household probably or definitely will participate.) 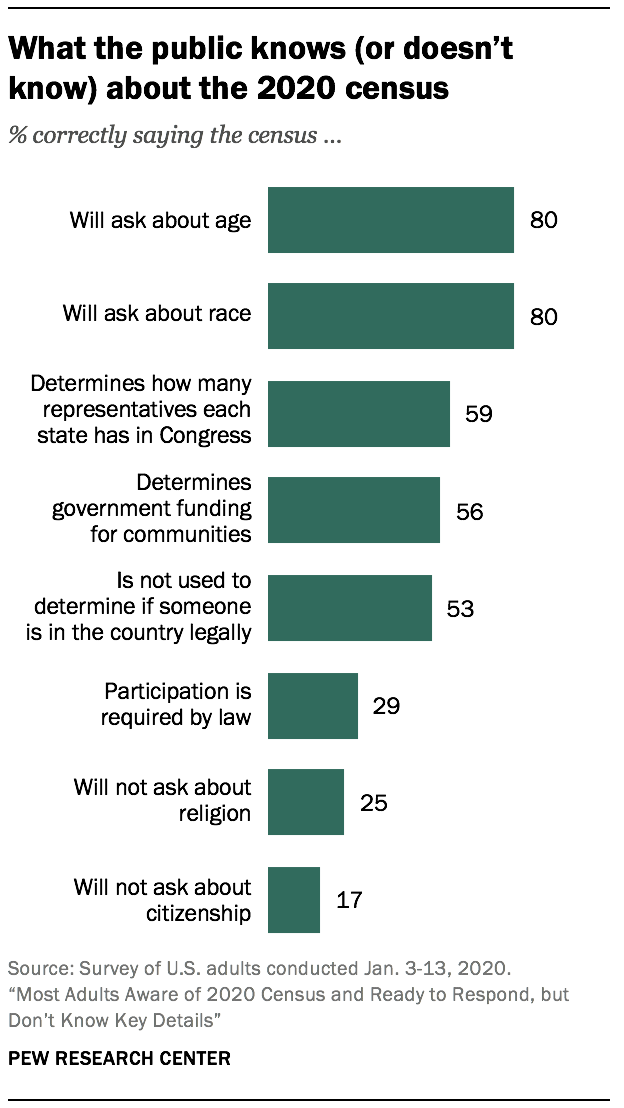 The survey also shows that many are unaware of some important aspects of the 2020 census. Most do not know that the census does not ask about citizenship or religion. As in 2010, only a minority knows that the law requires them to respond.1

In the survey, only 17% of adults answer correctly that a citizenship question is not on the 2020 census. A majority (56%) thinks citizenship is asked and 25% are unsure. The Trump administration sought to ask everyone living in the country whether they are a U.S. citizen, but it dropped the question from the 2020 census form last July after the U.S. Supreme Court ruled against it.

The mistaken belief that citizenship is on the census is held by about half of men and middle-aged adults, as well as by a majority of women and young and older adults. A majority of white and black adults think citizenship is asked, as do 49% of Latinos. If “not sure” responses are included, three-quarters or more of each of these demographic groups do not know that there is no citizenship question on the 2020 census.2 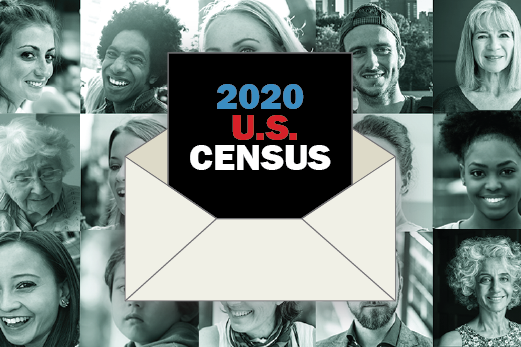 Only 25% of adults know that their religious affiliation will not be asked on the census questionnaire. Another 26% say religion is on the form and 47% say they’re not sure.

A major innovation of the 2020 census is that most households will be able to respond online. The Census Bureau hopes that most of them do, because internet responses are quicker and less expensive than the traditional method of mailing paper questionnaires. 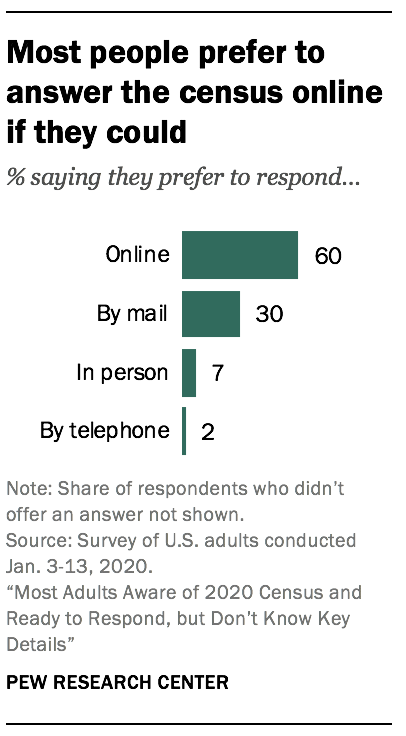 Only about one-in-five adults (22%) know they will have the option to answer online. Most people (71%) are unsure whether internet response is an option in 2020, and a few (6%) say it will not be. Still, most adults (60%) say they would prefer to answer over the internet if they have the option, rather than by mail (30%), on the phone (2%) or with an in-person interviewer (7%).

Older adults are an important exception. Adults ages 65 and older are split between preferring to respond online (44%) or by mail (45%).

Those who hesitate about completing the census form online cite both data security and personal preference as reasons. Seven-in-ten say a major or minor reason is that online data may not be secure, and a similar share (68%) say a major or minor reason is they “just prefer a different way.” Smaller shares say they don’t want to respond online because it’s less convenient (41%) or because they do not have reliable internet access (22%).

Whether or not they prefer to participate online, most people say they would be very concerned (37%) or somewhat concerned (29%) if there was a data breach and their census responses were released.

Still, people are more likely to trust the Census Bureau to keep their information safe than they are to trust social media companies or retailers they do business with to do the same. Two-thirds say they are somewhat or very confident the Census Bureau will safeguard their data, about the same level of trust the public has in credit card companies.

Some groups less likely to say they will participate

The differences among groups in intention to participate in the census follow a familiar pattern, reflecting similar gaps in 2010 and the Census Bureau’s long-term challenge in reaching those who are hard to count. Although about eight-in-ten U.S. adults (81%) expect they or someone in their household will definitely or probably respond to the census, that share declines to about three-quarters for adults who are black, Hispanic, or without a four-year college degree, and to seven-in-ten for those ages 18 to 29.

There also is a partisan difference in intention to participate: 85% of Republicans, but 80% of Democrats (including those who lean to one of the two parties), say they or someone in their household probably or definitely will submit a census form. That difference holds even when accounting for differences in demographic characteristics of Democratic and Republican partisans. 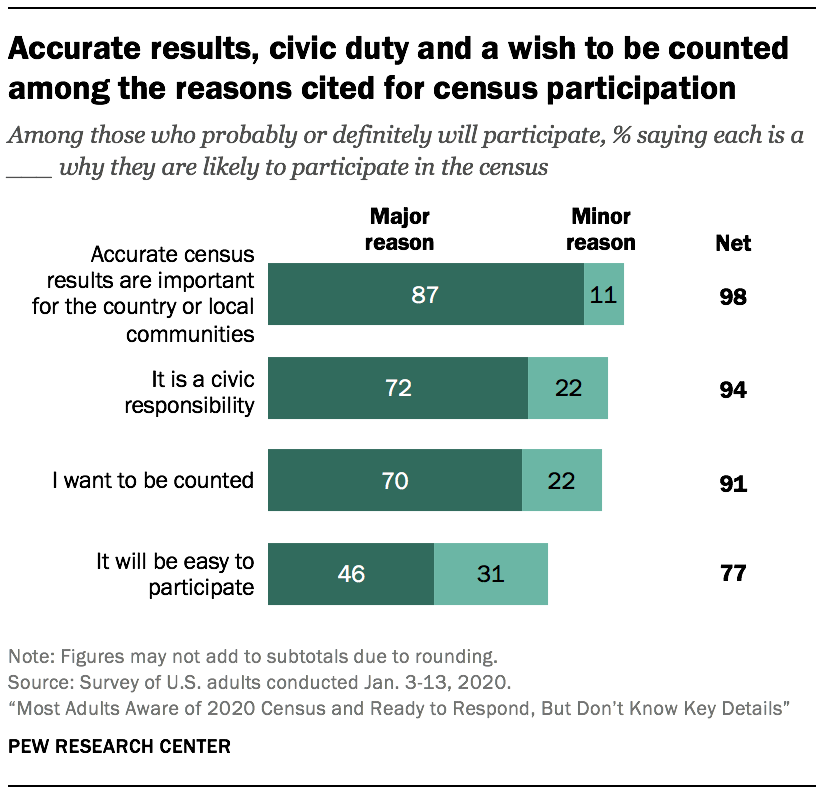 Policy-oriented and personal reasons are cited by those inclined to participate: Large majorities who say they probably or definitely will fill out their forms point to the importance of accurate results, the census being a civic responsibility and their personal desire to be counted as major or minor reasons why they will participate.

Among those who at best might or might not participate, negative attitudes about government may be linked to their census plans. Roughly a third (34%) say a major reason they might not or will not participate is that the census asks for too much personal information, and a similar share say a major reason is that they don’t trust the government to use the information properly. 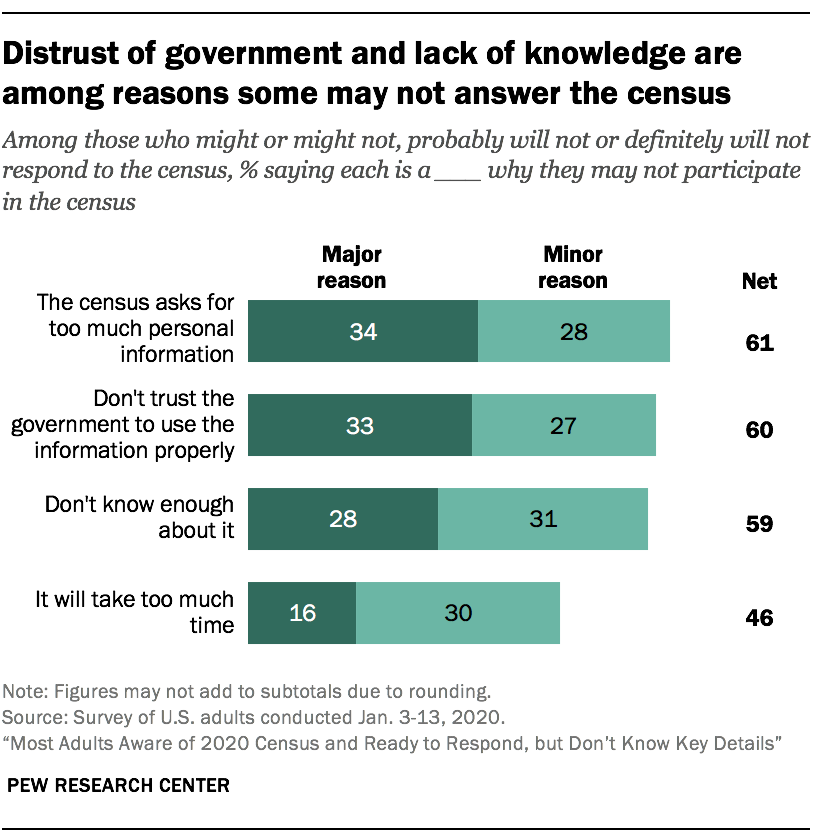 For adults younger than 30, 40% say a major reason they do not lean toward participating in the census is that they don’t know much about it – not surprising given that for many it would be the first time they answer on their own.

It’s important to note that, according to Census Bureau research, people who say they intend to participate in the census do not necessarily follow through. The actual national census response rate in past censuses has been lower than the share of adults who say they intend to participate (in 2010, 76% mailed back their forms even though a 2008 survey showed 86% said they definitely or probably would). The lower the self-response rate, the more the Census Bureau spends on sending employees to knock on the doors of nonresponding households, raising the cost of the census and possibly producing less accurate responses.

In addition, census awareness among the public rises as the census approaches. In 2010, as the census got closer, the share saying they would participate increased in a Pew Research Center survey.

Does what people know about census questions and uses affect their likelihood of participating?

There are a few possible explanations for this: Familiarity with the census is associated with perceptions that the census is important, and it may also lead to comfort with the idea of participating. In addition, those who are knowledgeable about the census tend to have demographic characteristics associated with participating in surveys in general, while those who are less knowledgeable tend to be from groups that are less likely to participate in surveys, including groups that the Census Bureau has found it hard to count in the past.

Among other important links to people’s intention to participate in the census is what people think about its importance to the country, as well as its potential benefits or harms to individuals or communities. People who say the census is very important to the country are far more likely than those who see the census as somewhat important to say they definitely will participate (75% to 20%). Similarly, those who see a community benefit from taking the census are more likely than those who see neither harm nor benefit to say they definitely will participate (72% to 32%). Knowledge about the census and how it is used is strongly related to perceptions of the census’s importance and its potential benefits to individuals and communities.

Unfortunately, surveys like this one cannot definitively determine whether mistaken beliefs that citizenship is asked on the census or that the census is used to determine whether someone is in the country legally will affect participation. All the knowledge questions in this survey – including those unrelated to immigration status – are associated with intention to participate, and it is impossible to disentangle whether a specific perception or misperception directly affects intention to participate or is simply serving as an indicator of overall familiarity with the census.

References to college graduates or people with a college degree comprise those with a bachelor’s degree or more. “Some college” includes those with an associate degree and those who attended college but did not obtain a degree.

Foreign born refers to people born outside of the United States, Puerto Rico or other U.S. territories to parents neither of whom was a U.S. citizen, regardless of legal status.

U.S. born refers to individuals who are U.S. citizens at birth, including people born in the United States, Puerto Rico or other U.S. territories, as well as those born elsewhere to parents who were U.S. citizens.

Next: 1. Intention to participate in the census
← Prev Page
You are reading page1Page2Page3Page4Page5Page6Page7Page8
Next Page →

Most Adults Aware of 2020 Census and Ready to Respond, but Don’t Know Key Details
Most unaware that citizenship and religion aren’t asked on the 2020 census formMost want to answer online but don’t know they can this yearSome groups less likely to say they will participate
1. Intention to participate in the census 2. What Americans know about the census 3. Responding to the census online 4. The U.S. census and privacy concerns Acknowledgments Methodology Appendix: Additional charts