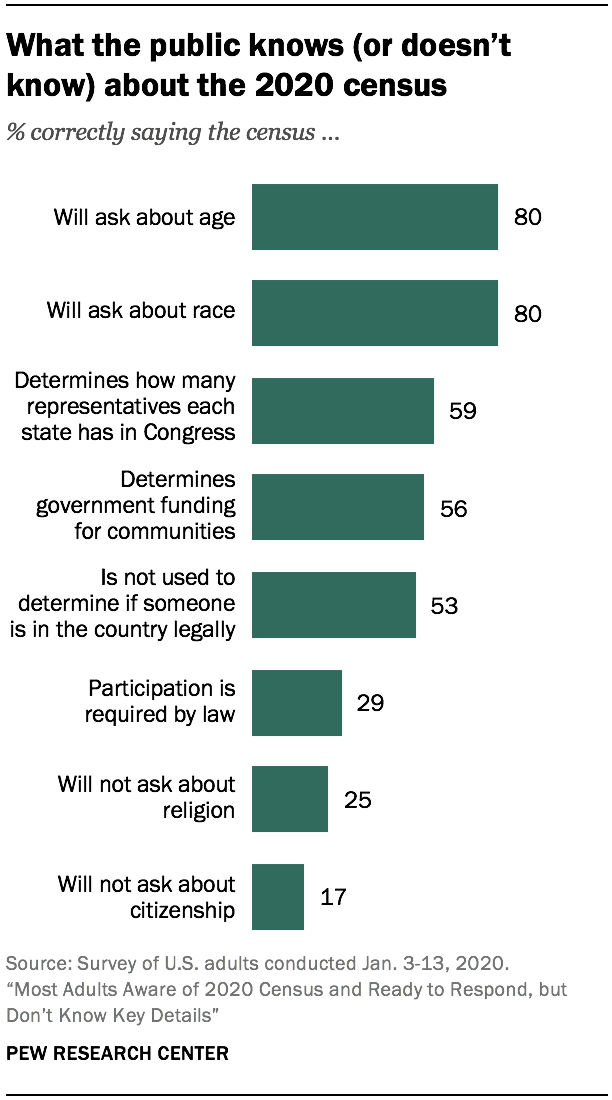 While awareness of the U.S. census is nearly universal, much of the public is hazy about important details such as whether participation is required by law and what specifically will be asked on the census form. This lack of familiarity is not new; the public in early 2010 had a similar level of knowledge of many of these facts.

The survey shows that much of the public knows basic facts about how census data will or will not be used. A majority (59%) correctly say that the census is used to decide how many representatives each state will have in Congress, and nearly as many (56%) say that the census is used to decide how much money communities will get from the government. Just over half (53%) are aware that the census is not used to determine whether someone is in this country legally; 14% erroneously believe that it is used for this purpose. Knowledge of how census data is used is roughly similar to what it was in January 2010, when Pew Research Center asked these questions of the public in a telephone survey.3

Large majorities of the public in the current survey know that the census will collect information about age and race (80% each). But most people are unaware that citizenship and religious affiliation will not be asked about. A majority (56%) believe – incorrectly – that citizenship will be asked about, and just 17% are aware it will not be on the form. Only a quarter could correctly state that questions about religion are not asked.

The survey also asked about a new feature of the census – the fact that people will be able to fill out their census form online. Just 22% of respondents correctly say that there will be an option to complete the census online. While only 6% incorrectly believe there will be no online option, 71% say they are unsure.

Older and more educated adults know more about the census 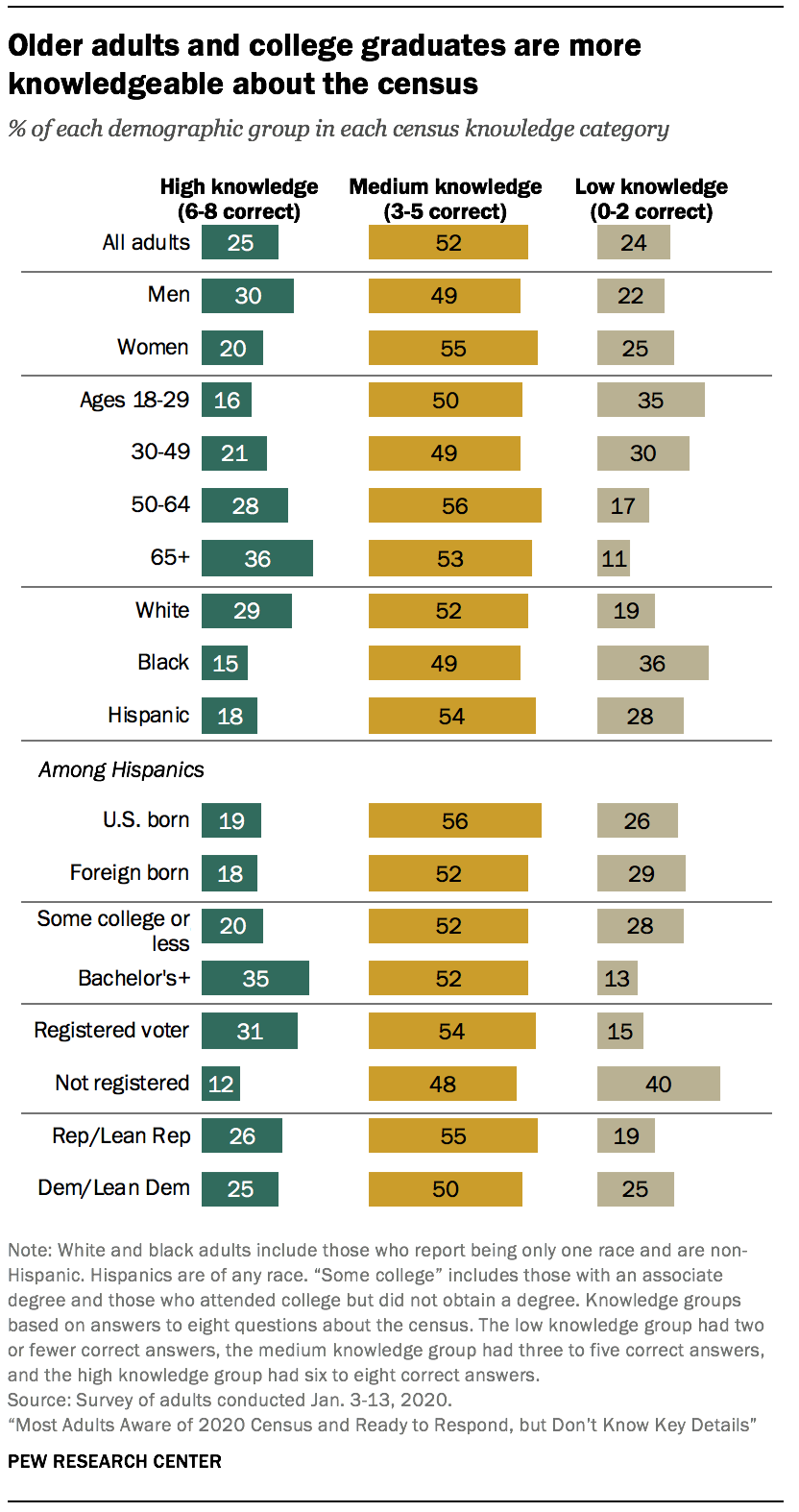 The differences were even more stark on certain questions: For example, 76% of college graduates but only 52% of those without a four-year college degree correctly state that the census is used to determine the size of each state’s congressional delegation. And 76% of those 65 and older know this, compared with just half among those under 30. This is not surprising, since older people have experienced more rounds of the decennial census, and more formal education likely exposes individuals to information about the census and how it is used.

But even the oldest or most highly educated respondents struggled with certain questions. Only 26% of college graduates are aware that there will be no citizenship question on the census form, a higher share than among those without a four-year degree (13%) but far from a majority. Only 21% of those 65 and older could state that there would not be a citizenship question on the census; 16% of those under 30 know this. Similarly, just a third of college graduates (33%) could correctly state that answering the census is required by law, only slightly higher than the 28% of those without a college degree who say this. But older respondents are considerably more likely than younger ones to be aware of the legal requirement to answer the census. Among those 65 and older, 46% correctly answered this question, while just 21% of those under 30 and just 22% of those ages 30 to 49 could do so.

One question for which age and education made little difference was awareness of the option to complete the census online. Fewer than 30% of respondents across all major demographic groups were aware of the online response option. 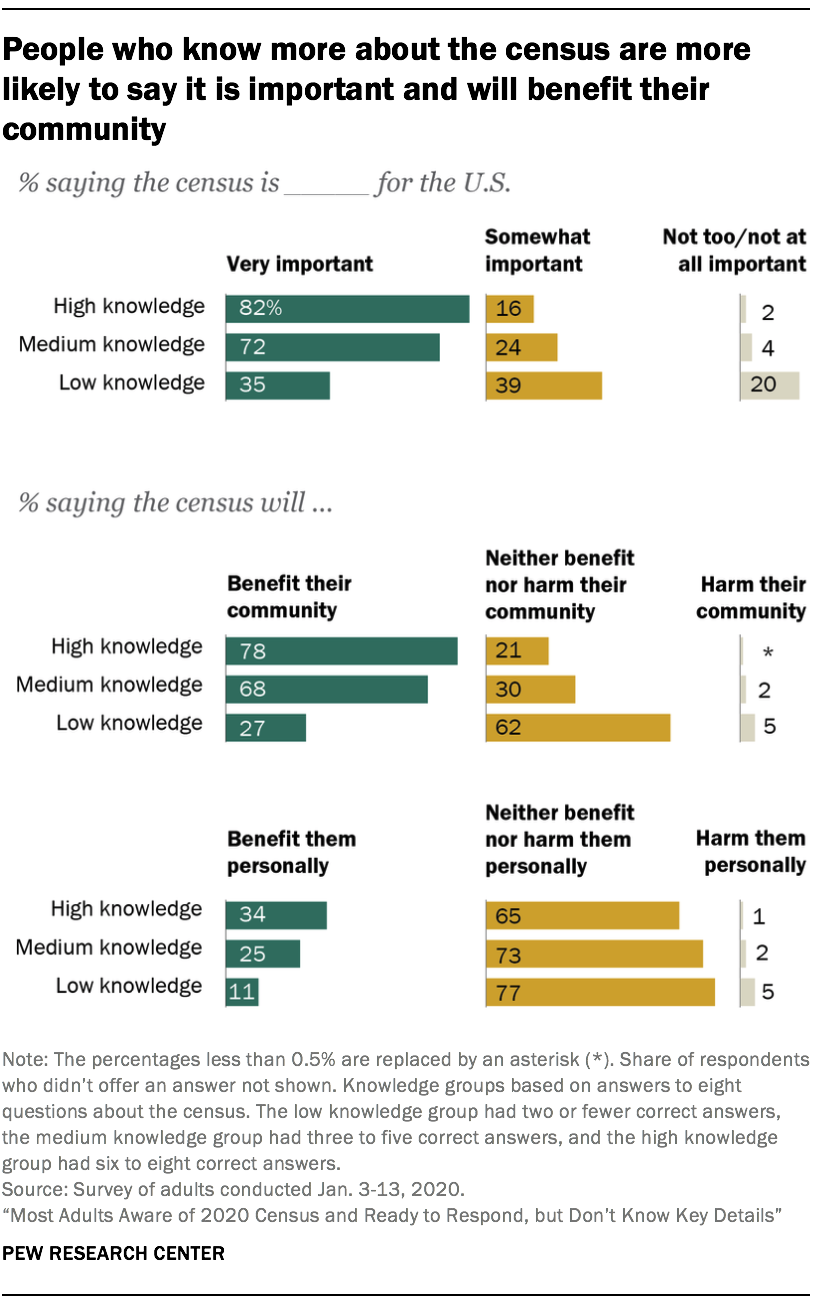 Next: 3. Responding to the census online
← Prev Page
Page1Page2You are reading page3Page4Page5Page6Page7Page8
Next Page →

Most Adults Aware of 2020 Census and Ready to Respond, but Don’t Know Key Details 1. Intention to participate in the census
2. What Americans know about the census
Older and more educated adults know more about the censusGreater knowledge of the census is linked to more positive views of its potential impact
3. Responding to the census online 4. The U.S. census and privacy concerns Acknowledgments Methodology Appendix: Additional charts