The analysis in this report is based on the combination of job skills and preparation data from the U.S. Department of Labor’s Occupational Information Network (O*NET) and occupational employment and wage data from the Current Population Survey (CPS).

Occupational Information Network (O*NET): The O*NET database provides a variety of information related to the requirements of more than 950 occupations. The occupations are classified according to a coding scheme that is consistent with the 2010 Standard Occupational Classification. Among other things, O*NET includes information on 35 specific skills representing attributes of workers related to work performance (critical thinking or service orientation, for example). Each skill is rated on a scale of one to five measuring its importance to job performance, from not important to extremely important. This report focuses on the analysis of the importance ratings of the 35 job skills in the O*NET data.32 The ratings are based on information generated by trained job analysts.

Much of the analysis in this report used the most recent version of the O*NET database available at the time (Version 23, released August 2018). This file contains importance ratings of skills for 967 occupations (at the eight-digit level of classification). One occupation – mathematical technicians – was dropped because it was last evaluated prior to 2002. The importance ratings for the remaining 966 occupations were developed by analysts on a rolling basis from 2010 to 2018, with about 10% or slightly more of occupations rated in any given year.

Some of the analysis in this report used one of the first releases of O*NET (Version 5.1, released November 2003) with the goal of evaluating changes in skill ratings within occupations. This file contained importance ratings for 901 occupations, after the omission of mathematical technicians. The importance ratings in the 2003 O*NET data were developed by analysts using data collected mostly from the late 1970s through the early 1990s for the Dictionary of Occupational Titles (DOT). For that reason, changes in skills ratings from 2003 to 2018 are referred to as changes from circa 1990 to 2018. However, because of revisions to the methodology between the DOT and the O*NET the estimated changes in skill ratings within occupations should be treated with caution.

Current Population Survey (CPS): Conducted jointly by the U.S. Census Bureau and the Bureau of Labor Statistics, the CPS is a monthly survey of approximately 55,000 households and is the source of the nation’s official statistics on unemployment. The CPS sample covers the civilian, non-institutionalized population. In this report, 12 monthly CPS files in each year were combined to generate annual estimates of occupational employment in 1980 and 2018. Wages are estimated from the annual outgoing rotation group (ORG) files which consist of the sample of workers from whom wage information was collected. Some of the CPS microdata files used in this report are the Integrated Public Use Microdata Series (IPUMS-CPS) provided by the University of Minnesota.33

For the analysis in this report, we group the 35 skills rated in the O*NET into five major families of job skills – social, fundamental, analytical, managerial and mechanical (see table below). The grouping is similar to the O*NET classification of skill categories. In general terms, social skills refer to interpersonal skills, fundamental skills lay the foundation for acquiring other skills, analytical skills capture scientific and technological prowess, managerial skills pertain to the management of people, things and finances, and mechanical skills describe the ability to work with and to control machinery or equipment. 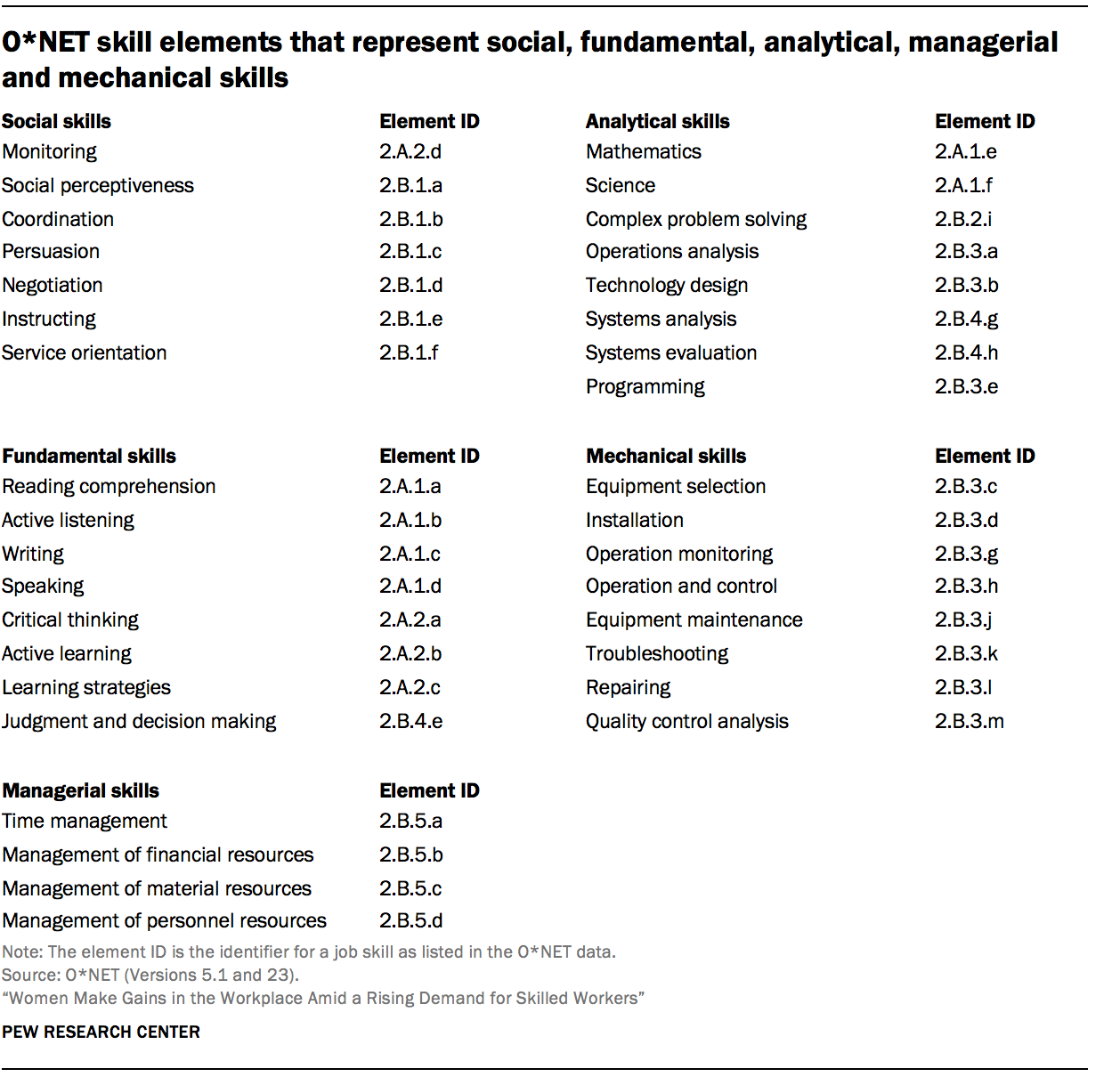 The final step in the process of matching the 2003 and 2018 O*NET files was to aggregate occupations from the eight-digit level of detail, e.g. code 13-1071.01, to the six-digit level of detail, e.g. code 13-1071. The result was a dataset consisting of 670 occupations at the six-digit level matched from 2003 to 2018. In addition to facilitating the matching of occupations over time, as in the example above, the aggregation was also done for consistency with the analysis based on the matching of O*NET data to CPS data (see below).

Because O*NET does not contain employment or wage information for occupations it is necessary to match the skills data to CPS data. Although both the 2018 O*NET and the CPS use the 2010 standard occupational classification there is one key difference: O*NET lists more than 950 occupations coded at the eight-digit level, the finest detail possible, whereas the CPS lists fewer than 500 occupations coded at the four-digit level. In other words, an occupation listed in the CPS typically encompasses more than one occupation listed in O*NET. Thus, occupational data in O*NET must be aggregated to match up to the CPS data. This was done in three steps, as detailed below:

Step 3: Because occupational classifications are frequently revised, an additional step was necessary to match the job skills and preparation ratings to a harmonized occupation coding scheme that could be used to trace employment and wage trends going back in time. The scheme in the IPUMS-CPS data (OCC2010) provides a consistent, long-term classification of occupations based on the 2010 standard occupational classification. Because of some inconsistencies between the latest CPS occupational codes and the harmonized occupation coding in OCC2010, additional aggregation and recoding was needed to maximize the number of occupations with valid skill ratings. For example, job skills and preparation ratings for “advertising and promotions managers,” “marketing and sales managers,” and “public relations managers” – three distinct four-digit occupations in the current CPS – were averaged using employment weights to estimate the ratings for “managers in marketing, advertising, and public relations” – a single occupation in the time-consistent OCC2010 classification.

Grouping occupations by the importance of a skill

The relative importance of a skill

Wage estimates pertain to a worker’s main job. Workers paid by the hour report hourly wages. For workers who are not paid by the hour, the hourly wage is calculated as weekly earnings divided by the usual numbers of hours worked in a week. The CPS collects data on wages from outgoing rotation groups only, which represent one-quarter of the monthly sample. Self-employed workers are excluded from this subsample. Wages are adjusted for inflation with the Consumer Price Index Research Series (CPI-U-RS).

Using regression analysis to determine how skills, education and other factors affect the gender wage gap

How much a worker earns on her job is related to her skills, education, experience and other qualifications, and to the nature of the job, such as occupation and industry. In this report, a regression analysis is used to determine the relationship between the hourly wages of women and men and the following characteristics for which data were available: job skills, education level, occupation, industry, union membership, part-time work, age, race and ethnicity, geographic region, and metropolitan area status. Regressions are estimated separately for women and men following an approach in common use (see table below for the results).

The results from the regressions are used to estimate the earnings of women, relative to men’s earnings, assuming women and men had the same characteristics on average – that is, if they worked in jobs with the same skill requirements, had the same education levels, were equally likely to be union members, and so on. (This widely used technique is known as the Blinder-Oaxaca decomposition.) The regression analysis can also be used to assess how a difference between women and men with respect to any given characteristic, say the average rating on nonmechanical skills, may contribute to the gender wage gap.

Women held a slight edge over men on nonmechanical skills in 2018: The average rating on nonmechanical skills for women was 2.75 compared with 2.69 for men, with the difference arising from how women and men were distributed across occupations. Women also benefited from a lower rating on mechanical skills compared with men, an average of 1.51 versus 1.94. Gender differences in skill endowment are among the “explained” differences in the earnings of women and men. Examples of other differences include the greater share of women (40%) than men (35%) who have a bachelor’s degree or higher level of education and the greater share of women (18%) than men (7%) who work in administrative support occupations. 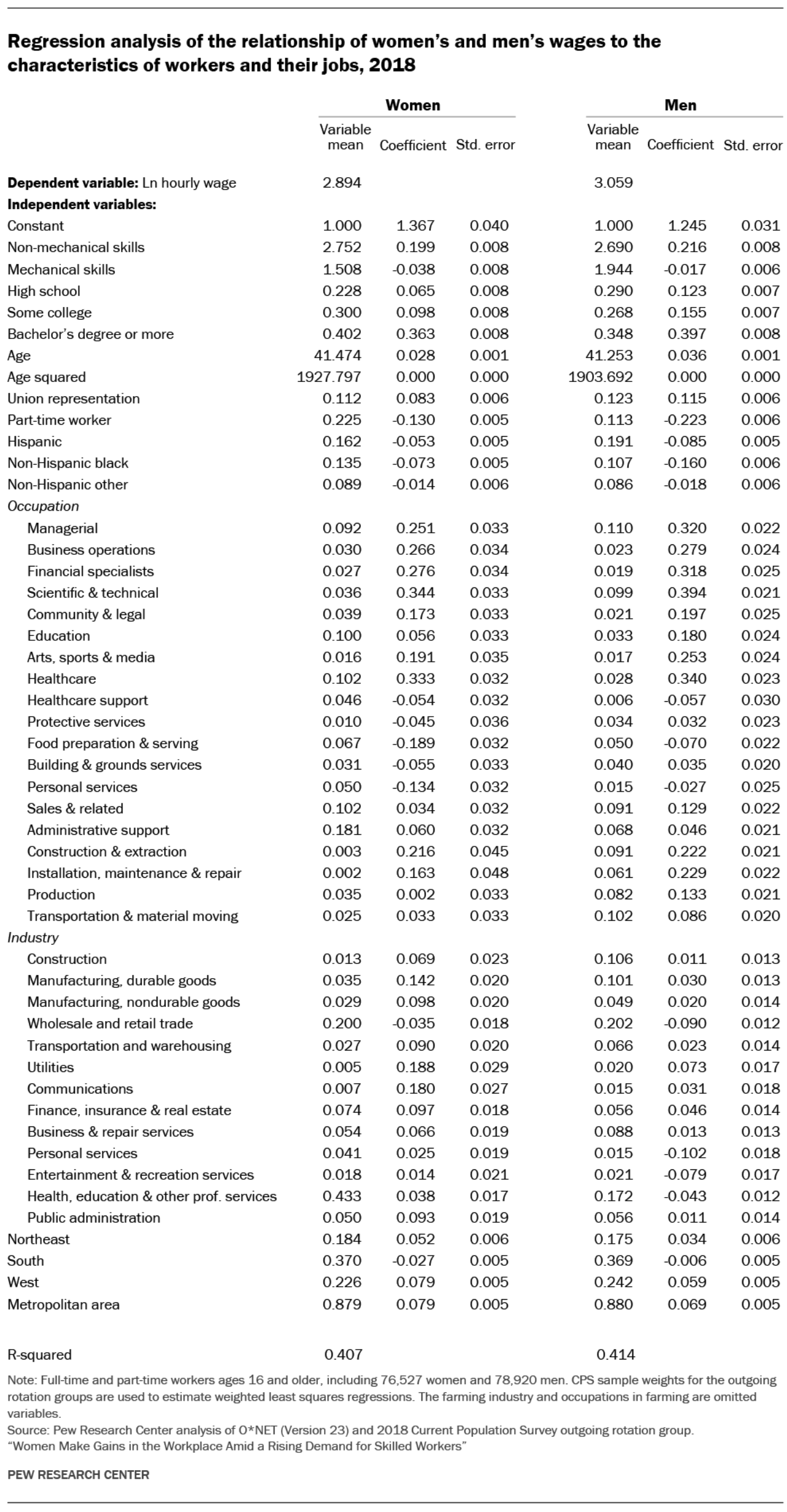 Next: Appendix
← Prev Page
Page1Page2Page3Page4Page5You are reading page6Page7
Next Page →

Women Make Gains in the Workplace Amid a Rising Demand for Skilled Workers 1. Employment is rising most rapidly in jobs most in need of social, fundamental and analytical skills 2. Women’s lead in skills and education is helping narrow the gender wage gap 3. In a technology-driven era, social and fundamental skills still reign supreme within occupations Acknowledgments
Methodology
Data sourcesDetermining job skillsLinking the 2003 and 2018 O*NET data filesMatching O*NET and CPS dataGrouping occupations by the importance of a skillThe relative importance of a skillHourly wagesUsing regression analysis to determine how skills, education and other factors affect the gender wage gap
Appendix