Even as automation, smart speakers and other technology-driven applications reshape daily lives, personal engagement and a mastery of fundamentals remain valued in the workplace. In 2018, social and fundamental skills were rated more important than analytical, managerial or mechanical skills in a larger number of jobs. Evidence also suggests that the importance of social skills within occupations has increased more than the importance of other skills in recent decades, a trend that would drive a growing need for social skills regardless of any changes in employment across occupations. Newer jobs, some brought into existence by new technologies, may also fuel a growing need for analytical skills.

In the labor market, the change in demand for a skill is the result of two forces: a rise in employment in jobs more in need of that skill and an increased need for that skill to perform a given job. Shifts in employment have played an important role in raising the demand for social and fundamental skills since 1980 (see Chapter 1). It also appears likely that the need for social and fundamental skills, as well as for managerial skills, has intensified within most occupations in recent decades. 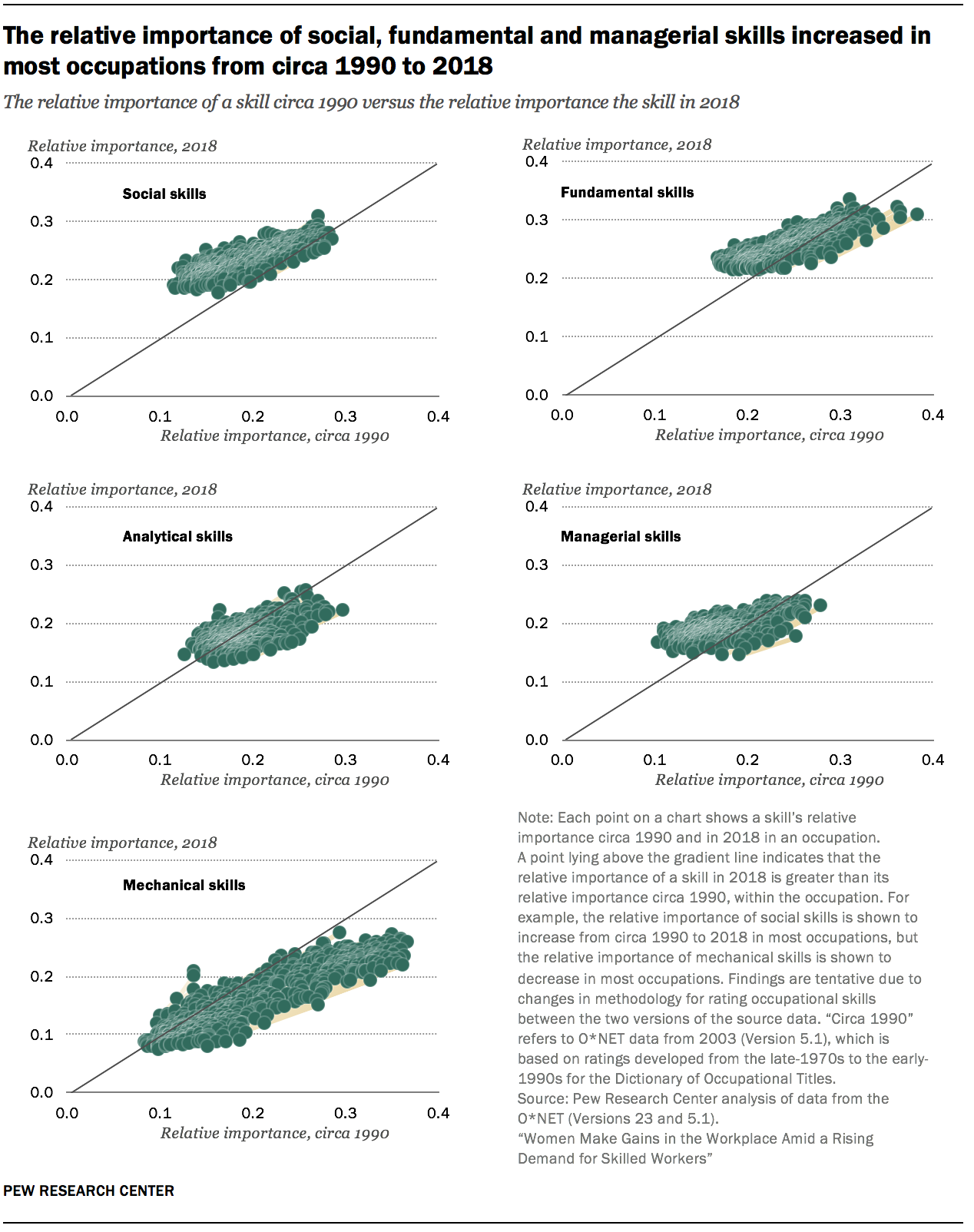 These findings should be treated with caution, however. A definitive conclusion is made difficult by the lack of data that is fully comparable over time. O*NET data using the current schematic for job skills was first released in 2003. The ratings in the 2003 dataset are based on evaluations conducted under the predecessor to the O*NET, the Dictionary of Occupational Titles (DOT). The implicit advantage is that DOT evaluations were conducted from the late 1970s through the early 1990s and yield a longer frame of reference for changes in ratings over time. However, changes in methodology between the DOT and the O*NET confound the comparisons to some degree: The ratings for any given skill for an occupation may have drifted upward or downward with the change in methodology. Focusing on the relative importance of skills corrects for any drift in the ratings that is shared among the five skill groups.25

The skills profiles of newer occupations listed in the O*NET point to a rising need for analytical skills in the near future. Starting in 2010, O*NET data listed 147 occupations as “new and emerging,” reflecting the changes driven by modern-day technologies.26 These jobs, such as database architects, informatics nurse specialists and video game designers, often call for greater proficiency in analytical skills, ranging from programming to science to systems analysis and evaluation.

This impression is confirmed by a comparison of the importance ratings for skills in new jobs with the ratings in older jobs in 2018, this time without the worry of changing methodology.27 The biggest difference between new and existing jobs is in their average rating for analytical skills, 2.7 vs. 2.2, or a difference of 21% in favor of new jobs, pointing to a sharper rise in the need for analytical skills in the future compared with the change in past decades.

Other differences in skills between new and older jobs in 2018 are consistent with the trends noted above with respect to changes in skill ratings from the 1980s to 2018. The average rating of social skills in new jobs is 3.1, 7% greater than the rating for social skills in existing jobs. The ratings for fundamental and managerial skills are both 10% higher in new jobs, while the difference in mechanical skills points to potentially a downward drift in the future.28

Social and fundamental skills retain their place at the top 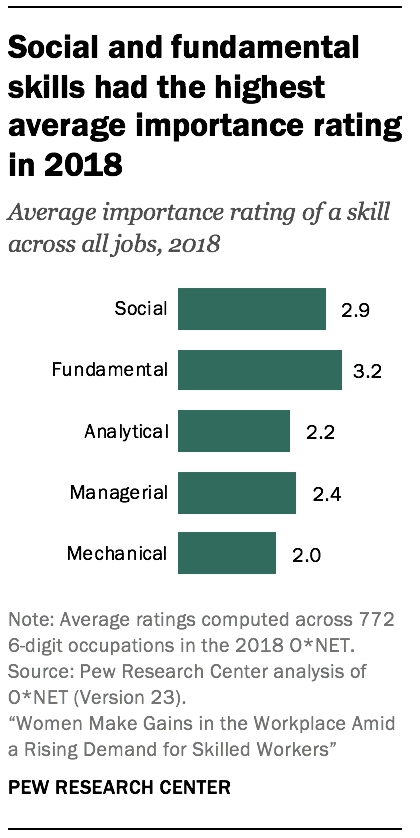 The five skill groups analyzed in this report are comprised of 35 detailed skills. As listed in the overview, fundamental skills encompass eight finer skills, and four of these skills – active listening, speaking, critical thinking and reading comprehension – appeared at the top of the importance ratings in 2018, with an average rating of 3.4 or higher. Rounding out the list of the top 10 finer skills are two more fundamental skills (judgment and decision making and writing), three social skills (monitoring, social perceptiveness and coordination) and one analytical skill (complex problem solving).29

Looking just below the top 10, one fundamental skill (active learning), three social skills (service orientation, instructing and persuasion) and one managerial skill (time management) complete the list of the top 15 most highly rated skills in 2018. Mechanical skills, such as equipment maintenance, equipment selection, repairing, and installation, are among the lowest rated of the 35 skills in 2018. So too are some analytical skills, such as technology design and programming.

Among occupations that are top-rung users of skills, the need for social and fundamental skills typically exceeds the need for other skills