The American workplace has seen a rising need for high-skill workers in recent decades. This report examines the impact of the changing landscape for job skills on gender disparities in the U.S. labor market.

The analysis is based on job skills and preparation data from the U.S. Department of Labor’s Occupational Information Network (O*NET), specifically Version 23, released August 2018, and Version 5.1, released November 2003. O*NET analysts rate the importance of 35 skills related to job performance in individual occupations. For the purposes of this analysis, we grouped these into five major families of job skills: social, fundamental, analytical, managerial and mechanical. Occupations were then assigned to one of four skill tiers based on the importance rating of each of the five major skills, ranging from least important to most important.

Examples of occupations in which each of the five skills is most important, or is in greatest need, in 2018 are as follows: social skills – sales managers; fundamental skills – lawyers; analytical skills – physicists; managerial skills – chief executives; and mechanical skills – industrial machinery mechanics. Occupational employment and wage data are from the Current Population Survey (CPS). For more information about the analysis, see the methodology section of this report.

Employers in the United States are increasingly in pursuit of workers who are adept in social skills, like negotiation and persuasion, and have a strong grounding in fundamental skills, such as critical thinking and writing. In the past nearly four decades, employment in the U.S. has expanded most rapidly in jobs in which these skill sets are most valued. Jobs attaching greater importance to analytical skills, such as science, mathematics and programming, are also hiring workers at a brisk pace.1 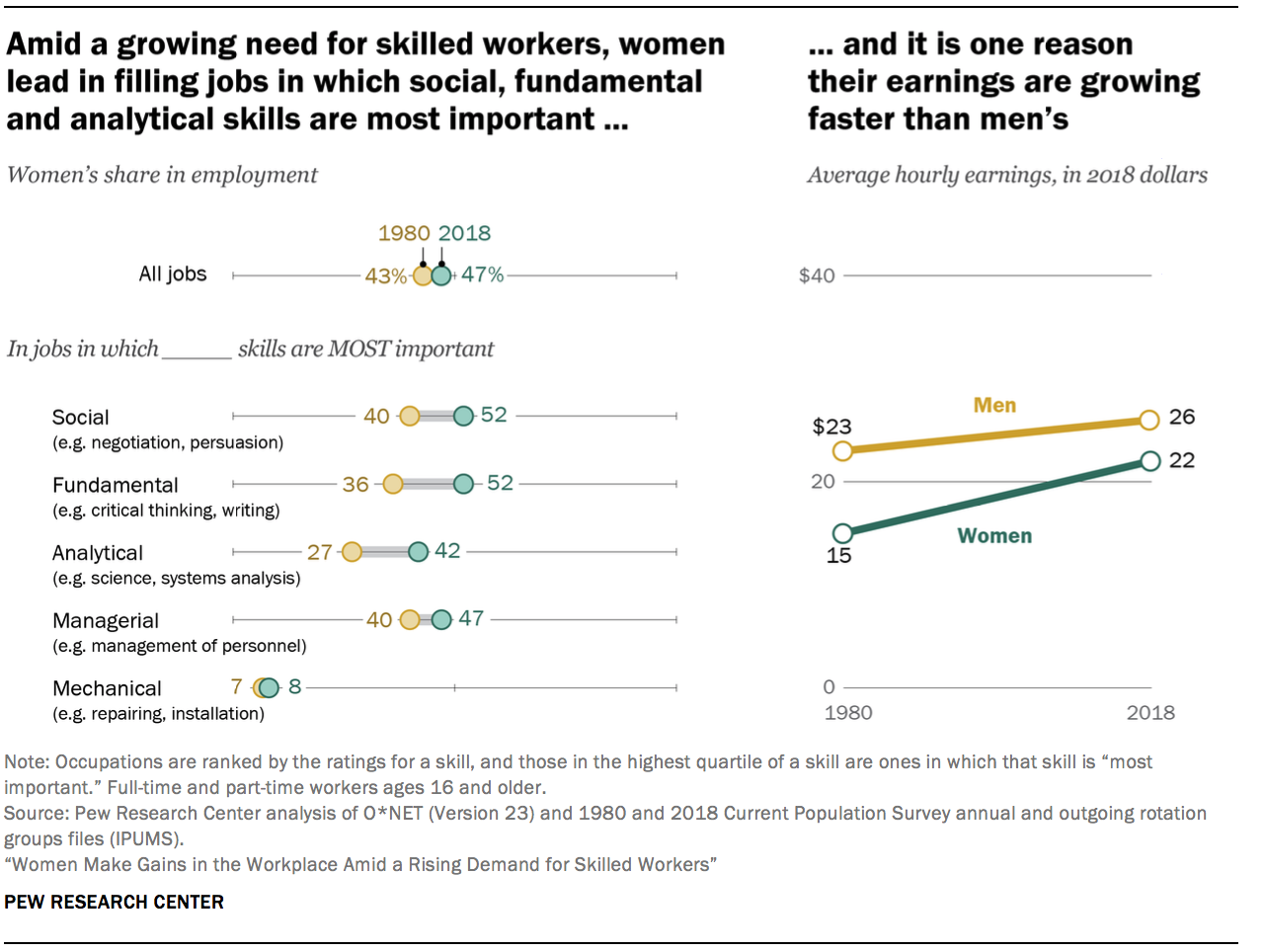 The importance of a skill refers to its rating on a scale from one (not important) to five (extremely important). A rating of three means the skill is considered important for work performance in an occupation. The source data on occupational information, the Occupational Information Network (O*NET), provides ratings for 35 skills in individual occupations. We grouped these skills into five major categories for the analysis in this report: social, fundamental, analytical, managerial and mechanical.

The terms “occupation” and “job” are used interchangeably in the report, as are the terms “earnings” and “wages.”

Women are in the vanguard of meeting these challenges. Not only have women been entering the labor force in greater numbers than men since 1980, they have made their presence felt more strongly in jobs with the greatest reliance on these types of skills.

Presently, women are in the majority in jobs that draw most heavily on either social or fundamental skills – such as legal, teaching and counseling occupations – accounting for 52% of employment in these jobs in 2018 (up from roughly 40% in 1980). The share of women has also risen greatly among those working in occupations that rely most on analytical skills – such as accounting and dentistry – from 27% in 1980 to 42% in 2018, according to a new Pew Research Center analysis of government data.

Skill groups and the occupations with the greatest need for them

The 35 skills whose importance is rated in O*NET are grouped into five major families of job skills as follows:

Examples of occupations with among the greatest need for these skill groups are as follows:

The growing presence of women in higher-skill occupations has contributed to more rapid wage growth for them in recent decades compared with men, and this helped to narrow the gender wage gap. From 1980 to 2018, the average hourly wage of women increased 45%, from $15 to $22, compared with an increase of 14% for men, from $23 to $26 (wages expressed in 2018 dollars).2 Thus, the earnings of women as a ratio of the earnings of men increased from 0.67 to 0.85, a narrowing of the gender wage gap from 33 cents to the dollar in 1980 to 15 cents to the dollar in 2018.

The increase in wages for women has been sharper in jobs calling for greater prowess in skills. For instance, women’s earnings increased by 58% from 1980 to 2018 in jobs placing the greatest emphasis on analytical skills. The gender wage gap narrowed from 32 to 12 cents to the dollar in those jobs. This was due in part to a rapid rise in college completion among women working in high-skill jobs.

The ongoing presence of a gender wage gap, albeit narrower, is attributed to a variety of factors by scholars. Some of these factors, such as job skills, education level, work experience, union membership, hours worked, industry and occupation are measurable.3 Others such as discrimination, differences in professional networks, and responsibilities associated with motherhood and caregiving are difficult to measure.

Women currently hold an edge over men in certain skills and in schooling: They are more likely to hold jobs in which fundamental and social skills are more important, and a greater share of women than men have graduated from college.4 The analysis in this report estimates that women’s edge in high fundamental- and social-skill jobs and college education raised their earnings by 4 cents to the dollar in 2018 when compared with men’s earnings.5 This means that if women were to lose their lead in skills and education, the gender wage gap would widen from 15 cents to the dollar to 19 cents to the dollar.

These findings are based on an analysis of the Occupational Information Network (O*NET), a database of occupational information developed under the sponsorship of the U.S. Department of Labor. The analysis in this report relies on O*NET ratings of the importance of 35 skills in individual occupations. These skills represent workers’ attributes related to work performance and are grouped into five major categories for the purposes of this analysis: social, fundamental, analytical, managerial and mechanical (see text box).6 Employment and earnings estimates are derived from the Current Population Survey (CPS), a monthly survey conducted jointly by the U.S. Census Bureau and the Bureau of Labor Statistics. Among the report’s other key findings: 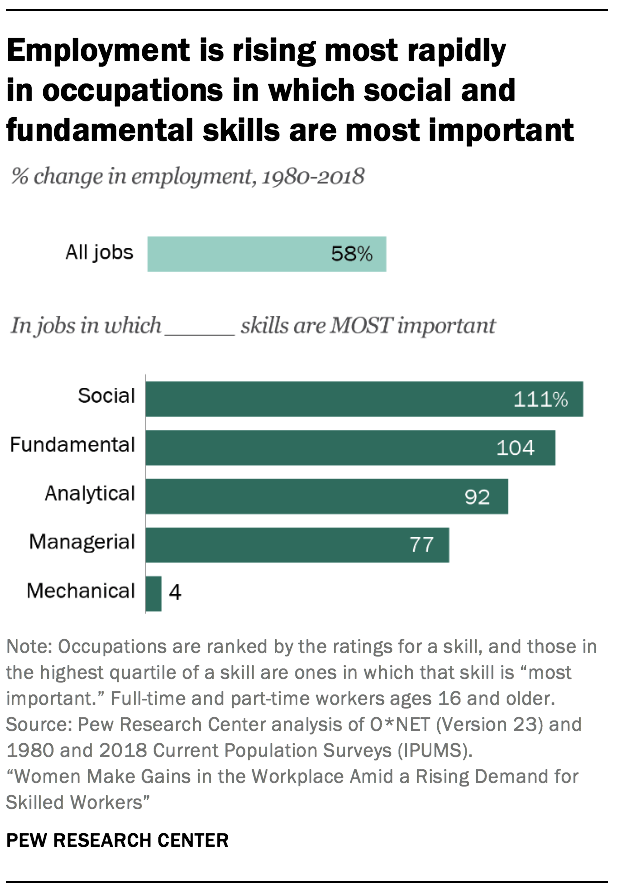 Not only are women gaining greater representation in jobs that are most demanding of social and fundamental skills, but employment in those jobs is growing rapidly. From 1980 to 2018, overall employment more than doubled in jobs where social and fundamental skills are most important, by 111% and 104%, respectively. Employment in jobs most in need of analytical skills increased nearly as sharply (92%), compared with an increase of 58% in employment overall. 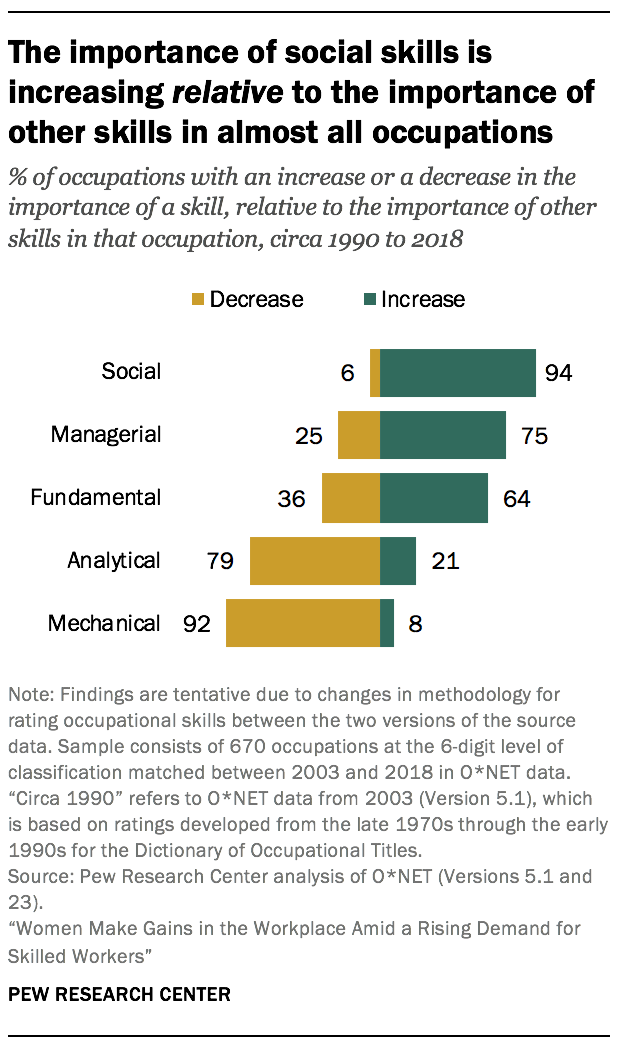 Although the relative importance of analytical skills increased in only about one-in-five long-standing occupations, the profiles of newer occupations emerging in today’s knowledge-based economy illustrate a growing need for specific analytical skills. Jobs such as database architects, informatics nurse specialists and video game designers represent a new class of occupations that rely more heavily on programming, science, systems analysis and evaluation, and technology design skills – all elements of the general class of so-called STEM skills.8 On the other hand, demand for mechanical skills, such as repairing, troubleshooting and equipment maintenance, is on the wane.9

Measuring the need for skills in the workplace

The analysis of job skills in this report is based on the U.S. Department of Labor-sponsored Occupational Information Network (O*NET), a database spanning more than 950 occupations. Each occupation is rated on a variety of dimensions, including the importance of 35 skills representing workers’ attributes related to work performance. More specifically, O*NET analysts assign a numerical rating to the importance of each skill, from one (not important) to five (extremely important).

Grouping occupations by the importance of a skill

The analysis is based principally on O*NET data from 2018 (Version 23) and 2003 (Version 5.1). The 2003 dataset contains ratings based on data collected from the late 1970s through the early 1990s for the Dictionary of Occupational Titles (DOT), the predecessor to O*NET. The ratings from the DOT are based on a different methodology than currently used in O*NET and comparisons of skill ratings over time should be treated with appropriate caution. Employment and earnings estimates are derived from the Current Population Survey (CPS), sourced from IPUMS. See Methodology for details. 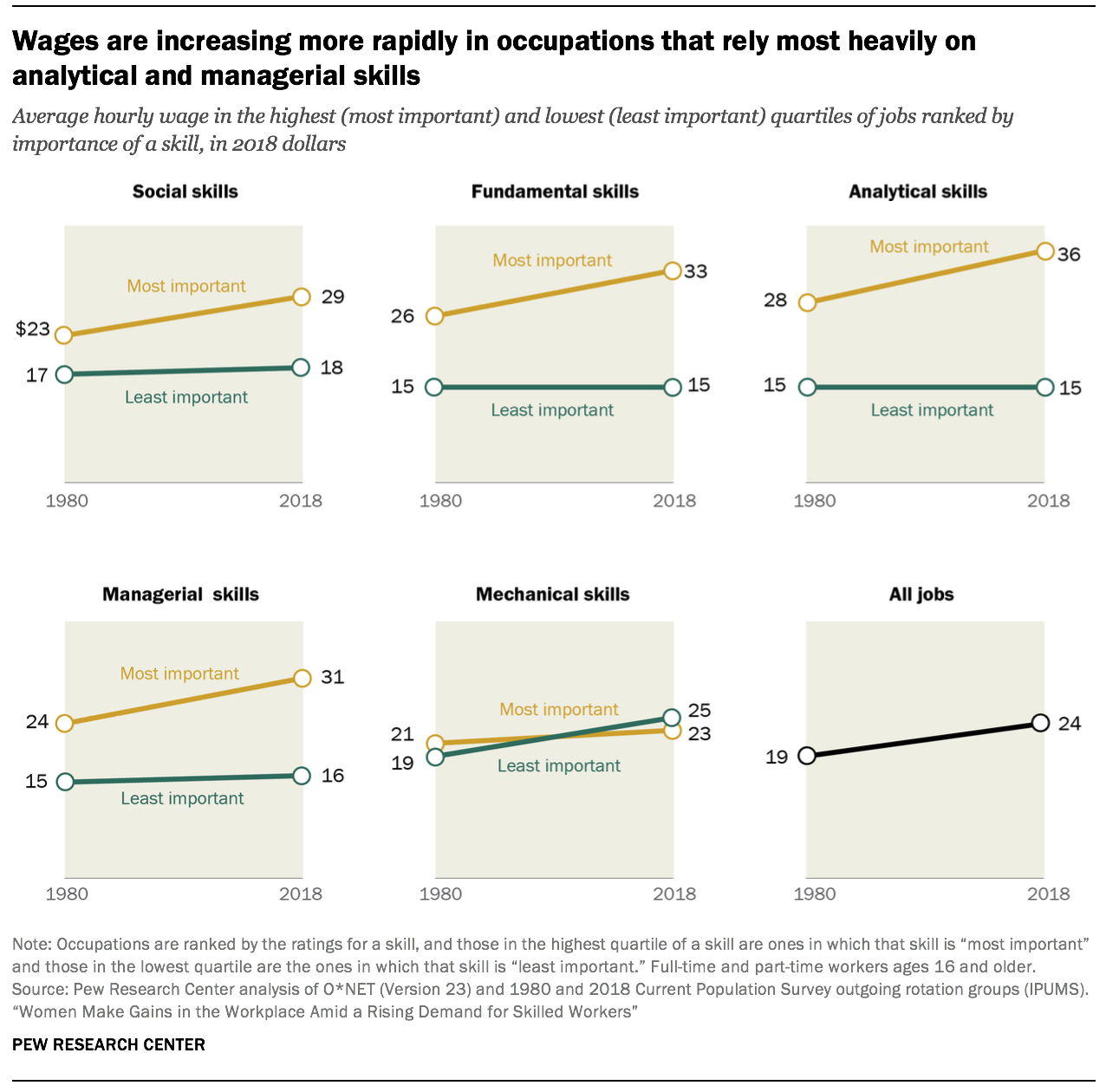 A reason for this pattern in wages is that social, fundamental, analytical and managerial skills reinforce and complement each other, pushing wages higher or lower in tandem. But mechanical skills and nonmechanical skills move in opposition. Thus, a job with a limited need for mechanical skills, such as human resource managers, can be a high-wage job because it calls for greater competence in other skills.

Wages are rising faster in jobs that rely more on nonmechanical skills. From 1980 to 2018, wage growth ranged from 24% in jobs in which social skills are most important to 29% in jobs in which managerial and analytical skills are most important. Meanwhile, wages in jobs least in need of these nonmechanical skills were either stagnant or barely changed from 1980 to 2018. Overall, rising employment in higher-skill jobs and rising wages in those jobs affirm the growing demand for workers more practiced in social, fundamental, managerial and analytical skills.

The more rapid increase in the wages of workers nimble in nonmechanical skills also sheds light on a related phenomenon – the growing gap in wages between the most and least educated. Jobs in which nonmechanical skills are most important mainly employ workers with four years of college or higher levels of education. As employment has shifted in the direction of these jobs,10 a rising share of American workers, women especially, have benefited from this trend, at least to some extent by acquiring more schooling.11 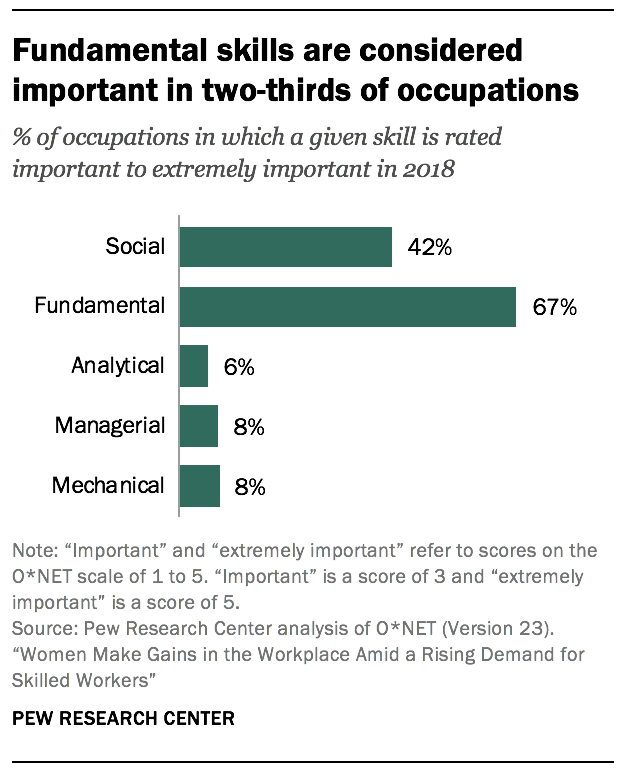 The need for proficiency in social and fundamental skills is widespread across occupations. A direct examination of the skill ratings in the O*NET reveals the ubiquity of social and basic skills among jobs today. As of 2018, fundamental skills were rated “important” to “extremely important” for work performance by O*NET analysts in about seven-in-ten occupations.12 Social skills were rated similarly important in about four-in-ten occupations. This breadth of demand across occupations was much greater than the comparable scope for analytical, managerial and mechanical skills, which are more likely to be rated “somewhat important” or “not important” by O*NET analysts.

The growing demand for high-skill workers – and the changing skills requirements within occupations – is not lost on Americans. A new Pew Research Center survey finds that 51% of adults who are in the labor force say it will be essential for them to get training and develop new skills throughout their work life in order to keep up with changes in the workplace.13

Next: 1. Employment is rising most rapidly in jobs most in need of social, fundamental and analytical skills
← Prev Page
You are reading page1Page2Page3Page4Page5Page6Page7
Next Page →

Women Make Gains in the Workplace Amid a Rising Demand for Skilled Workers
1. Employment is rising most rapidly in jobs most in need of social, fundamental and analytical skills 2. Women’s lead in skills and education is helping narrow the gender wage gap 3. In a technology-driven era, social and fundamental skills still reign supreme within occupations Acknowledgments Methodology Appendix