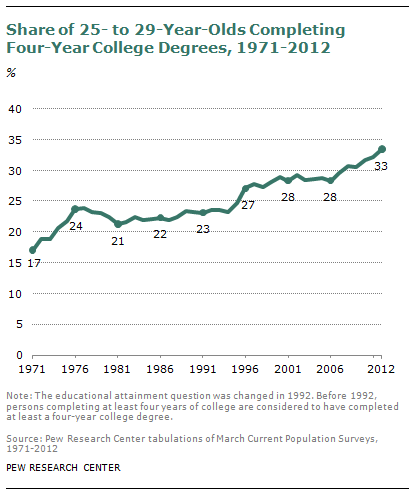 Record levels of bachelor’s degree attainment in 2012 are apparent for most basic demographic groups.

The Public’s Views on the Importance of Higher Education 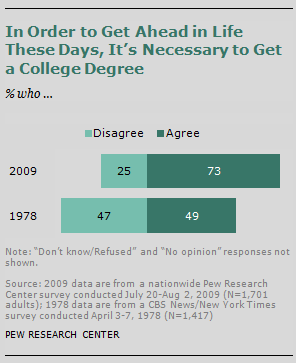 In spite of these trends, the public remains of two minds about the value of college. On the one hand, strong majorities say a college education is important. On the other hand, many question the value of college given the rising costs. In a March 2011 Pew Research survey, 57% of adults said the higher education system in the U.S. fails to provide students with good value for the money they and their families spend. 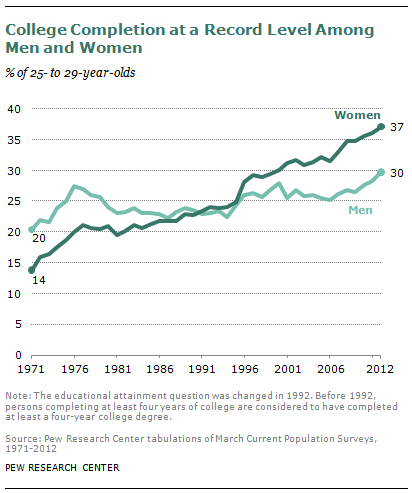 By contrast, women’s educational levels have grown steadily over the past 40 years and by 2012 reached their highest level at 37% completing at least a bachelor’s degree.

By Race and Ethnicity 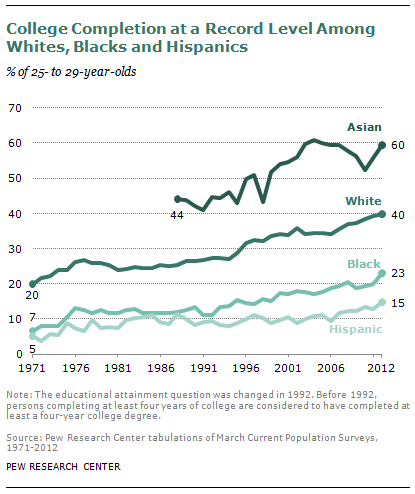 Blacks and Hispanics, on average, have lower levels of college attainment. The Hispanic population, in particular, is a growing share of the population. In March 1988 more than three-quarters of adults ages 25 to 29 were white or Asian. By March 2012 the share of adults ages 25 to 29 that was white or Asian was less than two-thirds. Absent increases in educational attainment within racial and ethnic groups, this “demographic headwind” would be expected to dampen further increases in educational attainment. But the envisioned plateau or decline in the overall attainment of the nation’s young adults has not materialized in part because collegiate attainment has increased among black and Hispanic young adults. 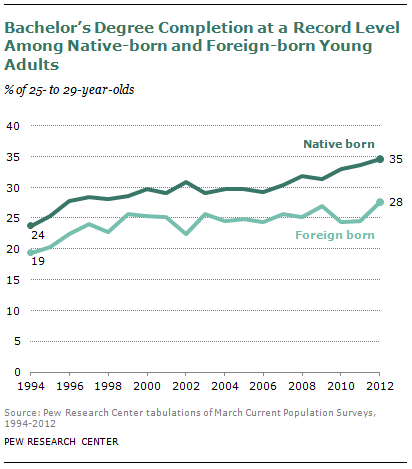 Trends in bachelor’s degree attainment by nativity are available back to 1994. Among native-born 25- to 29-year-olds, collegiate attainment reached a record high in 2012 (35%). Among immigrant young adults, a record 28% have at least finished a bachelor’s degree in 2012, eclipsing the prior high of 27% observed in 2009. Some of the increase in the educational attainment of foreign-born 25- to 29-year-olds may reflect changes in the source countries of recent immigrants to the United States. Immigrants from Asia have recently eclipsed Hispanic immigrants as the largest source of new immigrants to the United States (Pew Research Center, 2012).