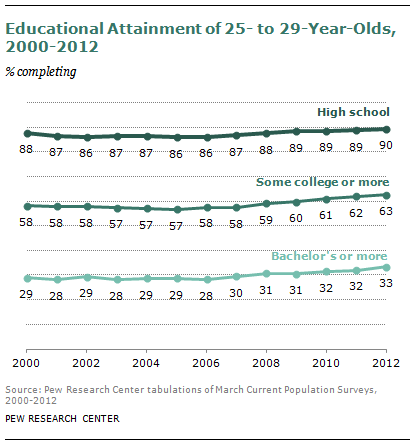 Record shares of young adults are completing high school, going to college and finishing college, according to a Pew Research Center analysis of newly available census data. In 2012, for the first time ever, one-third of the nation’s 25- to 29-year-olds have completed at least a bachelor’s degree.

These across-the-board increases have occurred despite dramatic immigration-driven changes in the racial and ethnic composition of college-age young adults, a trend that had led some experts to expect a decline in educational attainment.

College completion is now at record levels among key demographic groups: men and women; blacks, whites and Hispanics; and foreign-born and native-born Americans.

Also, a record share of the nation’s young adults ages 25 to 29 (90%) has finished at least a high school education. And another record share—63%—has completed at least some college.

Some of the “credit” for recent increases appears to go to the Great Recession of 2007-2009 and the sluggish jobs recovery since. With young adults facing sharply diminished labor market opportunities, their rate of high school and college completion has been rising slowly but steadily since 2007, after having been stagnant during better economic times earlier in the decade.

Changing public attitudes about the importance of going to college to succeed in an increasingly knowledge-based labor market may also have played a role. In 1978, the public was evenly divided over whether a college education was necessary to get ahead in life. Roughly 30 years later, a lopsided majority firmly endorsed the necessity of a college degree. In a 2009 Pew Research Center survey, 73% of American adults agreed that, in order to get ahead in life these days, it is necessary to get a college education. Similarly, when the Gallup Organization asked about the importance of college in 2010, 75% of Americans said a college education is “very important.” In 1978, only 36% said the same.

The nation’s college-age population is becoming more racially and ethnically diverse – today some 44% of 18- to 25-year-olds are non-white, up from 17% in 1971. Historically, Hispanic and black youths have trailed white and Asian youths in educational attainment. That remains the case, but rates for all four groups are rising at a similar pace.

That same survey also found that college presidents are concerned about the quality, preparedness and study habits of today’s college students. Overall, 52% of presidents say college students today study less than their predecessors did a decade ago; just 7% say they study more.

Race/Ethnicity: Hispanics are of any race. Whites, blacks and Asians include only non-Hispanics. In order to have a consistent series on Asian educational attainment, Asian refers to those of Asian or Pacific Islander origin.

Next: Section 1: Overall Educational Attainment
← Prev Page
You are reading page1Page2Page3Page4Page5Page6Page7
Next Page →