In terms of both high school completion and bachelor’s degree completion, today’s young adults are outpacing earlier generations of young adults. Educational attainment has continued to increase, although the gains are not as large as they were in the first half of the 20th century (Goldin and Katz, 2008). In recent years, some analysts have argued that educational gains among young adults had actually stalled, resulting in an “education reversal,” i.e., that older Americans are more educated than younger Americans (Evans and Breznau, 2010).

As evidence for the “education reversal,” scholars pointed to data from 2007 and compared the educational attainment of adults across age groups. As the table below shows, in 2007 29.9% of adults ages 45 to 64 had finished at least a bachelor’s degree. In comparison, 29.6% of 25- to 29-year-olds had finished at least a bachelor’s degree. A similar “education reversal” was apparent in 2007 in regard to high school attainment; 88.1% of the older age group had finished high school compared with 87% of young adults.

The 2012 data suggest that recent developments have reversed the “education reversal.” Young adults are better educated than they were in 2007. In 2012 33.5% of young adults had at least attained a bachelor’s degree in comparison with 30.9% of 45- to 64-year-olds. Similar gains in high school attainment have occurred since 2007. So the “education reversal” that arose in the first decade of the 2000s has vanished or been reversed by recent improvements in the educational attainment of young adults. 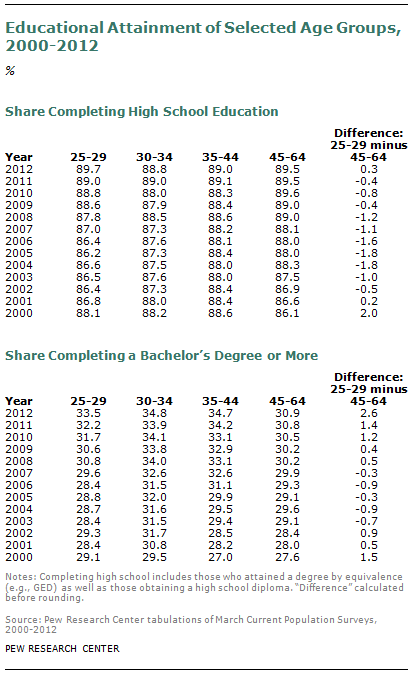 In 2007 29.9% of adults ages 45 to 64 had at least finished a bachelor’s degree. But that does not mean that roughly 30% of these older Americans had finished college back when they were 25 to 29 years of age. What has happened to this age group as it aged from 25-29 to 45-64? Ignoring momentarily educational change, there have been demographic changes. Some of the 25- to 29-year-olds from earlier decades have died, and those that have died tended to be less educated. In addition, as the 25- to 29-year-olds age their ranks are changed by arriving immigrants, and the new immigrants likely have a different education profile than the native population. Finally, in addition to demographic change, there is also educational change in that educational attainment tends to increase as a group ages. Although we often assume that most formal education is completed by age 30, this is not always a safe assumption. “Educational attainment has ceased to be fixed in early adulthood, especially among members of ethnic and racial minorities” (Day and Bauman, 2000).

Next: References
← Prev Page
Page1Page2Page3Page4Page5You are reading page6Page7
Next Page →