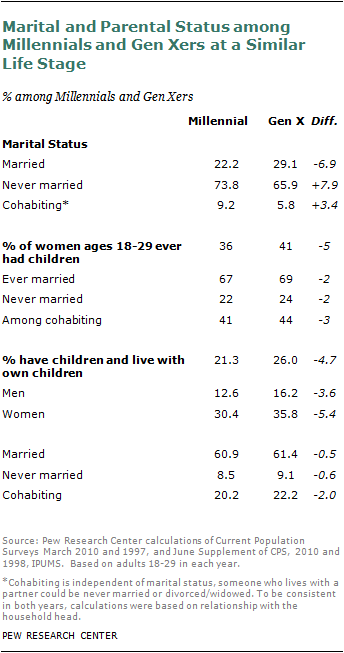 As the youngest generation of adults, today’s 18-29 year olds are continuing to push the frontiers of these behavioral changes. Indeed, a comparison between Millennials today and Gen Xers back when they were the age Millennnials are now shows that a significant degree of change has occurred just in the past decade and a half. 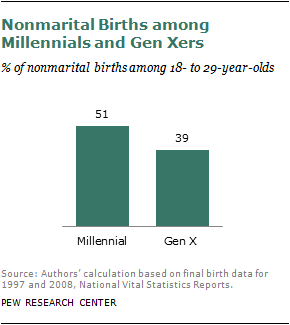 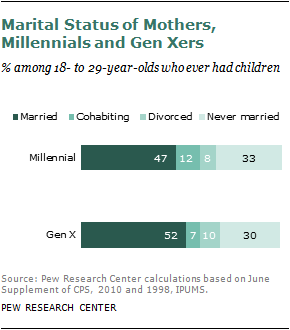 The incidence of parenthood among young adults has also declined. Just over a quarter of Gen Xers (26%) had children and were living with their children when they were 18 to 29 years old, compared with 21% of Millennials in 2010. Now, as then, there is a sharp gender difference on this measure.

At the same time, today’s young women are less likely to be mothers than were young women nearly a decade and a half ago. The share of women ages 18-29 who have ever had children has declined from 41% in 1998 to 36% in 2010; this decline has occurred regardless of the marital status of the young women.

Despite the drop of fertility rate among young adults, the share of nonmarital births has increased. Slightly more than half (51%) of the births among Millennials in 2008 were to unwed mothers. Looking back at Gen Xers about a decade ago in 1997, the rate of birth to unwed mothers was about four-in-ten (39%).

Consistent with these trends, young mothers today are more likely than those in the past to be unmarried. Fewer than half (47%) of Millennial mothers are currently married, about one-in-ten (12%) live with a partner and more than three-in-ten (33%) have never married. In 1998, when Gen Xers mothers were 18 to 29, 52% of them were married, 7% were cohabiting, and 30% had never married. 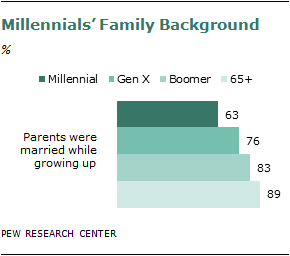 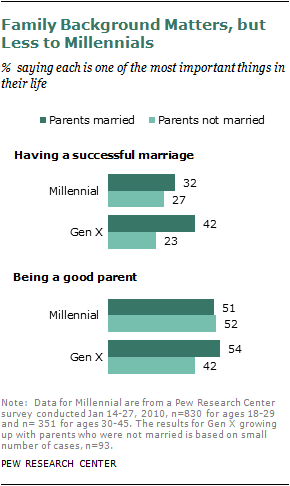 Does parental marital status affect one’s outlook on marriage and family? To the extent that there are correlations in the survey data, they are more pronounced among Gen Xers than among Millennials.

Family and RelationshipsGenerations and AgeParenthoodMarriage and DivorceMillennialsTeens and Youth
Defining generations: Where Millennials end and Generation Z begins
Quiz: Are you a Core Conservative? A Solid Liberal? Or somewhere in between?
Key findings about U.S. immigrants
About One-in-Four U.S. Hispanics Have Heard of Latinx, but Just 3% Use It
Views on Race in America