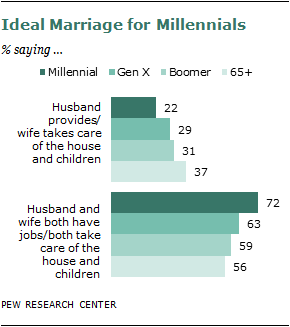 Asked what kind of marriage leads to the more satisfying way of life, most Millennials (72%) choose the modern egalitarian model (in which the husband and wife both have jobs and both take care of the household and children) over the traditional male breadwinner/female homemaker model (22%). Older adults also prefer the modern model, but not by the same lopsided margins.

There are gender differences among Millennials on this question; young women are more likely than young men to choose the egalitarian model (78% vs. 67%). There are similar gender gaps on this question among Boomers and member of the Silent Generation—but not among Gen Xers. 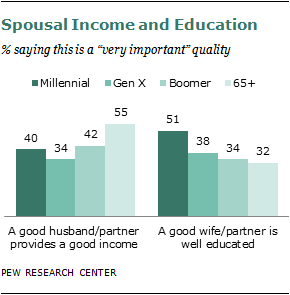 What makes a good marriage partner? On this question, attitudes are similar across the generations.4 Being a good parent, being caring and compassionate, and putting one’s family before anything else are the top three qualities valued by adults of all ages.

Some generational differences emerge when it comes to rating other qualities. More than half (51%) of Millennials say it is very important for a wife or partner to be well educated, a view shared by fewer than four-in-ten Gen Xers, Boomers and Silent Generation adults. Also, more than half (55%) of adults 65 and older think it is very important for a good husband/partner to provide a good income, a view shared by just 40% of Millennials and similar shares of Gen Xers and Boomers.

What do Millennial men say about an ideal wife or partner? The top two qualities they value are being a good mother (93%) and being caring and compassionate (88%). The next is putting her family before anything else (74%). More than half of young men think being a good sexual partner (57%) and being well educated (52%) are very important qualities for a good wife. “Providing a good income” is at the bottom of the list; just 15% of young men think it is very important for a good wife to have that quality. 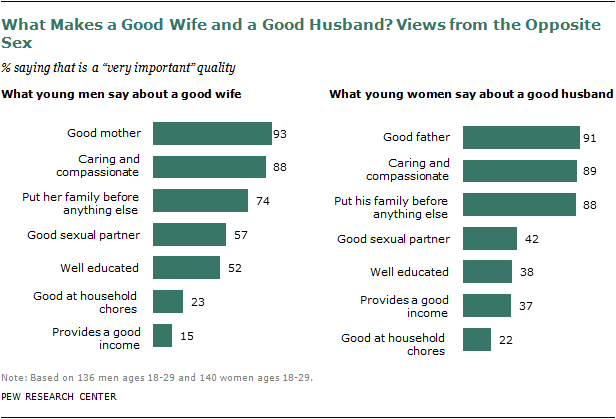 What do Millennial women say about an ideal husband or partner? Compared with young men, young women focus more on the top three qualities: being a good father (91%), being caring and compassionate (89%), and putting his family before anything else (88%). The rest of the qualities tested in the survey, such as being a good sexual partner, being well educated and providing a good income, are not viewed as important. Fewer than half of 18- to 29-year-old women think these are very important qualities for a good husband. “Good at household chores” comes at the bottom of the list, with about one-in-five (22%) of young women saying that it is a very important quality for a good husband or partner.

Being Married vs. Being Single 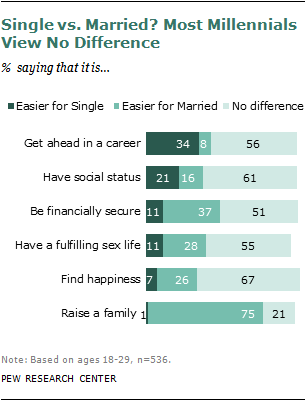 The survey asked respondents to rate whether it is easier for a single person or a married person to achieve six goals in life, such as finding happiness and getting ahead in a career.

On the other goals, most Millennials think it doesn’t make a difference whether a person is married or single. For example, 67% of Millennials say that happiness is not related to whether you are single or married, and 61% say that social status is irrelevant to marital status.

Among the minority who say marital status does make a difference, married life is seen as being preferable to being single when it comes to being financially secure, having a fulfilling sex life and finding happiness. On the flip side of the coin, the single life is seen as making it easier for someone to get ahead in a career. Also, slightly more Millennials think it is easier for a single person to have social status (21%) than a married person (16%), but this difference is not statistically significant.

Millennials are more likely than older generations to say that it is easier for a single person to get ahead in a career and have social status, but their assessments are similar to those of older generations in such areas as being financially secure, raising a family and finding happiness. 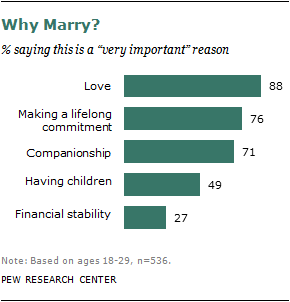 What are the reasons to be married or to get married? From a list of reasons offered in the survey questionnaire, nearly nine-in-ten (88%) young adults say love is very important, followed by making a lifelong commitment (76%) and companionship (71%).

Which Gender Needs to Be a Provider? 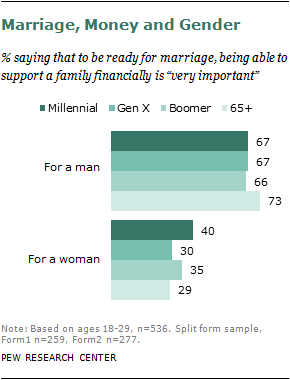 Asked how important it is for a man to be able to support a family financially if he wants to get married, 67% of Millennials say it is “very important.” But when the same question is asked about a woman, only 40% say it is very important. Young men and women agree on these views.

The view that it is important for a man to be able to support a family financially is shared across all generations. There are small differences between Millennials and older generations on rating women’s earning power, although in most cases, they fall short of statistical significance. We do not know what Gen Xers or Boomers thought of this issue when they were at Millennials’ age.