The number of countries and territories where religious groups experienced harassment by governments and social groups reached 190 (out of 198 analyzed) in 2019, a higher number than in any other year of the study. This figure is up from 185 in 2018. 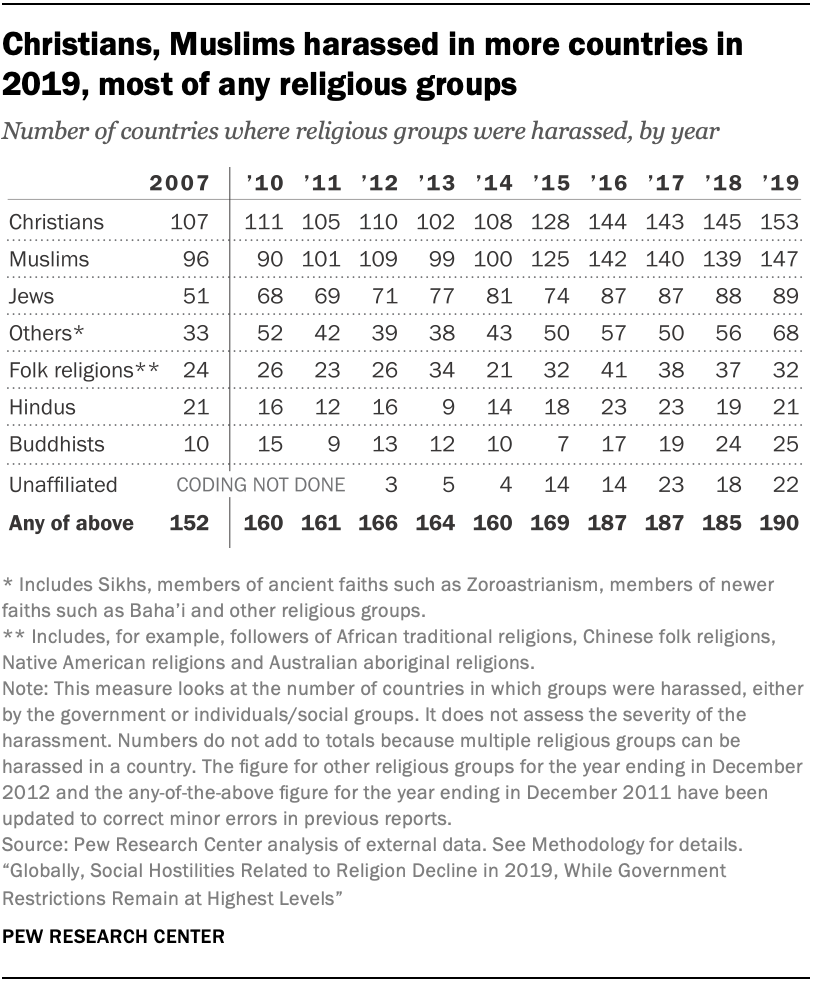 The harassment measured in the study includes a wide variety of actions – from derogatory statements by government officials to physical acts of force such as property damage, detentions, displacements from homes, assaults and killings – that target groups or individuals at least in part because of their religion. Harassment directed against those who are religiously unaffiliated, including atheists, agnostics and humanists, also is captured by this study.

In 2019, harassment of Christians was reported in 153 countries, up from 145 countries in 2018. In Pakistan, for example, a Christian suspect in a theft case was tortured while in police custody and died a few hours after being released. The victim’s brother reported that one of the police officers who arrested the man said, “I know how to deal with these infidels.”37 In Cuba, meanwhile, there were multiple reports of state officials threatening Christian house church leaders for conducting religious activities.38

Muslims were harassed in 147 countries in 2019, up from 139 countries in 2018. In France, the Interior Ministry closed numerous Muslim-owned businesses, Islamic schools, Islamic cultural sites and mosques as the Secretary of State to the Minister of the Interior linked them to “political Islam.”39 And in South Africa, 80 Islamic graves were vandalized and rearranged to form the shape of a cross.40

Jews faced harassment in more countries than any other religious groups besides Christians and Muslims, despite their relatively small population size. (Jewish people make up just 0.2% of the world’s population.) In 2019, Jews were harassed in 89 countries – a slight uptick from 88 countries in 2018. One such incident occurred in Argentina, where a prominent rabbi was seriously injured during a home invasion in which his attackers physically assaulted him, robbed him and said they knew he was a rabbi.41

Hindus were harassed in 21 countries in 2019 – up from 19 countries the previous year. In Bangladesh, for instance, rioters ransacked a Hindu temple after two Muslims were arrested for allegedly hacking the Facebook account of a Hindu man and posting material disparaging Islam on his account.42

Buddhists experienced a small increase in the number of countries where they faced harassment, from 24 in 2018 to 25 in 2019 – the highest total for this religious group since the study began in 2007. In Austria, for example, the construction site of a Buddhist shrine was vandalized with swastikas.43

Religiously unaffiliated people (including atheists, agnostics and people who don’t identify with any religion) were harassed in 22 countries in 2019, up from 18 the previous year. In Saudi Arabia, the Presidency of State Security released a video on Twitter referring to atheism as “extremist.” A 2014 royal decree in the country punishes atheism with up to 20 years in prison, and in early 2019, the government criminalized “the promotion of atheistic ideologies in any form.”44

Most of the religious groups analyzed individually – Christians, Muslims, Hindus, Buddhists and the religiously unaffiliated – faced harassment in more countries from governments and public officials than from private actors, such as social groups or individuals.

Adherents of folk religions experienced government harassment in 20 countries and social harassment in 18 countries in 2019. In Canada, an Indigenous elder contended that airport security officials desecrated the contents of a pouch containing cedar, sage, sweet grass and tobacco, considered sacred by her tribe, by requiring her to open it for inspection in order to travel.45 And in the United States, an Indigenous tribe called the Ramapough Mountain Indians had an ongoing lawsuit in 2019 against the township of Mahwah, New Jersey, after the township limited their religious gatherings and ordered them to remove several religious structures, including an altar and prayer circle. (The U.S. Department of Justice later supported the tribe’s lawsuit against the town, and the parties eventually settled in June 2019.46)

Other religious groups beyond those analyzed individually – including Baha’is, Scientologists, Sikhs, Rastafarians and Zoroastrians, among others – faced government harassment in more than twice as many countries (59) as they faced social hostilities (24). In Kenya, for example, a public secondary school asked a Rastafarian student to shave her dreadlocks. The school had expelled the student the previous year for wearing them in a turban and had been ordered by a court to let her return. 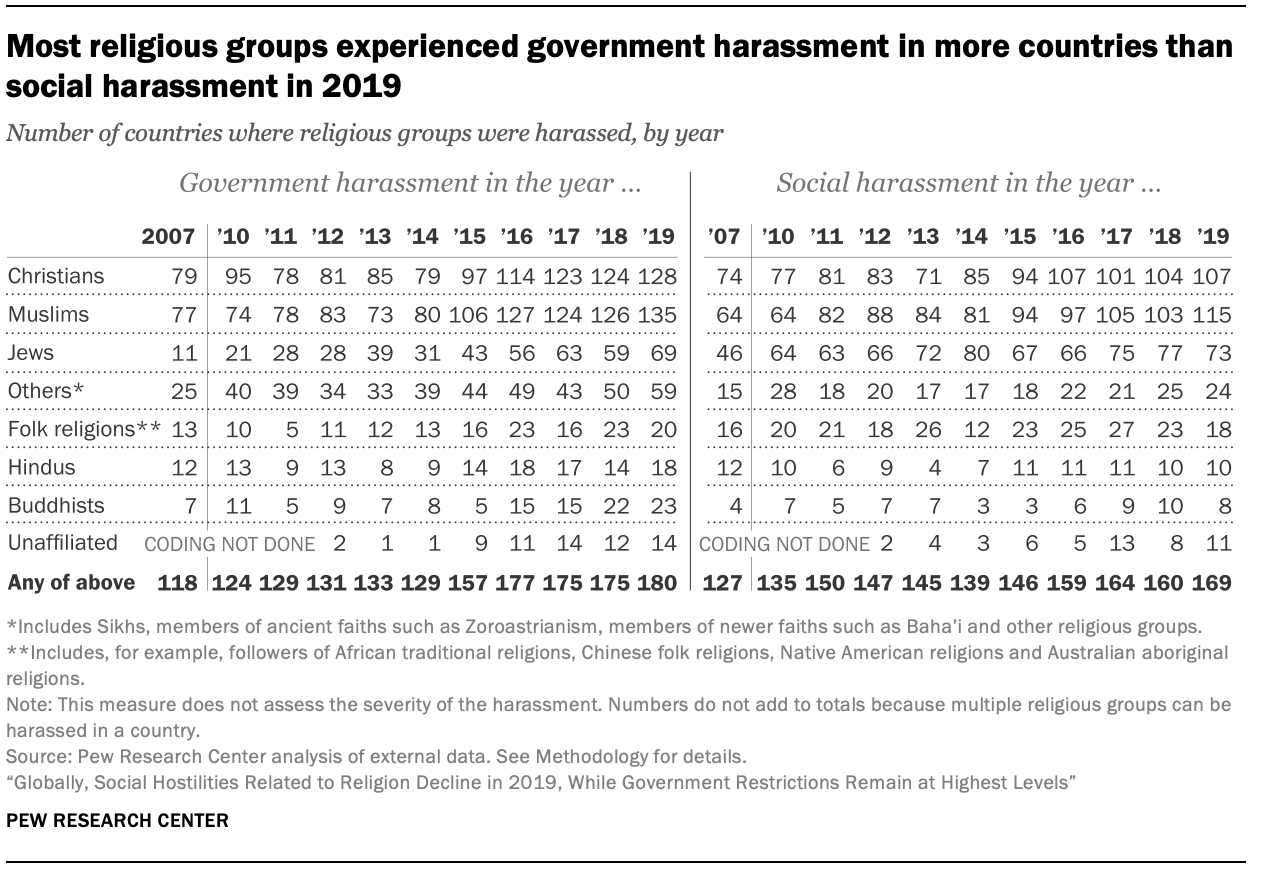 Harassment of Christians and Muslims by region

Across geographic regions, the shares of countries in which specific religious groups are harassed tend to vary.

The Middle East-North Africa region, for example, had the highest share of countries in 2019 where Christians were harassed. Of the 20 countries in the region, 19 had some form of harassment, either by governments or social groups, targeting Christians. Government harassment of Christians was reported in all 19 of these countries, while social harassment occurred in 15 countries, with both figures remaining stable since 2018.

Christians experienced government harassment in more countries than they did social harassment in every region included in the study.

Looking at both government harassment and social harassment, the share of countries where Muslims were harassed increased in 2019 in every region except in the Middle East and North Africa, where all 20 countries in the region recorded such harassment in both 2018 and 2019.

Types of physical harassment of religious groups by region

In the vast majority of countries around the world, at least one act of religion-related harassment is reported each year. To try to gauge the incidence of the most severe forms of harassment, this report looks separately at five types of harassment involving physical force or violence: property damage, detentions, displacement from homes, physical assaults and killings.

In 2019, social groups and individuals used at least one of these five forms of force against at least one religious group in 117 of the 198 countries and territories (59%) examined by the study.47 Governments employed the same types of physical harassment against religious groups in 96 countries (48%) during the same period.

Of the five types of physical harassment measured by the study, damage to property of religious groups (or motivated by religious bias) occurred in the highest number of countries throughout the world in 2019 – 117 out of 198 countries, or 59%. This includes 91 countries where damage was caused by social groups, 67 where it was caused by government actors, and 41 where both governments and private citizens damaged property belonging to religious groups.

In Europe, the sources reported property damage in 78% of the region’s countries, the largest share of the five regions. In Denmark, for instance, vandals desecrated more than 80 tombstones in a Jewish cemetery in the town of Randers on the 81st anniversary of Kristallnacht, the 1938 pogrom against Jews in Germany, as part of a series of incidents of vandalism targeting Jews across five Danish cities on the same evening.48 A similar, though slightly smaller, share of countries in the Middle East (75%) had incidents of religion-related property damage.

Physical assaults related to religion, including torture, took place in 80 countries, or 40% of all countries studied. Physical assaults perpetrated by individuals or social groups (including mobs) occurred in 60 countries, while assaults by government authorities occurred in 36 countries. Reports of assaults related to religion were most widespread in the Middle East and North Africa, where 12 of 20 countries in the region had such incidents (60%), followed by the Asia-Pacific region (25 of 50 countries). This measure includes incidents that range widely in severity, though none were fatal. 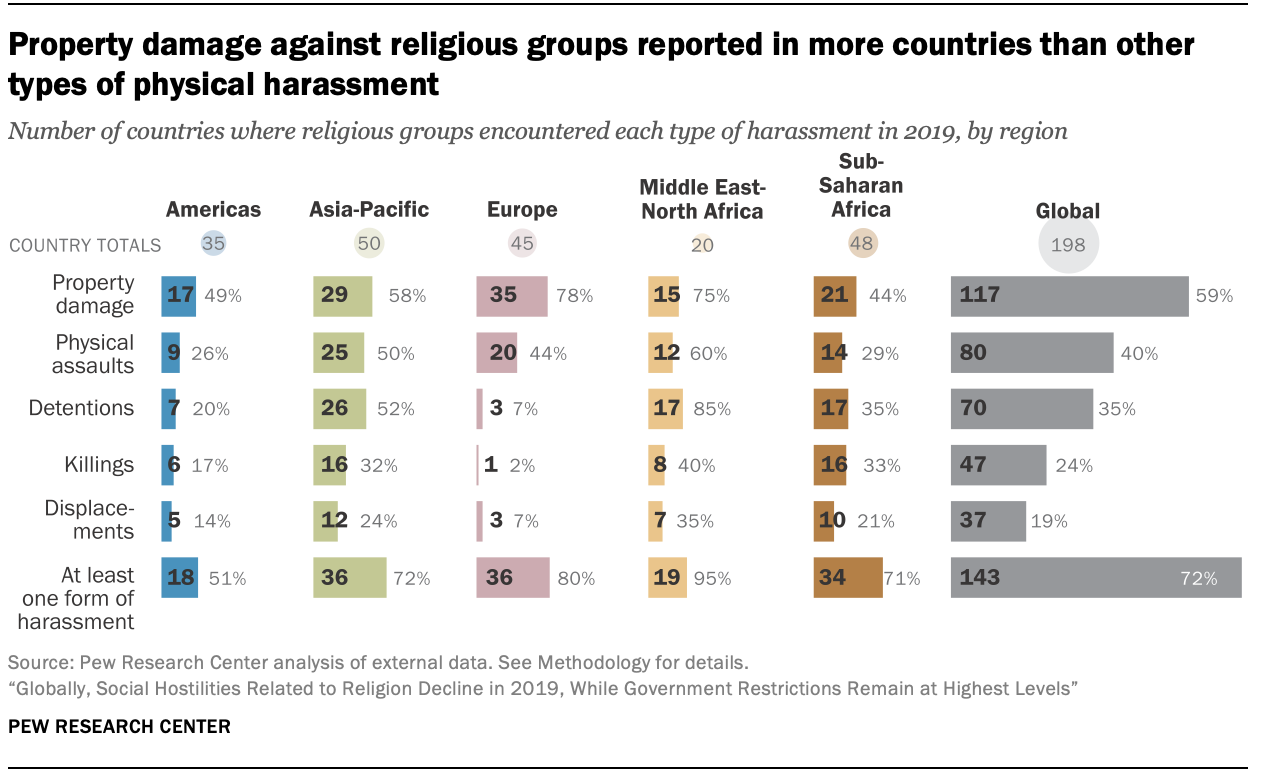 Meanwhile, 47 countries had at least one instance of a religion-related killing in 2019. This measure includes, but is not limited to, capital punishment, extrajudicial killings, and deaths resulting from torture or other physical injuries.

Religion-related killings perpetrated by governments were reported in three regions: the Asia-Pacific region (nine countries), the Middle East and North Africa (six countries) and sub-Saharan Africa (seven countries). Killings carried out by social groups or individuals – not including terrorists or parties to major armed conflicts – occurred in all five regions (39 countries overall). Religion-related killings by social groups or individuals were especially common in Asia and the Pacific (14 countries, or 28% of the region) and in sub-Saharan Africa (13 countries, 27%).

Detentions of individuals due to their religion took place in 70 countries, or 35% of countries included in this study. This measure picks up arrests, abductions and other kinds of physical detention reported as having been conducted arbitrarily or without due process; it does not include acts of war or mass kidnappings by terrorist groups, which are counted separately. In 2019, detentions were carried out much more often by government authorities (in 68 countries) than by nongovernment actors (in 16 countries). In the Asia-Pacific region, 26 of the region’s 50 countries (52%) had reported government detentions, while detentions carried out by social groups were reported in just six countries in the region. And government detentions were reported in the vast majority of countries in the Middle East and North Africa (17 of the region’s 20 countries), while detentions by social groups were reported in just two countries. In Algeria, for example, authorities arrested 17 Christians who were staging a peaceful sit-in to protest the closure of a church.49

The measure of displacements related to religion includes both internal and external displacements brought on by governments and social groups.50 In 2019, people in 37 countries around the world experienced displacement due to religious hatred or bias, with displacements caused by governments and social groups reported in an equal number of countries (21 each). Asia and the Pacific and sub-Saharan Africa were the only regions where 10 or more countries had incidents of displacement (12 and 10, respectively). In China, for example, a Jehovah’s Witness missionary was arrested and subsequently deported by authorities in 2019.51

Globally, Social Hostilities Related to Religion Decline in 2019, While Government Restrictions Remain at Highest Levels 1. In 2019, decline in number of countries with ‘very high’ government restrictions, social hostilities involving religion
2. Harassment of religious groups reaches new peak in 2019
Government versus social harassment of groupsHarassment of Christians and Muslims by regionTypes of physical harassment of religious groups by region
3. Median index scores for government restrictions, social hostilities involving religion declined or remained stable in most regions in 2019 4. Restrictions on religion in the world’s 25 most populous countries in 2019 Acknowledgments Methodology