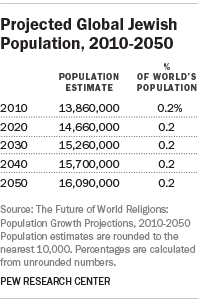 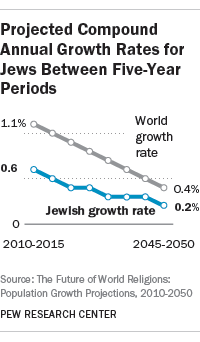 Over the next few decades, Israel is projected to pass the United States and become, by a sizable margin, the country with the largest Jewish population.

These projections are based on estimates of people who self-identify as Jewish when asked about their religion on national censuses and large-scale surveys. They do not include so-called “cultural” or “ethnic” Jews – people who have direct Jewish ancestry and who consider themselves at least partially Jewish but who describe themselves, religiously, as atheist, agnostic or nothing in particular. For the purposes of the religious group projections in this report, these people are categorized as unaffiliated. The worldwide estimate of Jews could be larger if this group were included, or smaller if a narrower definition of who is Jewish (such as an unbroken line of matrilineal Jewish descent) were used.55

This analysis looks at Jews as one religious group and does not estimate changes in the size of specific branches of Judaism.56

In the decades ahead, the annual growth rate of the Jewish population is expected to remain lower than the growth rate for the general world population. 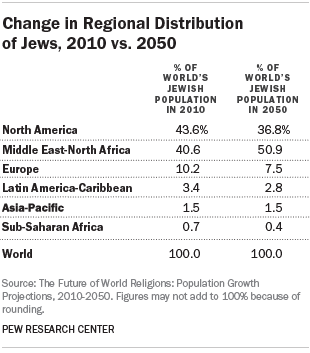 Jews were largely concentrated in North America (44%) and the Middle East-North Africa region (41%) in 2010. Most of the remainder of the global Jewish population was found in Europe (10%) and the Latin America-Caribbean region (3%).

In 2050, a majority of the world’s Jews (51%) are expected to live in the Middle East and North Africa (mostly Israel), while more than a third (37%) will live in North America. The share of the global Jewish population living in Europe is projected to decline to less than 8% by 2050. 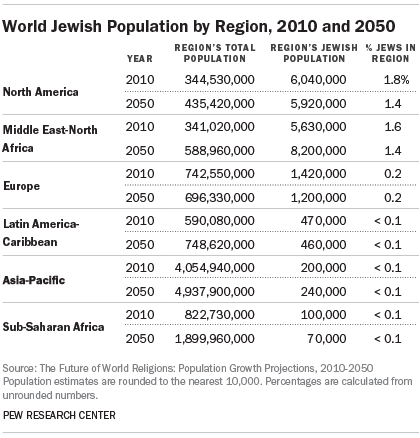 In the coming decades, Jews are not expected to increase as a share of the population in any region of the world. In the Middle East-North Africa region, for example, about 1.6% of the population identified as Jewish in 2010; 1.4% of the region’s 2050 population is expected to be Jewish. Although the Jewish share of the Middle East and North Africa is projected to decline, the absolute number of Jews in the region is expected to rise from 5.6 million in 2010 to about 8.2 million in 2050. 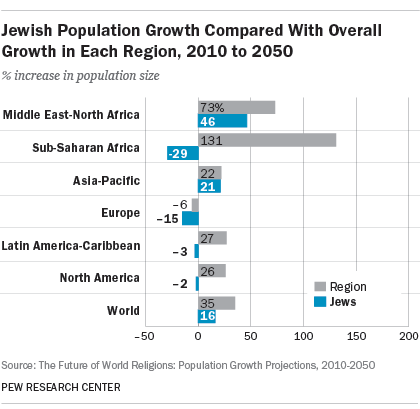 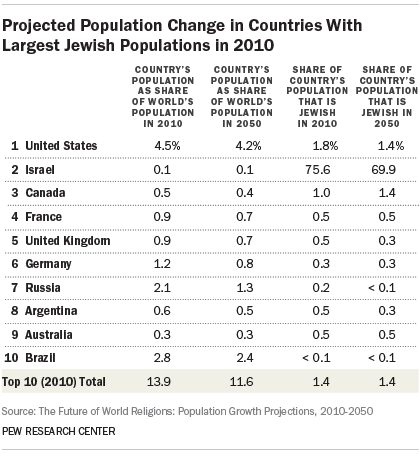 Nearly 95% of all Jews in the world lived in the countries with the 10 largest Jewish populations. Only Israel had a majority-Jewish population, with about three-quarters of its population (76%) identifying as Jewish in 2010. In the other nine countries on this list, about 2% or less of each nation’s people were Jewish as of 2010. 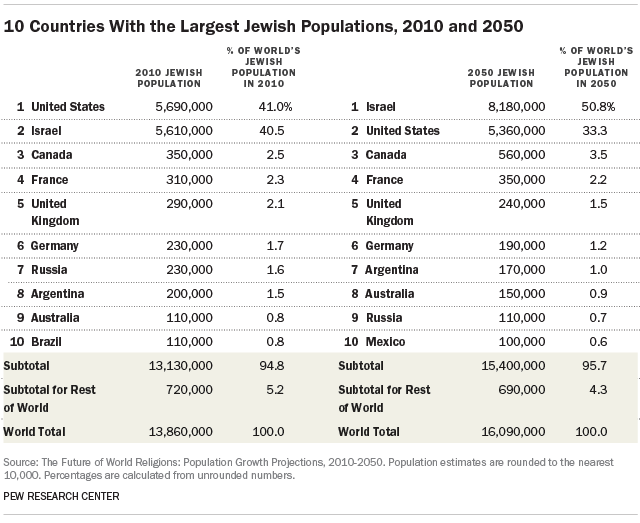 Demographic Characteristics of Jews That Will Shape Their Future 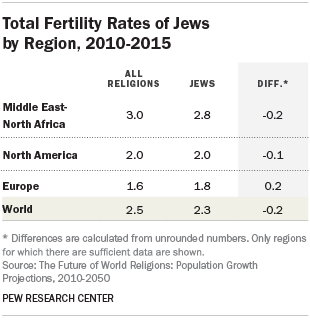 The Total Fertility Rate (TFR) of Jews from 2010-2015 (2.3 children per woman) is above replacement level (2.1, or the number typically considered necessary to maintain a stable population, all else being equal). It is relatively high in the Middle East and North Africa (2.8) and relatively low in Europe (1.8) and North America (2.0).

Jewish fertility is highest in Israel, with a Total Fertility Rate of 2.8 in the 2010-2015 period, but it is below replacement level in the United States (1.9). 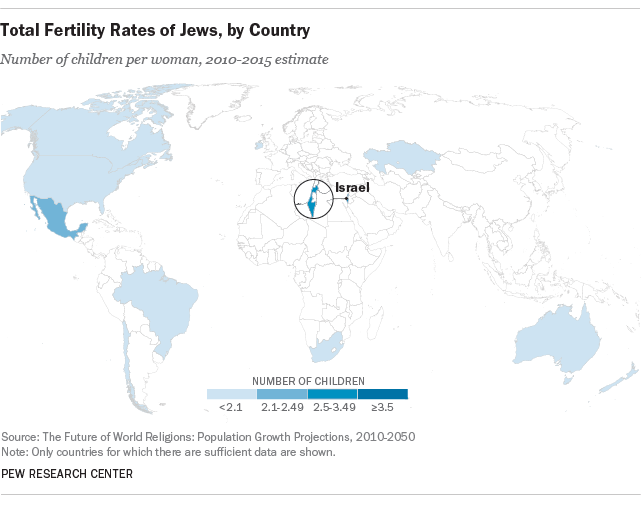 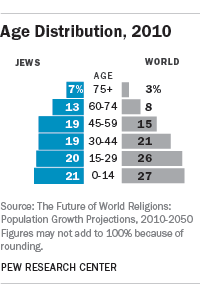 In each region where detailed age information for Jews is available, Jews were older than the regions’ overall populations in 2010. For example, in the Middle East-North Africa region, Jews had an older median age (32) than the regional median (24). North America had the smallest gap between Jews and the population as a whole; North America’s median age was 37 as of 2010, compared with 41 for Jews living in North America. 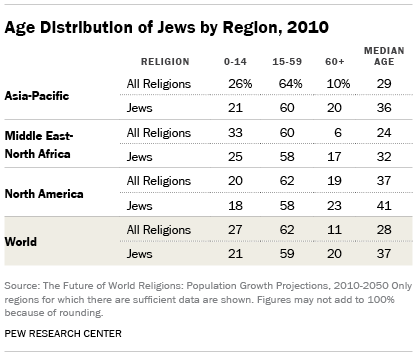 For decades, migration from countries throughout the world has been a major contributor to the growing population of Jews in Israel. Similarly, decades of Jewish migration from Europe to the United States and Canada has been an important factor in the growth of the Jewish population in North America.

However, Jewish migration has decreased significantly in recent years, including to Israel and North America. Because the population projections in this report use migration data from the most recent decade as a guide for forecasting the future, migration is not expected to have a large impact on Jewish populations at the regional level in the coming decades, at least compared with its impact during the 20th century.

When migration is factored into the projection model, Jews are expected to make up a slightly smaller share of North America’s population (1.4%) than if the projections did not include migration (1.5%).

In the Middle East-North Africa region, the projection models with and without migration do not show a sizable difference in the share of the population that is Jewish (about 1.4% in 2050 in either scenario).