This “other religions” category includes followers of religions that are not specifically measured in surveys and censuses in most countries: the Baha’i faith, Taoism, Jainism, Shintoism, Sikhism, Tenrikyo, Wicca, Zoroastrianism and many others. Because of the scarcity of census and survey data, the Pew Research Center has not estimated the size of individual religions within this category, though some estimates from other sources are provided in the sidebar below. As a whole, this group is expected to grow from about 58 million in 2010 to more than 61 million in 2050.

Spotlight on Other Religions

The “other religions” category is diverse and comprises all groups not classified elsewhere. It includes followers of religions that are not specifically measured in most censuses and surveys, including (but not limited to) the faiths listed below. Recent estimates of population sizes for these groups generally come from sources other than censuses and nationally representative surveys.

The Baha’i faith began in Persia (now Iran) in the 19th century. Baha’is are widely dispersed across many countries, with significant populations in India, the United States, Kenya and elsewhere. The Baha’i International Community reported more than 5 million adherents in 2010.

Jainism originated in India and dates back to at least the 6th century B.C.E. Today, the vast majority of Jains live in India, though significant numbers also are found among Indian immigrant communities in Kenya, the United States, Canada and the United Kingdom. The 2001 Indian census enumerated more than 4 million Jains in India, but some Jains have contended that number is a substantial undercount. According to estimates by the World Religion Database, there are about 250,000 Jains outside India.

Shintoism is a Japanese faith that has been part of religious life in Japan for many centuries. Although Shinto rituals are widely practiced in Japan, only a minority of the Japanese population identifies with Shintoism in surveys. The World Religion Database estimates there are almost 3 million Shintoists worldwide, with the vast majority concentrated in Japan.

Sikhism was founded at the turn of the 16th century by Guru Nanak in the Punjab, a region now split between India and Pakistan. More than nine-in-ten Sikhs are in India, but there are also sizable Sikh communities in the United Kingdom, the United States and Canada. The World Religion Database estimates there are a total of about 25 million Sikhs worldwide.

Taoism (also known as Daoism) traditionally is said to have been founded in the 6th century B.C.E. by Chinese philosopher Lao Tzu. Adherents live predominantly in China and Taiwan. The World Religion Database estimates there are about 8.7 million Taoists.

Wicca is a Pagan or neo-Pagan religion that gained popularity in the 20th century. It is practiced mostly in the United Kingdom and the United States. Reliable estimates of the number of Wiccans around the world are not available.

Zoroastrianism traditionally is said to have been founded by Zarathustra in Persia (now Iran) sometime before the 6th century B.C.E. Adherents live mainly in India and Iran. The World Religion Database estimates there are about 200,000 Zoroastrians worldwide.

Other faiths in this category include Cao Dai, I-Kuan Tao, Mandaeism, the Rastafari movement, the Rtana movement, Scientology and Yazidism, to list just a few. 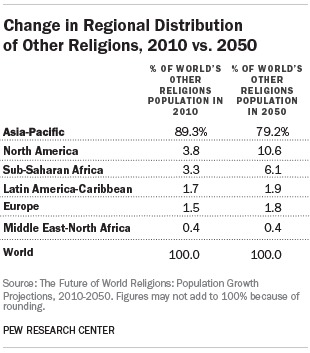 In the coming decades, the number of adherents of other religions is expected to decrease in the Asia-Pacific region, while the population belonging to other religions in each other region of the world is projected to grow. 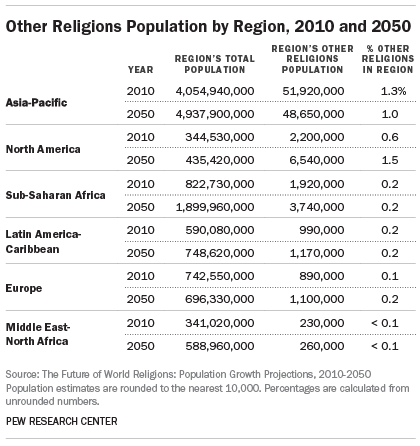 In sub-Saharan Africa, the number of adherents of other religions is expected to nearly double, rising to nearly 4 million people by 2050. 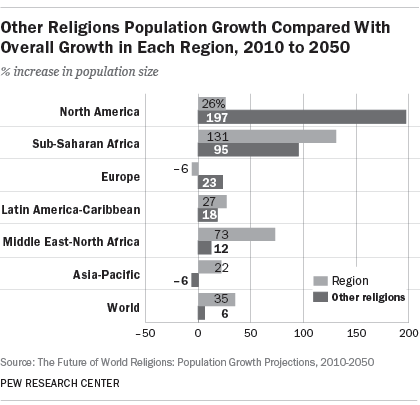 Between 2010 and 2050, the most rapid growth of the “other religions” population, in percentage terms, is projected to occur in North America (197%), which is more than seven times the expected increase in the region’s overall population (26%).

In Europe, the “other religions” population is expected to increase 23% between 2010 and 2050, even though Europe’s population as a whole will decrease in size (minus 6% growth).

Meanwhile, it is projected that the “other religions” population will decrease (minus 6% growth) in the Asia-Pacific region, while the region as a whole will grow 22% between 2010 and 2050.

Change in Countries With Largest Populations Belonging to Other Religions 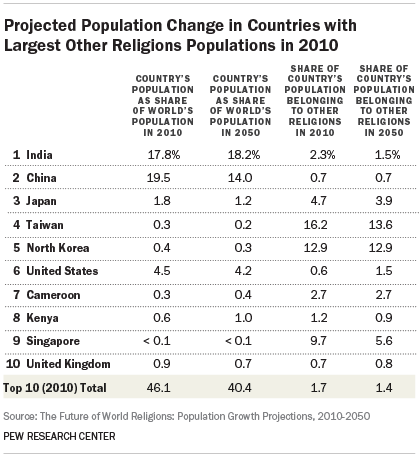 India is among the exceptions: The share of the world population living in India is projected to rise slightly between 2010 and 2050, remaining around 18%. But the percentage of India’s population that is in the “other religions” category is expected to decline from 2.3% in 2010 to 1.5% in 2050. The shares of the populations in Japan, Taiwan and Singapore belonging to other religions also are projected to decline in the coming decades.

With 26 million people (or about 42% of the world’s “other religions” population), India will remain home to the largest number of adherents of other religions in 2050.

Significant populations belonging to other religions are expected to remain in Asian countries in 2050, including China (9.3 million), Japan (4.2 million), North Korea (3.4 million) and Taiwan (2.7 million). 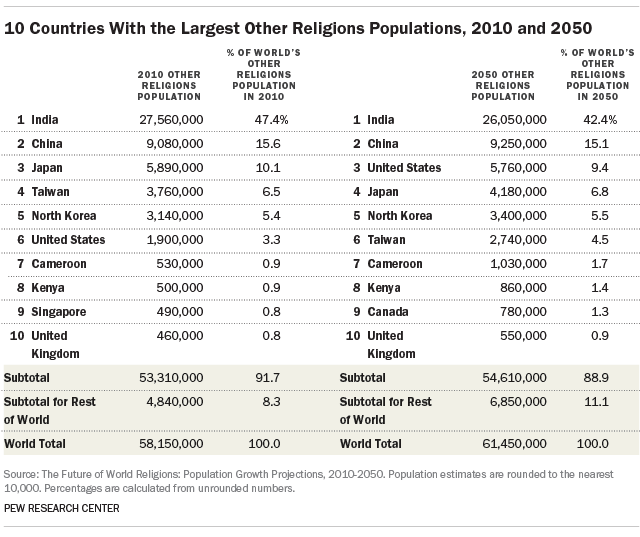 Adherents of other religions in the Asia-Pacific region also have lower fertility (TFR of 1.6) compared with the region’s overall population (2.1).52 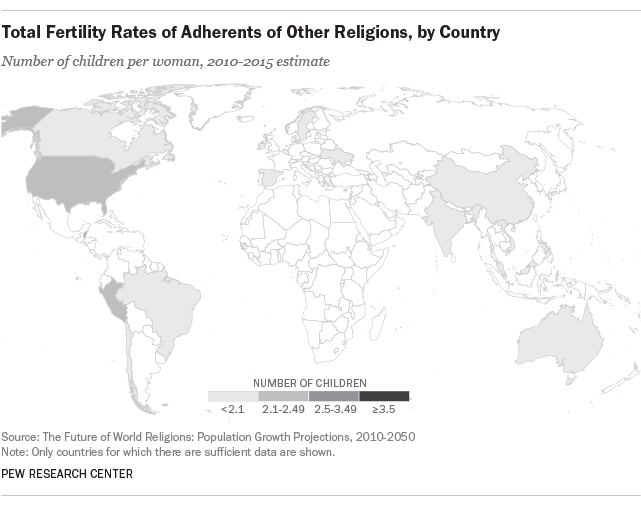 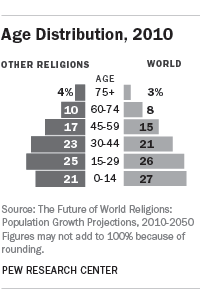 Religious switching was not modeled in most countries with a large number of people in the “other religions” category. Consequently, religious switching does not significantly influence global population projections for this group.

For most regions, migration is not expected to have a substantial impact on the growth of the “other religions” population. Europe is expected to experience modest growth in this category due to migration from Asia and the Pacific and sub-Saharan Africa.