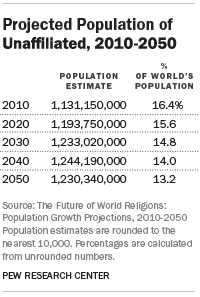 During the next few decades, the number of religiously unaffiliated people around the world is projected to grow modestly, rising from about 1.1 billion in 2010 to a peak of more than 1.2 billion in 2040 and then dropping back slightly.42 Over the same 40-year period, however, the overall global population is expected to increase at a much faster pace. As a result, the percentage of the world’s population that is unaffiliated is expected to drop, from 16% of the world’s total population in 2010 to 13% in 2050. 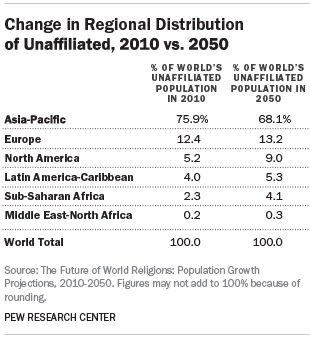 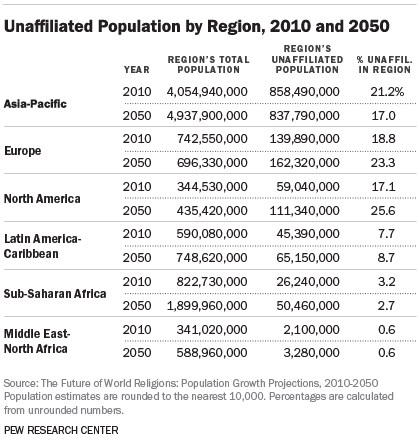 The percentage of the population that is unaffiliated is expected to increase slightly in Latin America and the Caribbean between 2010 and 2050 and remain about the same in sub-Saharan Africa and the Middle East and North Africa. 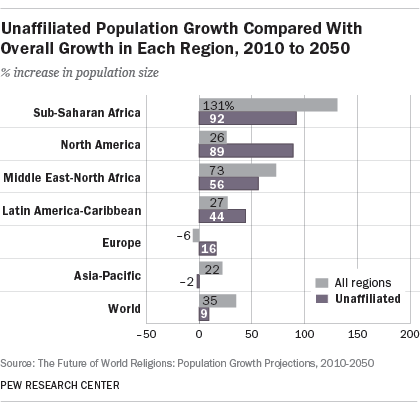 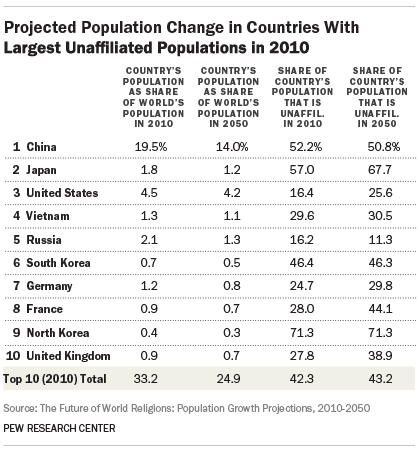 In six of these countries (Japan, the United States, Vietnam, Germany, France and the United Kingdom), the share of the population that is unaffiliated is expected to increase in the coming decades. But the potential growth of the unaffiliated is constrained by the fact that these are all countries with overall populations that are shrinking as a share of the world’s people. 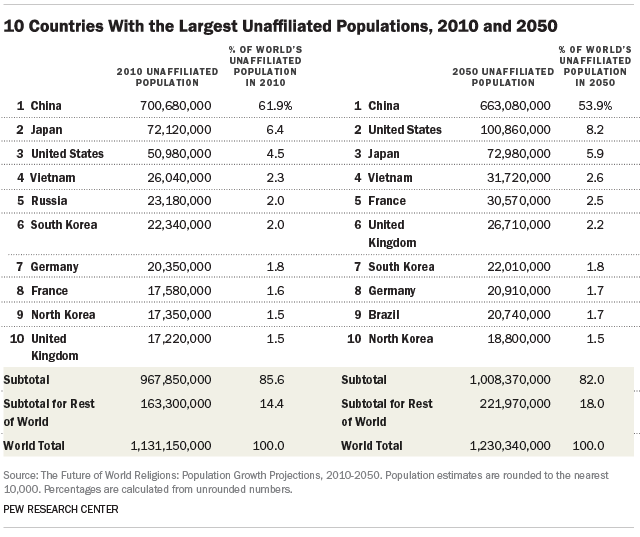 Demographic Characteristics of the Religiously Unaffiliated That Will Shape Their Future 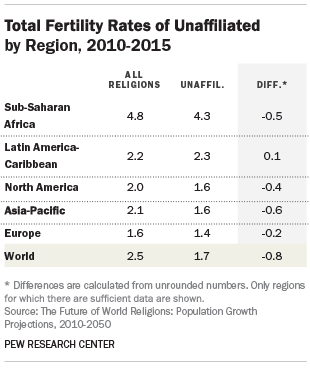 In general, the religiously unaffiliated have lower fertility levels than the world population overall. Globally, the Total Fertility Rate (TFR) for the unaffiliated is 1.7 children per woman in the 2010-2015 period, while the rate for the world’s entire population is 2.5. 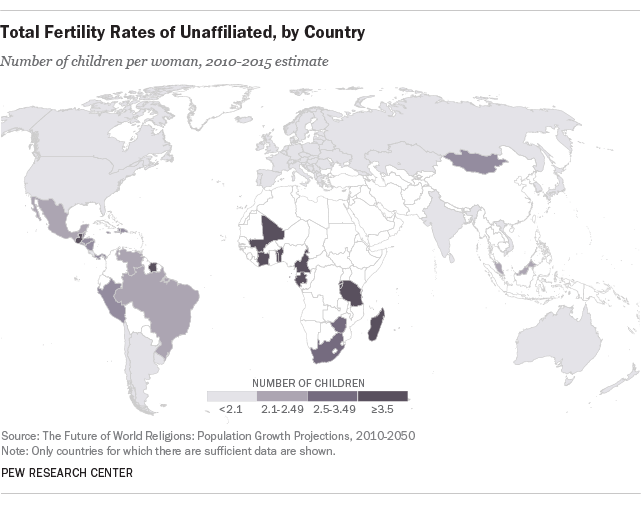 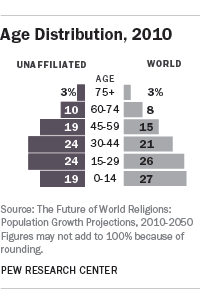 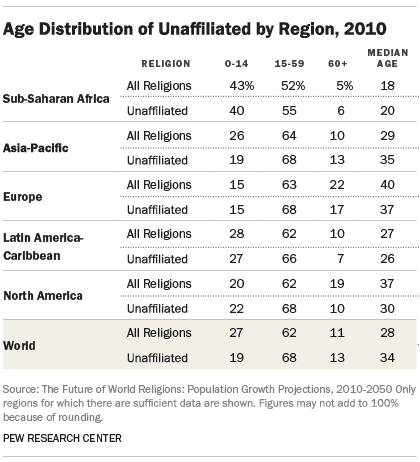 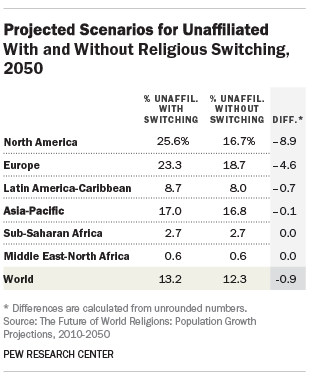 Comparing results between these two scenarios gives a sense of how much impact religious switching is expected to make on the size of the religiously unaffiliated population in the years to come.

Switching makes more of a difference in some regions than others. The projected impact of switching is greatest in North America, where the projections that include switching have the unaffiliated population about 9 percentage points higher than without switching (26% vs. 17%). 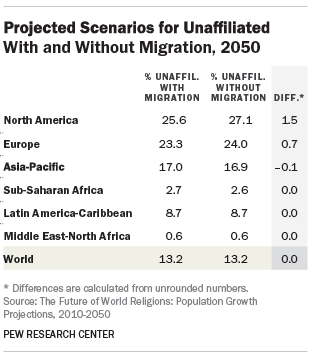 Slightly more than 850,000 people with no religious affiliation are expected to move from one region to another region between 2010 and 2015. About 270,000 are forecast to move from the Asia-Pacific region (mainly from China) to North America. An additional 180,000 religiously unaffiliated people are projected to move to North America from Latin America and the Caribbean.

Europe is another source of migrants with no religious affiliation; about 80,000 are expected to move to the Asia-Pacific region and 40,000 to North America between 2010 and 2015. These migration patterns are projected to continue in the decades ahead. (See the Methodology on page 166 for more information on how migration flows were estimated.)

Despite this movement of people with no religious affiliation, migration is expected to have a fairly modest impact on the unaffiliated share of the population in the regions for which there is sufficient data. The impact of migration can be seen by comparing results from the main projection scenario, which includes expected migration patterns, with an alternative scenario that does not attempt to take migration into account. 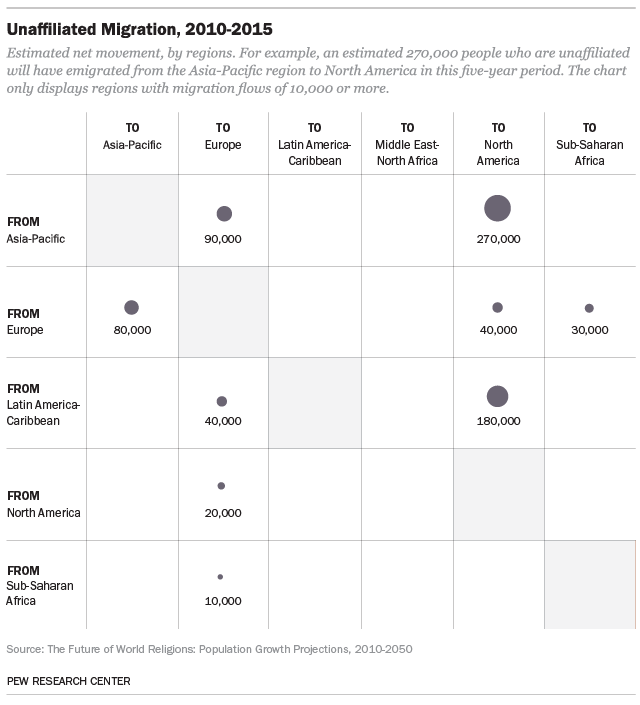 Next: Hindus
← Prev Page
Page1Page2Page3Page4Page5You are reading page6Page7Page8Page9Page10
Next Page →