This analysis does not project the size of religious subgroups. But in many Latin American countries, there has been considerable movement from Catholicism to various Protestant groups and denominations in recent decades, and this movement is expected to continue in coming decades.60 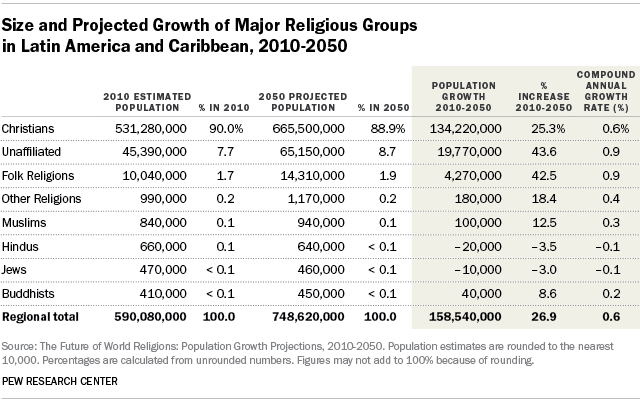 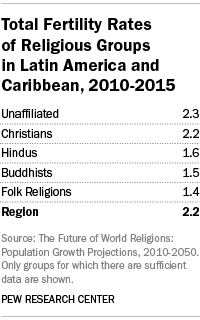 The Total Fertility Rate of the religiously unaffiliated population in Latin America and the Caribbean is 2.3 children per woman in the 2010 to 2015 period, higher than the rate for any other religious group in the region. The relatively high fertility of the unaffiliated contributes to the group’s expected growth as a share of the region’s population. The fertility rate of Christians in the region is 2.2, equal to the regional rate and slightly above the replacement level of 2.1 children per woman.

Total Fertility Rates for other religious groups were considerably lower than the regional average and the replacement level. 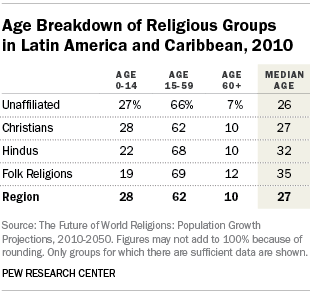 The median age of the religiously unaffiliated (26) in the Latin America-Caribbean region was slightly younger than that of Christians (27) and the overall population (27) in 2010. By contrast, the median age of Hindus (32) and those belonging to folk religions (35) was considerably higher. 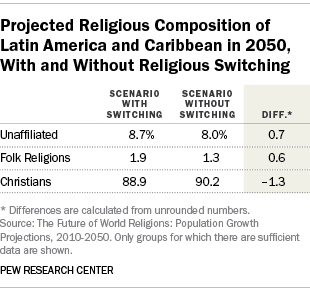 Religious switching also is expected to result in an increase in the proportion of people in Latin America and the Caribbean who identify with folk religions, including Candomblé, Umbanda and Spiritism.61

The Christian share of the region’s population in 2050 is expected to be modestly smaller as a result of religious switching.

Millions of migrants from Latin America and the Caribbean are projected to move out of the region in the decades ahead, and many are expected to move to the United States. But this northward migration is not expected to dramatically change the religious composition of the Latin America-Caribbean region. Consequently, the report does not show different projection scenarios with and without migration for this region. (For more information on the impact of migration on the demographic projections in this report, see Chapter 1.)