The analysis in this report is based on telephone interviews among a national sample of 5,000 adults. These respondents were originally among the 35,071 who were interviewed in the national telephone survey that served as the centerpiece of the Pew Research Center’s 2014 Religious Landscape Study; they were subsequently recontacted and asked additional questions. This “recontact” survey was conducted under the direction of Abt SRBI March 17-May 6, 2015. Interviews were conducted in English and Spanish; 2,013 respondents were interviewed on a landline telephone and 2,987 were interviewed on a cell phone.

Respondents who participated in the 2014 Religious Landscape Study’s original telephone survey were sorted into 15 recontact strata based on a variety of religious and demographic characteristics. In order to support the analytical goals of the project, certain groups (e.g., religiously intermarried respondents) were oversampled, while others were undersampled (see accompanying tables). After data collection, the data were weighted (as described below) such that all 15 strata are represented in roughly their proper proportion in the study’s final, weighted estimates. 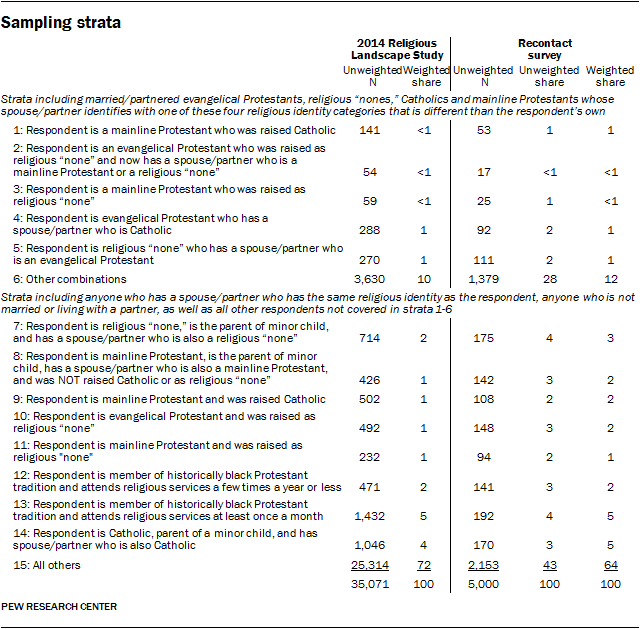 The national results included in this report are based on weighted estimates. The weighting was conducted in two stages. The first stage in the weighting process was the calculation of base weights, which was accomplished by multiplying the final base weight from the 2014 Religious Landscape Study’s original telephone survey by the inverse of the subsampling rate in the recontact survey. This step was carried out separately for each of the 15 recontact strata. For details on how the base weights were calculated in the 2014 Religious Landscape Study, see the methodological appendix in “America’s Changing Religious Landscape.”

The second stage of the weighting calibrated the base-weighted data to demographic benchmarks for the population covered by the survey (U.S. adults). This was performed via iterative proportional fitting (or “raking”). The raking procedure aligned survey respondents to population benchmarks on the following dimensions:

The demographic benchmarks for age, gender, education level, race, and state came from an analysis of the Census Bureau’s 2013 American Community Survey (ACS) one-year estimates, which was the most current data source available at the time the 2014 Religious Landscape Study data were weighted. The ACS parameters were calculated for adults ages 18 and older residing in households in the U.S., excluding those living in institutionalized group quarters. The population density parameter was derived from Census 2010 data and filtered on adults ages 18 and older residing in the U.S. The benchmark for religious affiliation was based on weighted estimates of self-reported data from the 2014 Religious Landscape Study. The telephone service parameter was constructed from model-based estimates released by the National Center for Health Statistics for July-December 2013, projected to the year 2014. These estimates were based on adults, ages 18 and older, living in households with a telephone (either landline or cell). The completion rate for this study was 37.2%. Taken together with the response rate to the original 2014 Religious Landscape Study, the cumulative response rate of the new survey is 3.9%.

Design effect and margins of error 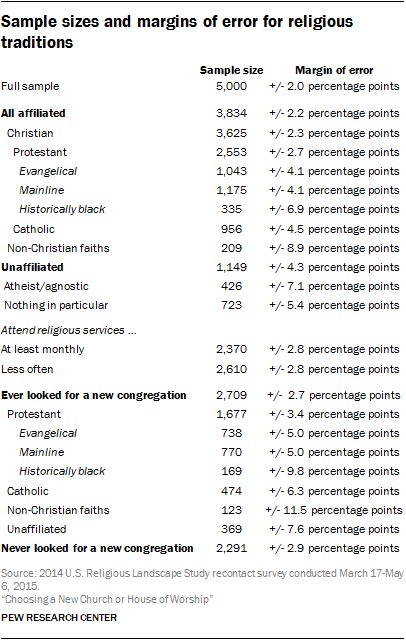 Weighting and survey design features that depart from simple random sampling tend to result in a loss of precision in survey estimates. This loss of precision, known as the design effect, is incorporated in all margins of error, standard errors and tests of statistical significance included in this report.

Choosing a New Church or House of Worship 1. The search for a new congregation 2. Religious attendance fluid for many Americans Acknowledgments
Methodology
Sample designWeightingDesign effect and margins of error