Those who attend religious services more often now than in the past offer mostly religious reasons as the motivation for their return to church. For example, many say they felt a need for God or that their increased attendance reflects an overall increase in their personal religiosity. Among those who attend less often now than in the past, the most commonly offered reasons for their falloff in attendance are practical in nature, such as being too busy to attend regularly.

The remainder of this chapter provides details about the reasons people give for the ebbs and flows in their religious engagement. It concludes with a discussion of the reasons religious “nones” give for having disassociated with their childhood faiths.

Two-thirds of Christians say they now attend religious services at least once or twice a month, including 35% who say there was a time during their adult life when they did not attend as often as they do now. Among Christian traditions, 44% of evangelical Protestants, 33% of members of the historically black Protestant tradition, 31% of mainline Protestants and 28% of Catholics say they now go to church regularly – but that they did not always attended religious services with the same frequency.

At the same time, the survey shows that all of these Christian groups include people who do not attend religious services regularly and whose attendance has fallen off over time. For example, 27% of mainline Protestants, 20% of Catholics and 15% of those in the evangelical and historically black Protestant traditions say they now attend religious services no more than a few times a year, and that there was a time in their adult lives when they attended more regularly than they do now.

The vast majority of religious “nones” (92%) say they attend religious services no more than a few times a year, including 30% who say they once attended more often than they do now and 61% who never went to services more frequently.

Among all U.S. adults, about half who now attend religious services regularly (53%) say their attendance was not always as high as its current level. And 45% of those who do not attend worship services with any regularity say they used to go at least somewhat more often. 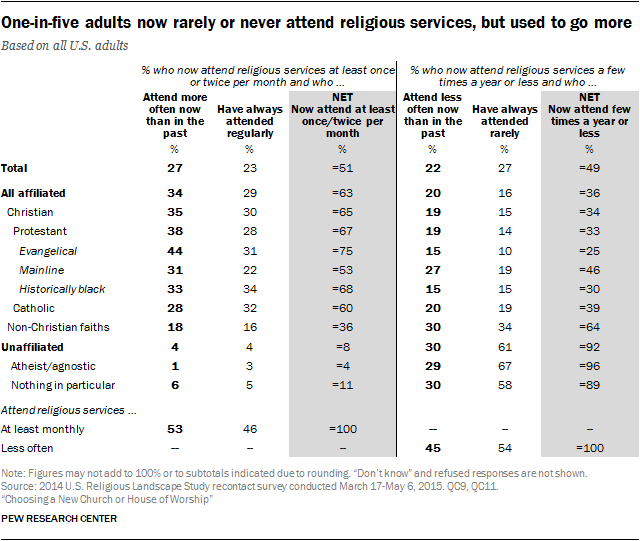 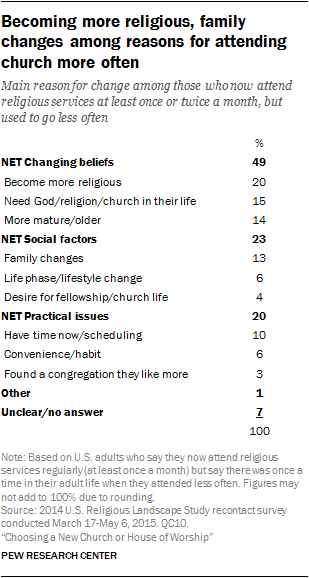 The 27% of Americans who say they now attend religious services regularly (at least once or twice a month) but used to attend less often were asked to explain, in their own words, why their rate of religious attendance has increased. About half of respondents in this group (49%) mention changes in their personal religious beliefs as the main reason for attending more often – including one-in-five who say they became more religious. Others say they found themselves desiring God or religion in their life or realized religion was important as they got older or grew more mature.

About a quarter (23%) mention social factors, including changes in family structure (such as marriage or the birth of a child), entering different phases of life (e.g., going to college, joining the military, etc.) or a desire for fellowship or community.

And one-in-five mention practical changes, such as having a work schedule that permits them to attend church more often now than in the past.

More than one-in-five Americans (22%) attend religious services no more than a few times a year, but say there was once a time in their lives when they attended more often. When asked an open-ended question about why their rate of religious attendance has declined, fully half cite practical issues as the reason. This includes one-in-five who say they are too busy to attend religious services regularly (e.g., because of their work schedule) and one-in-ten who say attending church is not high on their list of personal priorities (e.g., because they have “gotten out of the habit” or are “too lazy” to attend regularly).

About one-in-four infrequent attenders who used to attend more often (26%) say something changed with their own personal beliefs or with their church. And an additional 17% mention social factors; in some cases, they say they used to attend religious services more often in order to accompany a family member or friend who no longer requires or expects their company.

Religious ‘nones’ give variety of reasons for disaffiliation from religion 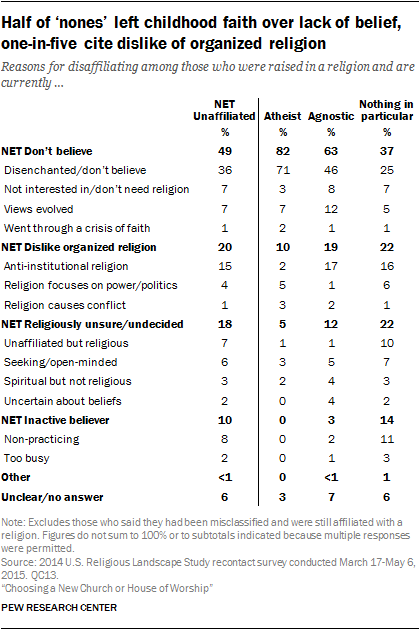 Roughly eight-in-ten religious “nones” say they were raised with a religious affiliation. When asked why they no longer identify with a faith, they offer a variety of explanations. About half say they stopped believing in the religion in which they were raised or have rejected religious beliefs as a whole (49%), but nearly as many give other reasons for disaffiliating.

There are clear patterns in the reasons “nones” give for disaffiliating, based on how they describe their current religious identity. For example, most of those who now identify as atheists (82%) say a lack of belief spurred them to become unaffiliated. By contrast, fewer than half of respondents who describe their religion as “nothing in particular” (37%) cite lack of belief as the reason they no longer affiliate with a religion.

Choosing a New Church or House of Worship 1. The search for a new congregation
2. Religious attendance fluid for many Americans
Many evangelicals say they attend church more often now than in the pastChanging beliefs lead many to attend services more oftenShifting circumstances often lead people to attend church less frequentlyReligious ‘nones’ give variety of reasons for disaffiliation from religion
Acknowledgments Methodology