To find a church or house of worship that is right for them, many Americans say they attend services with congregations they are considering and talk to current members, friends or colleagues about recommending a house of worship. By comparison, fewer people use the internet or make phone calls to prospective congregations. This may be because some of the factors people say they value the most in choosing a congregation – the quality of sermons, the style of services and a welcoming leadership – are difficult to assess over the phone or on a website.

This chapter explores details about Americans’ searches for new religious congregations – beginning with why they look.

Half of Americans have looked for a new congregation 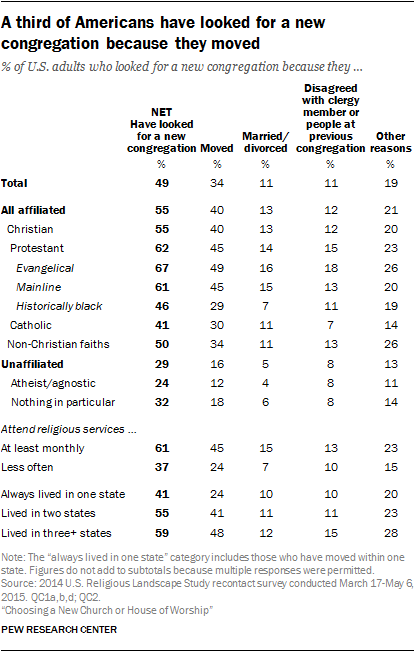 Compared with those who have looked for a new house of worship after moving, fewer Americans say a marriage or divorce (11%) or a disagreement with clergy or fellow congregants at their previous church (11%) prompted them to search for a new congregation.

When asked whether they had ever looked for a new congregation for reasons other than a move, a change in marital status or a disagreement at a previous church, 19% indicate they had.3

Looked at another way, the half of Americans who have never searched for a new church or other house of worship are more than twice as likely as others to currently identify as religious “nones” (31% vs. 13%). And only about four-in-ten (39%) of those who have never searched say they now attend religious services at least once a month, compared with 63% of Americans who have looked for a new congregation at some point in their adult lives. 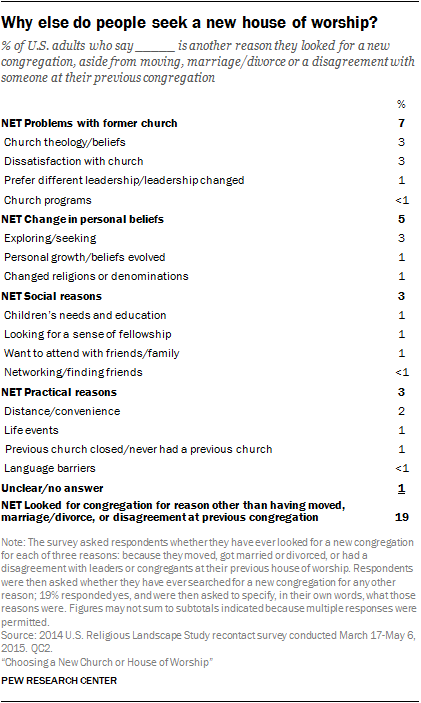 Roughly one-in-five adults say they have looked for a new congregation for some other reason (besides moving, a change in marital status, or a disagreement with clergy or members of their previous congregation). Among the other reasons people give for seeking a new congregation are problems with the church they left (7%) and changes in their personal religious beliefs (5%).

In addition, some respondents mention social reasons (such as a desire to attend services with a specific friend or family member) or practical considerations (e.g., getting to their old church was no longer convenient, or finding a new job made attending their previous congregation impractical). 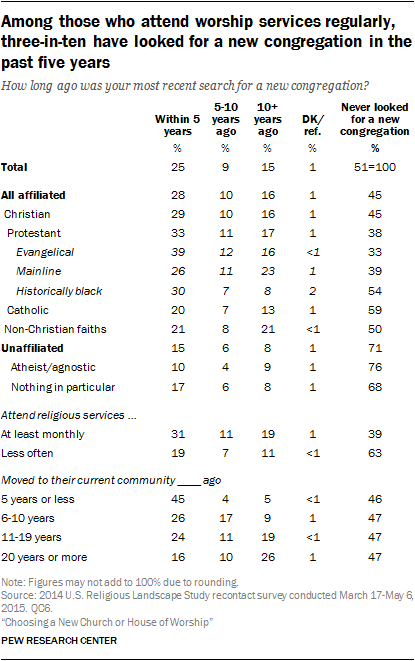 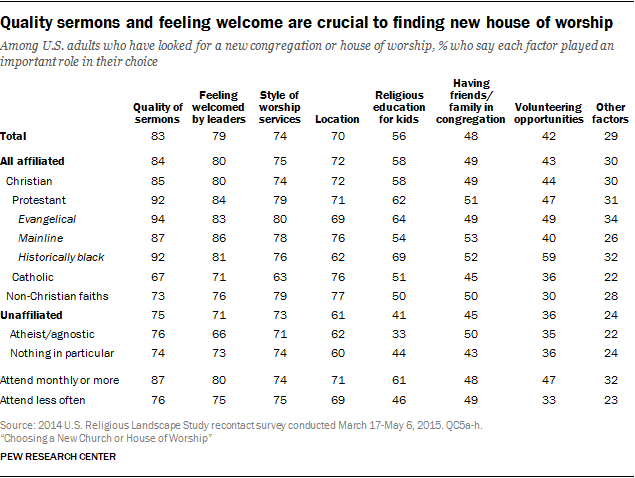 In addition to the seven factors mentioned explicitly in the survey (e.g., quality of sermons, being welcomed by clergy, etc.), respondents also were asked whether there were any other elements that factored importantly in their decision about which congregation to join; 29% indicated that there were. These included some mentions of aspects of the congregation’s programs or leadership (by 13% of people who have ever looked for a congregation), including particular teachings or political stances – for example, that they were looking for a church that offers “preaching from the Bible,” that has “conservative Christian values” or that is “positive on civil rights.”

Another one-in-ten Americans who have searched for a new house of worship volunteer, in their own words, that the church environment played an important role. This includes 6% who say a warm sense of fellowship was an important factor in their choice, 3% who say the music or some other aspect of the worship style was very important to them and 1% who mention the size of the congregation or its demographic characteristics (both those who were looking for a “diverse population” as well as others who wanted a church with “people who look like me”).

An additional 5% of respondents who have looked for a new congregation mention additional elements like convenience (e.g., “convenience of service times”) or family situations (e.g., having “a place for my teenagers” or “acceptance of children”) as factors in their decision.

For most, personal contact key to search for new house of worship 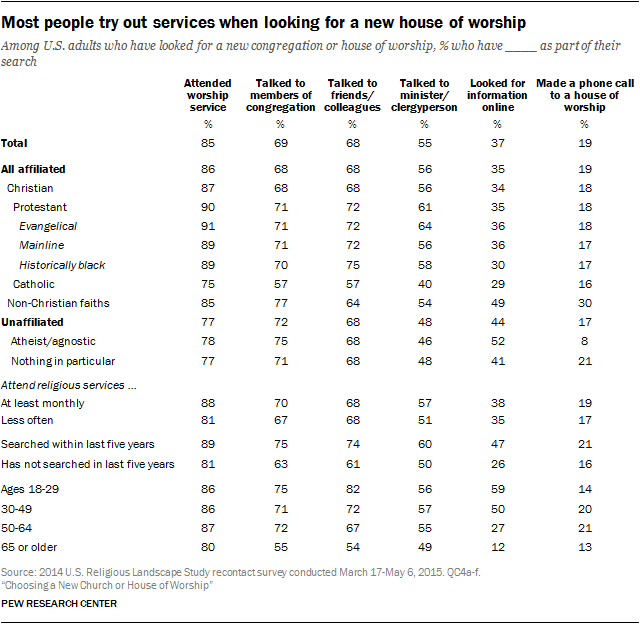 Using the internet to find information about potential congregations, although still far from a universal tactic, seems to be getting more common. Nearly half (47%) of those who have looked for a new congregation within the last five years say they relied on the internet as part of their search, compared with 26% of those whose last search was more than five years ago.4

Protestants are more likely than Catholics to talk to a minister or priest (61% vs. 40%) when searching for a new congregation. In fact, compared with members of other religious traditions, Catholics are generally among the least likely to use any of these strategies when searching for a new house of worship, perhaps due to the geographically based parish system used by the Catholic Church.

In search for congregation, many also explore different denominations 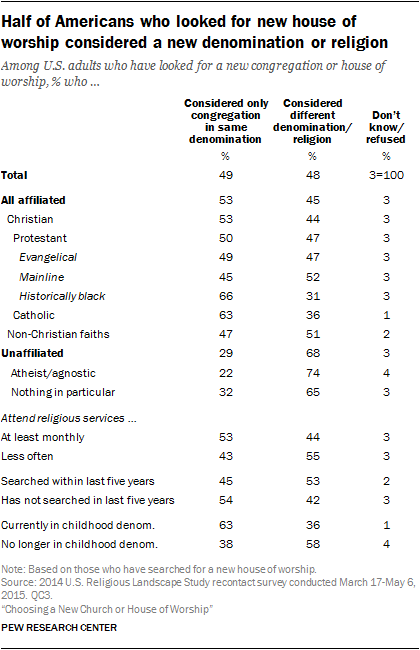 About half of U.S. adults who have looked for a new congregation (48%) considered changing denominations or religions when looking.

Considering a switch when looking for a new congregation is relatively uncommon among Catholics and members of historically black Protestant churches; solid majorities in these groups who have looked for a new congregation say they considered churches only in the same denomination. Only about one-in-three in each group say they explored changing denominations or religions.

By contrast, about half of both mainline (52%) and evangelical (47%) Protestants who have looked for a new church say they thought about changing denominations or religions during their search.

Only about three-in-ten people who are currently religious “nones” have ever looked for a new congregation. But among those who have, about two-thirds (68%) say they considered joining a new denomination or religion when they looked. Some in this group may have been raised in a particular religion before searching for something different, but ultimately moved away from religious affiliation altogether. 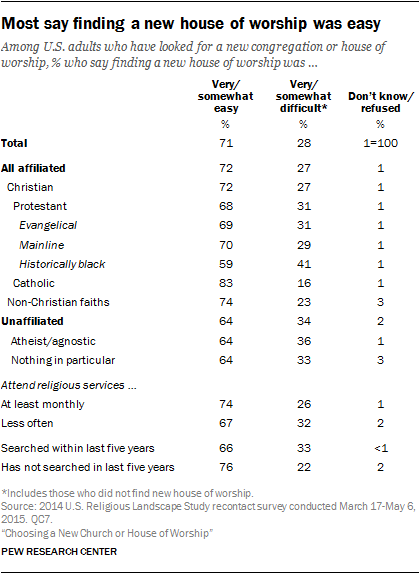 Catholics find it especially easy to find a new congregation, with 83% indicating they encountered little difficulty when looking for a new church. Members of historically black Protestant churches report some degree of difficulty in finding a new house of worship; about four-in-ten (41%) say they found the task to be very or somewhat difficult. 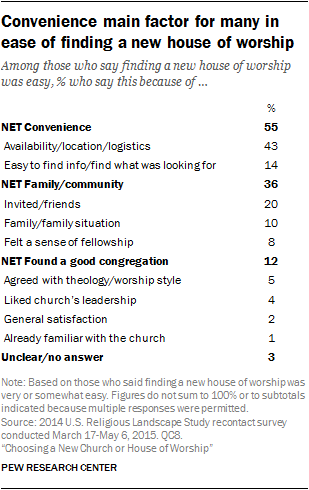 Americans who have searched for a new congregation recently say they have had somewhat more difficulty than those who looked more than five years ago. But still, two-thirds of those whose search was in the last five years (66%) say finding a new house of worship was very or somewhat easy.

Among the roughly seven-in-ten Americans who say it was either very or somewhat easy to find a new congregation, more than half explain, in their own words, that they were able to find a suitable house of worship because their new congregation was conveniently located and easy to get to or because it was easy for them to find information and locate what they were looking for.

About a third of those who say finding a new house of worship was easy mention family- or community-related reasons; many were invited by friends to join a church, while others say they quickly responded to a sense of fellowship at their new congregation. 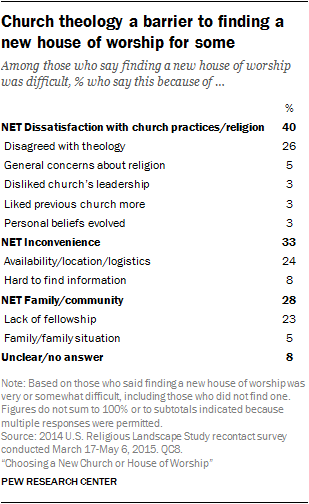 Roughly one-in-ten (12%) say it was easy to find a new church or other house of worship because of some specific aspect of the new congregation that appealed to them, such as its theology, worship style or leadership.

Of the roughly three-in-ten who cite family or community related reasons, many say they did not find a welcoming congregation; a smaller share say it was difficult for them to find a house of worship that was agreeable both to them and to their family members.

Next: 2. Religious attendance fluid for many Americans
← Prev Page
Page1You are reading page2Page3Page4Page5
Next Page →