Another widely accepted indicator of religious commitment is daily prayer. Pew Research Center has collected data on frequency of prayer in 84 countries. In 40 of those countries, there is no significant difference in levels of daily prayer reported by men and women.

But in 43 countries (just over 50% of the total), women report that they pray daily at greater rates than men, sometimes by margins as wide as 25 percentage points (in Greece) or 20 points (in Italy). In 29 of those 43 countries, the share of women who say they pray at least once a day exceeds the share of men who say the same by 10 percentage points or more. As a result, when all 84 countries are considered together, women surpass men in saying they pray daily by an average of 8 percentage points. This average gender gap is the largest one among all the indicators of religious commitment analyzed for this report.

Israel is the only country where men report praying daily more often than women (30% vs. 24%). This finding reflects, in part, the large population of Orthodox Jews in Israel, as does the pattern seen in weekly attendance. 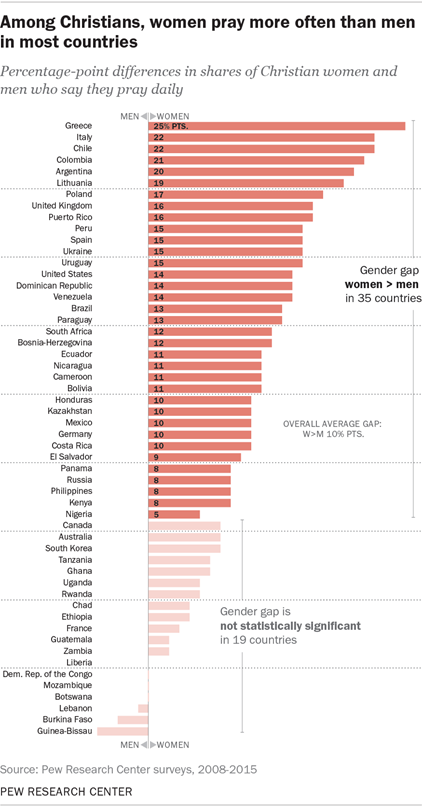 Muslim women are as likely as Muslim men to report engaging in daily prayer.22 This differs from the attendance pattern, in which Muslim men are significantly more likely to report attending worship services weekly. In the vast majority of countries (34 out of 40) where Muslim populations were surveyed on this topic, similar shares of Muslim men and women (71% and 72%) report praying every day. In three of the countries – Uzbekistan, Kosovo and the Palestinian territories – women pray more often than men. And in three other countries – Mozambique, Tanzania and Senegal – Muslim men are more likely than women to report engaging daily in prayer. 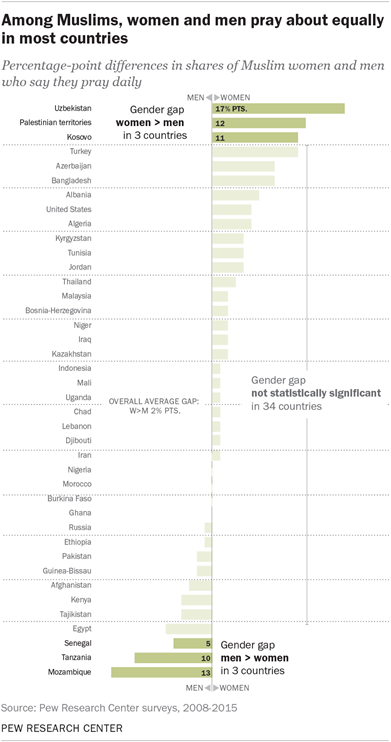 Classifying people by whether they do or do not say they pray at least once a day helps distinguish between more devout and less observant followers of many religions. However, this distinction may not adequately measure private devotion in Islam because for Muslims, praying five times daily, not just once a day, is a requirement, or “pillar,” of religious observance for the faithful. Mindful of this, when Muslim men and women were asked in Pew Research Center surveys about daily prayer, they had an opportunity to say how often they prayed during the day. The results indicate that whether prayer was done five times a day or once a day, the gender differences are about the same. On average, 56% of Muslim women and 57% of Muslim men say they pray five times daily, while 72% of women and 71% of men say they pray at least once a day.23

Among Hindus, daily prayer is more common among women than men by 29 percentage points in the U.S., but the gender differences among Hindus in India are not statistically significant.24 And among Buddhists, women also report a higher rate of daily prayer than men, but the difference is statistically significant only in Japan, where Buddhist women and men vary in their prayer frequency by 10 percentage points. 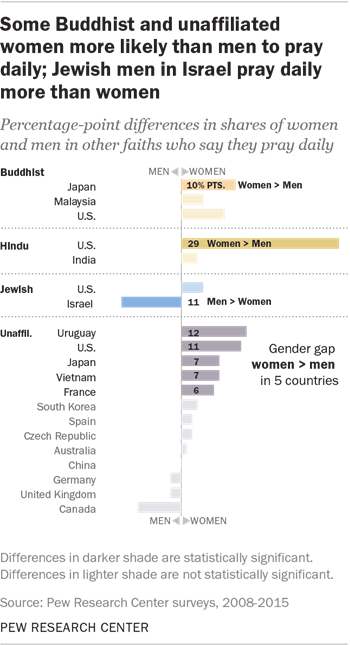 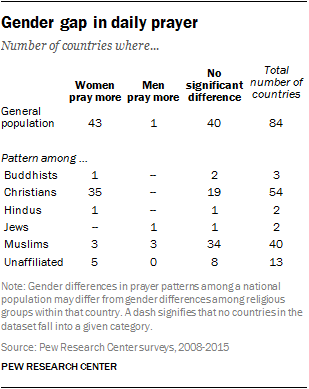 Among Jews, gender differences are statistically significant in Israel but not the United States. In Israel, men are more likely than women to pray at least once a day by 11 percentage points. This pattern is evident among Orthodox Jews as well as Masorti (traditional) Jews in Israel.25

Next: 4. Religion is equally or more important to women than men in most countries
← Prev Page
Page1Page2Page3You are reading page4Page5Page6Page7Page8Page9Page10Page11
Next Page →

The Gender Gap in Religion Around the World 1. Women more likely than men to affiliate with a religion 2. Gender differences in worship attendance vary across religious groups
3. Women report praying daily at higher rates than men
4. Religion is equally or more important to women than men in most countries 5. Women and men about equally likely to believe in heaven, hell and angels 6. In the U.S., religious commitment is high and the gender gap is wide 7. Theories explaining gender differences in religion About this report Acknowledgments Appendix A: Methodology