This distinctive pattern at the country level is largely explained by religious norms that prioritize male participation in Muslim and Jewish worship services. In most Islamic societies, Muslim men are expected to attend communal Friday midday prayers in the mosque. Women, however, can fulfill the Friday prayers obligation individually, either inside or outside the mosque. Likewise, the Orthodox Jewish tradition does not count women as part of a minyan (at least 10 men needed to hold a service). When Muslim and Orthodox Jewish women do attend communal worship services, they often pray separately from men.

Although Muslim and Orthodox Jewish men are expected to attend worship services, attendance may still be a valid indicator of men’s religiousness. On the other hand, the fact that women do not attend as frequently or participate as fully as men in some countries does not necessarily mean they are less pious. Indeed, as discussed in the next chapter, Muslim women and men are about equally likely to report that they pray at least once a day.

Pew Research Center has data specifically on Muslim attendance patterns in 39 countries. In most of them, Muslims are the largest religious group in the population. Across these 39 countries, a much larger share of Muslim men (70%) than women (42%) report attending services weekly, an average gender gap of 28 points.

Among Muslims in the United States, the gender gap in attendance is smaller than the average gap across all 39 countries: 57% of U.S. Muslim men attend weekly compared with 37% of U.S. Muslim women, a 20-point gap. 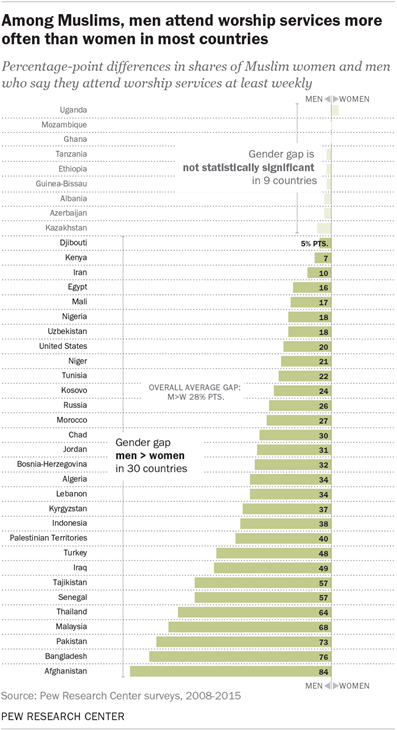 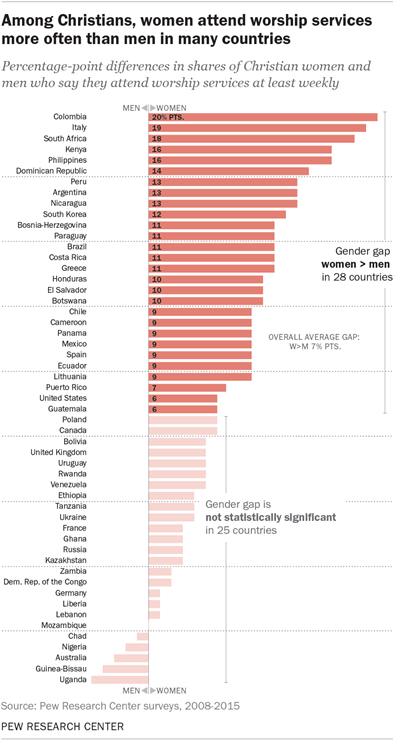 There are no countries where Christian men are significantly more likely than Christian women to attend services weekly. 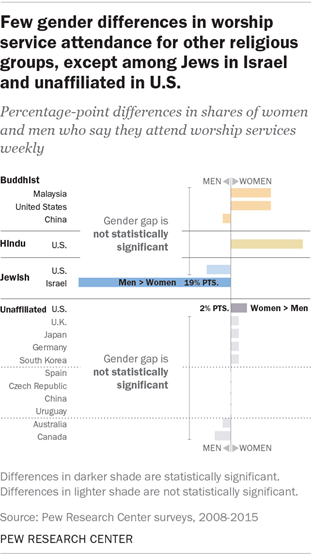 Israel and the United States together hold about 80% of the world’s Jewish population and they are the two countries with sufficient numbers of Jews to analyze differences in men’s and women’s attendance at worship services.

In Israel, the share of Jewish men who report attending services weekly is 19 percentage points larger than the share of women who say they attend weekly. This pattern among all Jews is driven primarily by adherents of the Orthodox tradition, who compose roughly 22% of adult Israeli Jews. Indeed, when the gender gap is calculated separately by Jewish subgroups in Israel, men attend more than women among self-identified Orthodox Jews (Haredi and Dati) and traditional Jews (Masorti Jews, who make up 29% of adult Israeli Jews).18

Among American Jews, the share of men who attend services weekly is 3 percentage points larger than the share of women who attend weekly, a gender gap that is not statistically significant in this case.19 There are only a small number of countries for which Pew Research Center has data on a large enough number of Hindus and Buddhists to permit analysis of the gender gap in attendance.20 This study finds no significant gender differences among Hindus in the United States. Similarly, differences are not significant among Buddhist men and women in the three countries for which the Center has data: Malaysia, China and the United States. 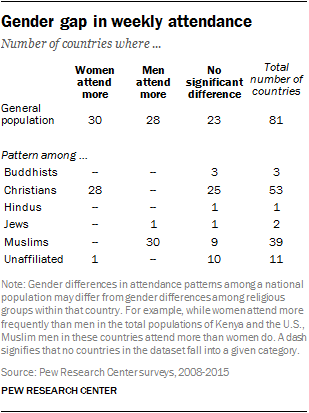 Pew Research Center has collected data in 11 countries on worship attendance rates among the religiously unaffiliated, who identify as atheist, agnostic or “nothing in particular.” In the United States, there is a small gender difference of 2 percentage points between unaffiliated women (5%) and men (3%) who report attending worship services weekly.[21. Pew Research Center’s 2014 U.S. Religious Landscape Study included a very large sample of unaffiliated respondents, providing the statistical power to ensure that this 2-point difference is statistically significant.

The Gender Gap in Religion Around the World 1. Women more likely than men to affiliate with a religion
2. Gender differences in worship attendance vary across religious groups
3. Women report praying daily at higher rates than men 4. Religion is equally or more important to women than men in most countries 5. Women and men about equally likely to believe in heaven, hell and angels 6. In the U.S., religious commitment is high and the gender gap is wide 7. Theories explaining gender differences in religion About this report Acknowledgments Appendix A: Methodology