The first indicator of religious commitment examined in this study is religious affiliation, that is, whether people report identifying with a faith group. Among women and men ages 20 and older, 83.4% of women and 79.9% of men across 192 countries and territories are religiously affiliated, according to estimates made for Pew Research Center’s 2015 report “The Future of World Religions: Population Growth Projections 2010-2015.”13

In about a third of the 192 countries (61), women are at least 2 percentage points more likely than men to have a religious affiliation. In the remaining countries (131), women and men are about equally likely to affiliate with a religious group. In 83 of the 131 countries, more than 98% of both men and women identify with a religious group, making affiliation nearly universal with little room for any gender gap.14 Notably, there are no countries in which men are more religiously affiliated than women by 2 percentage points or more. 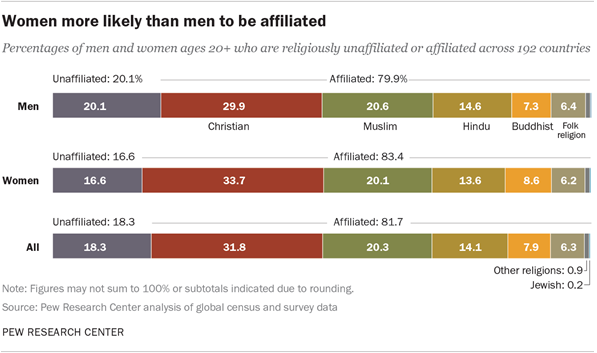 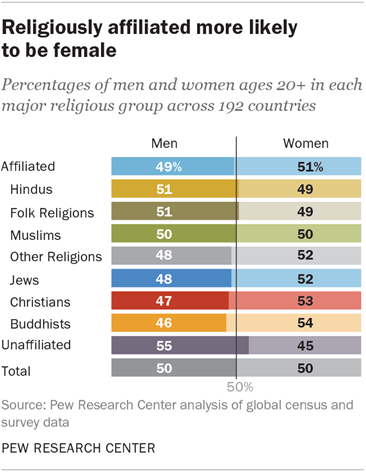 The distribution of men and women varies within different religious groups. Women are slightly more numerous among Buddhists (54%), Christians (53%) and Jews (52%). Women are slightly less prevalent among Hindus (49%) and adherents of traditional or folk religions (49%).15

Around the world, men markedly outnumber women (55% vs. 45%) among religiously unaffiliated populations, which include atheists, agnostics and people who say their religion is “nothing in particular.”

While it is possible to measure lack of religious affiliation using censuses and large-scale demographic surveys, these sources do not generally include “atheist” as a response category in religion questions. Additionally, in many countries there are too few atheists in general population surveys to reliably analyze the characteristics of atheists. However, Pew Research Center has collected sufficient data to analyze the gender composition of people who self-identify as atheists in eight countries: Australia, the United Kingdom, China, France, Germany, Spain, the United States and Uruguay.16 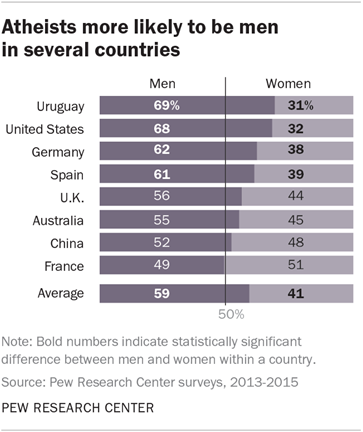 More than two-in-three atheists are men in the United States (68%) and Uruguay (69%). Men also represent a clear majority of the atheist population in Germany (62%) and Spain (61%). However, in France, China, Australia and the United Kingdom, the gender gap among atheists is smaller (and not statistically significant). Across all eight countries, the average share of atheists who are male is 59% if the atheist numbers from each country are given equal value.17

The Gender Gap in Religion Around the World
1. Women more likely than men to affiliate with a religion
2. Gender differences in worship attendance vary across religious groups 3. Women report praying daily at higher rates than men 4. Religion is equally or more important to women than men in most countries 5. Women and men about equally likely to believe in heaven, hell and angels 6. In the U.S., religious commitment is high and the gender gap is wide 7. Theories explaining gender differences in religion About this report Acknowledgments Appendix A: Methodology